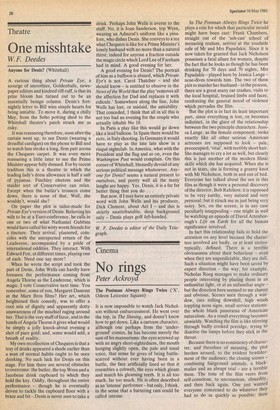 Anyone for Denis? (Whitehall) A curious thing about Private Eye, a scourge of smoothies, Goldenballs, news paper editors and kindred riff-raff, is that its prize bloom has turned out to be an essentially benign column. Denis's fort nightly letter to Bill wins simple hearts for being amiable. To move it, during a chilly May, from the Soho potting shed to the Whitehall theatre's patch struck me as risky.

It was reassuring therefore, soon after the curtain went up, to see Denis (wearing a dreadful cardigan) on the phone to Bill and to watch him stroke a long, firm putt across the Chequers carpet. It was even more reassuring a little later to see the Prime Minister appear fully dressed. For by recent tradition this is a theatre in which the leading lady's dress allowance is half a suit of pyjamas. Finchley electors and the staider sort of Conservative can relax.

Except when the butler's trousers come down, there is none of that, Well, she wouldn't, would she?

On paper the plot is tailor-made for Private Eye's version of Denis. Believing his wife to be at a Euro-conference, he calls in one or two of what Nathaniel Gubbins would have called his witty wortn friends for a tincture. Their arrival, plastered, coin cides with the unexpected return of the Leaderene, accompanied by a pride of international oddities. They interact. With Edward Fox, at different times, playing one of each. Need one say more?

When he wrote the script and took the part of Denis, John Wells can hardly have foreseen the performance coming from Angela Thorne as the Leaderene, which is magic. I vote Conservative next time. You remember, some of you, Margaret Dumont in the Marx Bros films? Her art, which heightened their comedy, was to offer a cool mix of dignity and apparently dotty unawareness of the mischief raging around her. That is the very stuff of farce, and in the hands of Angela Thorne it gives what would be simply a jolly knock-about evening a shot of pure gold; and, some would add, a breath of reality.

My own recollection of Chequers is that a tray of drinks appeared a shade earlier than a man of normal habits ought to be seen drinking. No such luck for Denis on this stage. For him there are several obstacles to overcome; the butler, the top Wren and a Jacobean drink cupboard to which they hold the key. Oddly, throughout the entire performance — though he is eventually driven to tackle the cupboard floor with a brace and bit Denis is never seen to take a drink. Perhaps John Wells is averse to the stuff. No, it is Joan Sanderson, top Wren, wearing an Admiral's uniform like a pinafore, who dishes Denis. She conveys to a tee what Chequers is like for a Prime Minister's lonely husband with no more than a natural thirst; indeed for anyone a fraction outside the magic circle which Lord Lee of Fareham had in mind. A good evening for her.

A good evening for Denis? The portrait of him as a buffoon is absurd, which Private Eye's is not. Carol Thatcher — and she should know — is entitled to observe in the News of the World that the play 'removes all the affection for Dad and replaces it with ridicule.' Somewhere along the line, John Wells has lost, or mislaid, the amiability. That conceded, I think that all in all this is not too bad an evening for the couple who actually inhabit No 10.

In Paris a play like this would go down like a lead balloon. In Spain there would be riots, in Italy shooting. In Germany it would have to play as the late late show in a risque nightclub. In America, what with the President and the flag and so on, even the Washington Post would complain. On this corner of Whitehall, blessedly devoid of any serious political message whatsoever, Anyone for Denis? seems a natural present to ourselves, and pretty well all the many laughs are happy. Yes, Denis, it is a far far better thing that you do . . .

But now, if I may have an entirely private word with John Wells and his producer, Dick Clement, about Act I — and this is strictly unattributable, deep background only — Denis plays golf left-handed.

W. F. Deedes is editor of the Daily Telegraph.