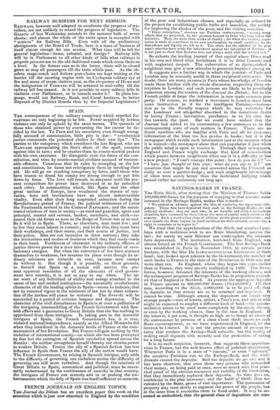 RAILWAY BUSINESS FOR NEXT SESSION.

RAILWAYS, however well adapted to accelerate the progress of tra- vellers, are not unlikely to retard the progress of legislation. The Gazette of last Wednesday extends to the monster bulk of seven sheets ; and almost the whole of the extra space is occupied with "notices" for Railway Bills. Even with all the preliminary abridgments of the Board of Trade, here is a mass of business of itself almost enough for one session. What time will be left for general legislation—home, colonial, and foreign ? Railway bills will be in Parliament to all other kinds of bills what railways in propriis personis are to the old-fashioned roads which cross them on a level. In the former case as in the latter, there will be closed gates to stop all passengers till the train whirls past. As the ob- solete stage-coach and forlorn post-chaise are kept waiting at the barrier till the snorting engine with its Cyclopean solitary eye of fire and mane of steam clatters past, so the eloquence of HUME and the indignation of FERRAND will be arrested in mid-volley till the railway bill has passed. Is it not possible to carry railway bills in viaducts over Parliament, or in tunnels under it ? In plain lan- guage, would not Railway, Road, and Canal business, be better disposed of by District Boards than by the Imperial Legislature ?