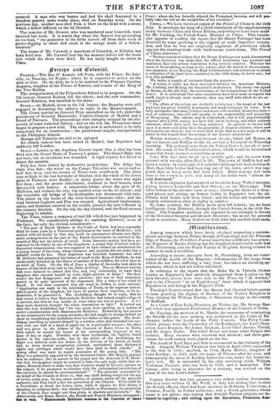 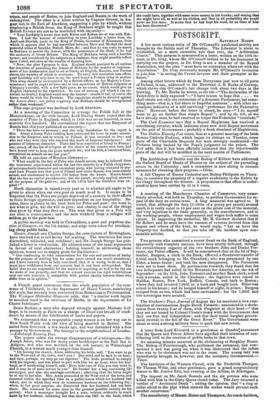 Among rumours which have lately obtained respecting a contem- plated marriage between Prince George of Cambridge and the Princess Olga of Russia, the Frankfort Journal asserts that a difficulty has arisen; the Emperor of Russia wishing that his daughter should reside with him at St. Petersburg, and the Royal Family of England haviug refused to consent to such a condition.

According to recent accounts from St. Petersburg, fears are enter- tained of the health of the Empress : inflammation of the lungs, from which she has been suffering a long time, has taken an alarming ap- pearance, which it had not before exhibited.

In reference to the report that the Duke De la Victoria (better known as Espartero) had suddenly disappeared from Landon on the 26th October, letters have been sent to the Times by " M. Abitbal," and to the Chronicle by an Englishman," from which it appears that Espartero is still living in the Regent's Park.

Tuesday's Gazette stated that the Queen had directed letters-patent to issue granting the dignity of Baronet of the United Kingdom to Vice- Admiral Sir William Parker, of Shenstoue Lodge in the county of Stafford.

At a Court of East India Directors, on Wednesday, Mr. George Rus- sell Clerk was appointed Provisional Member of the Council of India.

On Tuesday, the morrow of St. Martin, the ceremony of nominating the Sheriffs for the year ensuing was performed in the Court of Ex chequer, before the Lords of the Privy Council. The Privy Coun- cillors present were the Chancellor of the Exchequer, the Lord Chan- cellor, Lord Denman, Sir James Graham, Lord Chief Justice Tindal, and Sir James Parke. The Chief Baron and some other Judges also assisted. Many excuses were received and allowed; and three gen- tlemen for each county were placed on the list.

The death of Lord Saye and Sele is announced in the obituary of the week. Gregory William Twisleton was born in April 1769; succeeded to the title in 1788; married, in 1794, Maria Marion, daughter of Lord Eardley ; in 1825, took the name of Fiennes after his own, and subsequently the name of Eardley before his own, under his father-in- law's will. He is succeeded by his only surviving child, William Twisleton Fiennes ; who was born in 1798, and is unmarried. The barony, after being in abeyance for a century, was revived on the claim of the late Lord's fathera Captain Grover has just published two rather curious document& One is a letter written by Dr. Wolff, in July last, stating that, besides the British officers, there had been executed in Bukhara, Todderwise, a German, Naselli, an Italian nobleman, and a Greek gentleman whose name is not given ; also stating that 200,000 Persian subjects are de- tained in captivity ; and calling upon the Bavarians, Prussians, Atm-

trians, and people of Baden, to join England and Russia in the work of redemption. The other is a letter written by Captain Grover, in Au- gust last, to the Earl of Aberdeen, suggesting a plan by which, without employing a British force, the King of Bokhara might be taught that British Envoys are not to be murdered with impunity-

" Your Lordship is aware that both Khiva and Kokan are at war with Bok- /bara. I had the honour of submitting to your Lordship a letter from the .Assof-ood-Dowlab, uncle to the King of Persia, Governor of Khorassan, from which it appears that he had assembled between Mery and Meshed the most powerful tribes of Sarakhs, Mahall, Merv, &c. and that he was ready to march to Bokhara to punish the Ameer, with the permission of the Shah, if be had the authority of Great Britain. The King of Bokhara being such a horrible tyrant, and considered by his subjects as a madman, they might possibly reflect won Cabal, and save us the trouble of deposing him. "Now, the plan I propose is this. England should proclaim to all nations her intention of punishing the Ameer of Bukhara for the murder or imprison- ment of her Ambassador. and to set at liberty all English, Russian, and Persian slaves, the number of which is enormous. To carry this resolution into effect, your Lordship will only have to say the word to put a Persian army in motion. This army should be accompanied by a British officer, as her Majesty's Com- missioner; and he ought to have one or two squadrons of British dragoons or Company's cavalry, with a few light guns, as an escort, which would give an English character to the expedition. In ease of success, (of which I can en- tertain no doubt,) England would reap the honour : should it fail, of course the blame would lie with the Persians. The expedition should be directed against the Ameer alone ; our policy requiring that Bokhara should be strengthened rather than weakened."

This sage proposal was declined by Lord Aberdeen.

At a meeting of the Committee to arrange the Polish ball at the Mansionhouse, on the 19th instant, Lord Dudley Stuart stated that the number of Poles in England, which in 1838 was seven hundred, is now scarcely five hundred. He contradicted the report that the Emperor of Russia had this year published an amnesty- " There has been no amnesty ; and the only foundation for the report is this. About a dozen Poles residing here petitioned for leave to make submis- sion to the Emperor, and to return to Poland. It was accorded to five ; and who and what were they who received this mark of Imperial indulgence ? All persona of infamous character. Three had been convicted of felony in France; one, struck off the liet of refugees at the desire of his country men here, had been bound over to keep the peace towards me; and the fiftht a convicted felon, committed an assault on me last year."

Be told an anecdote of Russian clemency-

." What would be the fate of Poles who should return, may be inferred from the treatment experienced within the last two months by a Polish clergyman, of unimpeachable character and exemplary piety, who having ventured to pro- ceed from Prussia into that part of Poland now under Russia, was immediately seised, and condemned to receive 150 lashes from the knout. Russia boasts that she has no capital punishments; but the knout, severely applied, answers all the purpose of the gallows; and at the 147th blow the wretched man ex- pired Much discussion is raised every year as to whether aid ought to be given to aliens when our own poor so much need it. It seems to be forgotten that the Poles are people deprived of a country in their efforts to resist foreign oppression, and now dependent on our hospitality. Be- sides, there is plenty in the land both for Poles and poor : the want is, not what to give, but the will to give ; and charity is one of the things that grow by what they feed on. The man that gives to a Pole will not stint a countryman ; and the mite withheld from a refugee will seldom go to the poor-box.

A public meeting was held in Cowcaddens, a poor and populous dis- trict of Glasgow, on the 7th instant, and steps were taken for establish- ing cheap public baths.

Messrs. Joseph and Charles Sturge, the corn-factors of Birmingham, have resolved not to sell barley for malting. The resolution has been discredited, ridiculed, and combated; and Mr. Joseph Sturge has pub- lished a letter in vindication. He adduced some of the usual arguments in favour of total abstinence; holding himself, as advocating those opinions, bound not to supply grain for distilleries- " Our continuing to take commissions for the sale and purchase of barley for the purpose of malting has for some years caused me much uneasiness; and I have recently been so fully convinced that it is wrong to do so, that I must have withdrawn from our concern had it not been relinquished. The belief that we are responsible for the means of acquiring, as well as for the use we make of our property, and that we cannot exercise too rigid watchfulness over our own conduct, is compatible with perfect charity towards those who differ from us in opinion."

A French paper announces that the whole population of the com- mune of Villefavard, in the department of Haute Vienne, numbering 600 souls, has recently been converted from Romanism to Protestantism. The Wesleyan Methodist Magazine adds, that " a similar work begins to manifest itself in the environs of Maths, in the department of La Charte Inferieure."

Denis Barbier, a man who deposed strongly against Madame Laf- farge, is in custody at Paris on a charge of fraud and breach of confi- dence by means of the falsification of books and papers.

We understand that a respectable young woman is on her way out to New South Wales with the view of being married to Barber. She sailed from Greenock a few weeks ago, and was furnished with a free passage by Government. She belongs to the neighbourhood of London. —Edinburgh Evening Post. The papers relate the strange disappearance of a bridegroom—Mr. Joseph Ames, who was for many years bookkeeper at the Bull Inn in Aldgate, and who was married on the 6th instant, at Whitechapel Church, to a woman much younger than himself.

"On leaving the church, Ames, addressing his bride, said, Yon want to go to the West-end of the town, don't you ? But mind and be back in an hour; -and then, perhaps, we may go out together.' The bride promised to comply with his request ; and was about to part with him for an hour, when her hus- band, as if recollecting himself, said, Here, take care of this, you may want it, and it may be of some service to you.' He handed her a bag, containing 120 sovereigns, and also the marriage-certificate ; observing that the latter might be of use to her also. Mrs. Ames proceeded to the West-end of the town, and returned within the specified time to a public-house which her husband had taken, and in which they were to commence business on the following day ; when, to her great surprise, she discovered that her husband had not been there. She remained for some time in the greatest possible anxiety for his arrival; when a messenger brought her a note, written evidently in much baste by her husband, informing her that there was 1304 in. the bank, which she could have, together with some more money in his trunks ; and stating that she might have all, as well as his clothes, and that in all probability she would never see him more. It seems that he has kept his word, for no trace of him- has been discovered."