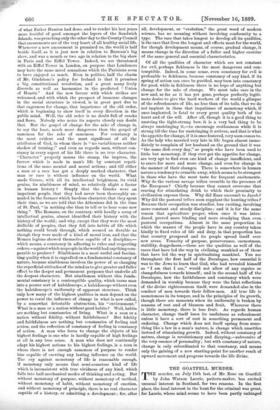 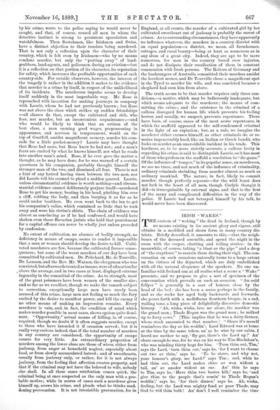 MHE murder, on July 15th last, of Mr. Rose on Goatiell by John Watson Laurie, pattern-maker, has excited unusual interest in Scotland, for two reasons. In the 'first place, the local interest in the hunt for the criminal was great, for Laurie, whose mind seems to have been partly unhinged by his crime, wrote to the police saying he would never be caught, and that, of course, roused all men in whom the detective instinct is strong to persistent speculation and watchfulness. Then Scotchmen, like Irishmen and Swiss, have a distinct objection to their tourists being murdered. That is not only a reflection upon the character of their country, which is felt even by Irishmen—who by no means condone murder, but only the "putting away" of land- grabbers, land-agents, and policemen during an eviction—but it is a reflection on that portion of its character, its reputation for safety, which increases the profitable opportunities of each country-side. For outside observers, however, the interest of the tragedy is rather in the addition it makes to the evidence that murder is a crime by itself, in respect of the unlikelihood of its incidents. The murderous impulse seems to develop itself suddenly in the most improbable way. Mr. Rose is reproached with incaution for making journeys in company with Laurie, whom he had not previously known ; but Rose was not above the class which strikes up sudden friendships —all classes do that, except the cultivated and rich, who fear, not murder, but an inconvenient acquaintance ;—and who would be likely to think that an artisan of the best class, a man earning good wages, prepossessing in appearance, and nervous in temperament, would on the top of Goatfell, amidst magnificent scenery, murder his com- rade for a little poeket-money ? Laurie may have thought that Rose had more, but Rose knew he had not; and a man's fears are excited by what he knows himself, not what he reads into another man's mind. Rose, if he ever gave the matter a thought, as he may have done, for he was warned of a certain queerness in his companion, probably thought himself the stronger man of the two, and dismissed all fear. There is not a hint of any hatred having risen between the two men, nor did Laurie tell his counsel to plead a sudden quarrel. Laurie, unless circumstantial evidence is worth nothing—and circum- stantial evidence cannot deliberately perjure itself—murdered Rose to get his money, beating in his head, pitching him over a cliff, robbing the body, and then burying it as far as he could under boulders. He even went back to the inn to get his companion's valise, which contained so little that he took away and wore his victim's shirts. The chain of evidence was almost as convincing as if he had confessed, and would have shaken even those Bavarian jurists who hold that punishment for a capital offence can never be wholly just unless preceded by confession.

No extent of cultivation, no absence of bodily strength, no deficiency in means of escape, seems to render it impossible that a man or woman should develop the desire to kill. Culti- vated murderers are few, because the cultivated foresee conse- quences; but some of the worst murders of our day have been committed by cultivated men. Dr. Pritchard, Mr. de Tourville, Dr. Lamson, and the Rev. Mr. Watson, the clergyman who was convicted, but afterwards treated as insane, were of education far , above the average, and in two cases at least, displayed extreme ingenuity in the committal of the crime. As to strength, most of the great poisoners have been women of the smaller size; and so far as we recollect, though we make the remark subject to correction, exceptionally large men have rarely been accused of this crime, large men not feeling so much the fury excited by the desire to manifest power, and kill the enemy if no other means of making an impression remains. Every murderer is vain, and, in fact, the condition of mind which makes murder possible in most cases, shows egoism quite domi- nant. "Opportunity," actual means of killing, is, of course, required, though we doubt if it often suggests murder, except to those who have intended it if occasion served ; but it is really very curious indeed, that if the total number of murders in any country are considered, the opportunity of escape counts for very little. An extraordinary proportion of murders among the lower class are those of wives, either from jealousy, from anger at household neglect, especially about food, or from slowly accumulated hatred ; and of sweethearts, usually from jealousy only, or rather, for it is not always jealousy, from the feeling that affection creates property, and that if the criminal may not have the beloved to wife, nobody else shall. In all these cases retribution comes quick, the criminal being at once suspected 88 the only man with a pro- bable motive; while in scores of cases such a murderer gives himself up, avows his crime, and pleads what he thinks mad- dening provocation. It is not irresistible provocation, for in

England, at all events, the murder of a cultivated girl by her cultivated sweetheart out of jealousy is probably the rarest of crimes. As to surrounding circumstances, they have apparently no influence whatever, the murders in a country district with an equal population—a district, we mean, all farmhouses, cottages, and rural beauty—being at least as numerous as in any slum of a great city. Indeed, they are apt to be more numerous, for men in the country brood over injuries, and do not dissipate their recollection of them in constant communion with fresh persons. The Reliefs of Germany and the bushrangers of Australia committed their murders amidst the loveliest scenes, and De Totwville chose a magnificent spot in the Tyrol to murder his wife, and was convicted because a shepherd had seen him from above.

The truth seems to be that murder requires only three con- ditions,—a motive, which may be ludicrously inadequate, but which seems adequate to the murderer; the means of com- mitting the crime ; and the existence in the criminal of a callous disregard for human life which prevents his feeling horror, and usually, we suspect, prevents repentance. There have been, of course, cases of the most acute repentance, in which the scaffold appeared to the self-condemned criminal in the light of an expiation ; but, as a rule, we imagine the murderer either excuses himself, as other criminals do, or re- mains impenetrably hard, like an Italian or Greek bandit, who looks on murder as an unavoidable incident in his trade. This hardness, or, to be more strictly accurate, a callous levity in regarding his crime, is said to distinguish Laurie, as it has most of those who profess on the scaffold a resolution to "die game." Of the influence of "temper," in its popular sense, on murderers, we see no trace, and not much of the influence of criminality, ordinary criminals shrinking from murder almost as much as ordinary mankind. The nature, in fact, likely to commit murder, though perfectly separate—for the wild beast does not lurk in the heart of all men, though Carlyle thought it did—is irrecognisable by external signs, and that is the first of the many and complicated difficulties in the way of the police. If Laurie had not betrayed himself by his talk, he would never have been discovered.