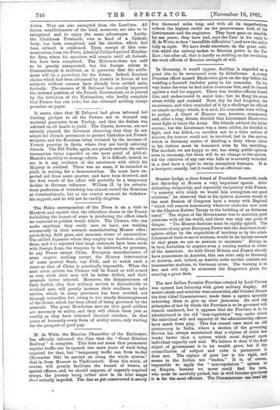 In Germany, it would appear, duelling is regarded at a

great rite, to be reverenced even by disbelievers: A young Prussian officer named Blaskowitz gave on the day before his wedding a farewell bachelor party to his comrades. On his way home the wine he had taken overcame him, and he leaned against a wall for support. There two brother-officers found him, and endeavoured to assist him; but he flung his arms about wildly and resisted. Next day he had forgotten the occurrence, and when reminded of it by a challenge he offered an ample apology, which, it is said, his comrades were willing to accept. A Court of Honour was, however, summoned, and, after a long debate, decided that Lieutenant Blaskowitz must fight or leave the Army. His friends advised the latter course ; . but the Lieutenant was a keen soldier, he decided to fight, and was killed,--a sacrifice not to a false notion of honour, for honour could not be involved, but to the system which in Germany makes of duelling a deity whose claim to his victims must be honoured even by the unwilling. The incident, we are happy to see, has stung public opinion even in tiermany, but there will be no change in the system till the relatives of any one who falls or is severely wounded in a duel have a right to claim exemplary damages. It is a bourgeois remedy, but it would be an effectual one.