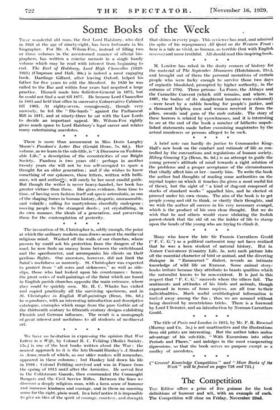 Many who knew the late Sir Francis Carruthers Gould ("

F. C. G.") as a political cartoonist may not have realized that he was a keen student of natural history. But in Nature Caricatures (Country Life, 5s. net) each picture hits off the essential character of bird or animal, and the diverting dialogue in " Zummerzet " dialect, reveals an intimate knowledge of wild life on Exmoor. Some animal story- books irritate because they attribute to beasts qualities which the naturalist knows to be non-existent. It is just in this respect that " F. C. G." succeeds where the others fail. The sentiments and attitudes of his birds and animals, though expressed in terms of homo sapiens, are all true to their individualities. Much useful ornithological information is tucked away among the fun ; thus we are amused without being deceived by meretricious tricks. There is a foreword by Lord Ullswater, and an introduction by Norman Carruthers Gould. *. * * *