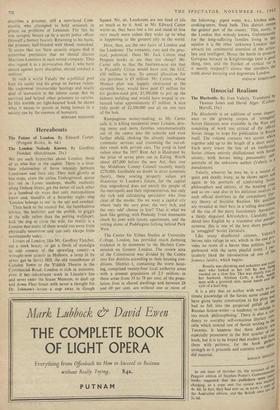 The Future of London. By Edward Carter. (Penguin Books, 4s. 6d.) The London Nobody Knows. By Geoffrey Fletcher. (Hutchinson, 21s.) WE are such hypocrites about London, those of us who live in the capital. There is a love- hate relationship of fierce intensity between Londoners and their city. They wait glumly at bus stops, cram the airless Underground, queue for tea in Lyons teashops, shuffle endlessly along Oxford Street, get the better of each other in a hundred sly ways that only metropolitans know and, maudlin of a Saturday night, sing 'London belongs to me' in the spit and sawdust.

Then back to the council flat, the tumbledown terrace, the bedsitter and the prefab, to goggle at the telly rather than the peeling wallpaper, kick the dog or curse the wife, for reality is a London that many of them would run away from physically tomorrow- and can only escape from momentarily today.

Lovers of London, like Mr. Geoffrey Fletcher, see a stark beauty or get a throb of nostalgia in odd corners of the sprawling county—a wrought-iron urinoir in Holborn, a- lamp lit by sewer gas in Savoy Hill, the old roundhouse at Camden Town' or the Yiddish Theatre in the Commercial. Road. London is rich in treasures, even if her.-'inhabitants work in Lincoln's Inn and never enter the Soane Museum, or dash up and down fleet Street with never a thought for Dr. Johnson's house a step away in Gough

Square. No, sir, Londoners are not tired of life so much as by it. And, as Mr. Edward Carter warns us, they have lost a lot and stand to lose very much more unless they wake up to what is happening to the greatest city in the world.

Here, then, are the two faces of London and the Londoner. The romantic, rosy and the prac- tical, polemical. Does Mr. Jack Cotton read Penguin books or are they too cheap? Mr. Carter tells us that the fourteen-acre site that is Piccadilly Circus would have cost the LCC £50 million to buy. Its annual allocation for site purchase is £9 million. Mr. Cotton, whose Monico plan was happily obstructed at the eleventh hour, would have paid £3 million for his garden-sized plot, £1,500,000 to put up the hideous building and would have reaped in en- hanced value approximately £7 million. A nice little profit of £2,500,000 and all on one turn of the hub.

Rampageous money-making, as Mr. Carter calls it, is killing residential inner London, driv- ing more and more families unsystematically out of the centre into the suburbs and even farther afield, choking the already inadequate commuter services and cramming the out-of- date roads with private cars. The jump in land values since the 1957 Rent Act is illustrated by the price of seven plots out in Ealing. Worth about £87,000 before the new Act, they cost the Middlesex County Council recently nearly £270,000. Justifiable no doubt in strict economic theory, these soaring property values are disastrous to London's future, for the capital thus engendered does not enrich the people of the metropolis and their representatives, but only the rich and calculating speculator who lives clear of the smoke. Do we want a capital city where 'only the very poor, the very rich, and the very odd' choose to live? That is what we look like getting, with Peabody Trust tenements cheek by jowl with luxury apartments, and the rotting slums of Paddington lurking behind Park West.

The Centre for Urban Studies at University College, London, has provided much damning evidence in its statement to the Herbert Com- mission on Greater London. The review area of the Commission was divided by the Centre into five districts according to their housing con- ditions. 'District 1, containing the worst hous- ing, comprised twenty-four local authority areas with a present population of 2.5 million; in these areas from 33 to 78 per cent, of the popu- lation lives in shared dwellings and between 28 and 69 per cent. are without one or more of

the following: piped water, w.c., kitchen shill' cooking-stove, fixed bath. This district covers. the greater part of the county.' This, surely, Is the London that nobody knows. Unfortunately for the long-suffering families living in this squalor it is the other 'unknown London'

attracts the .;entimental attention of the articu- late and intelligent. Hence the battle to preserve Georgian terraces in Knightsbridge (and a goo,' thing, too), and the blanket of cynical (or ts it merely resigned?) silence that smothers the truth about decaying and degenerate London. ANDREW ROBERTSON