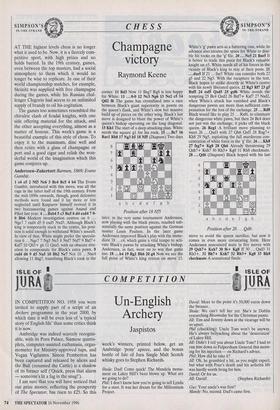 AT THE highest levels chess is no longer what it used to be. Now, it is a fiercely com- petitive sport, with high prizes and no holds barred. In the 19th century, games, even between the top masters, had a social atmosphere to them which it would no longer be wise to replicate. In one of their world championship matches, for example, Steinitz was supplied with free champagne during the games, while his Russian chal- lenger Chigorin had access to an unlimited supply of brandy to oil his cogitation.

The games too sometimes resembled the chivalric clash of feudal knights, with one side offering material for the attack, and the other accepting everything, almost as a matter of honour. This week's game is a beautiful example of this style of chess. To enjoy it to the maximum, dine well and then, retire with a glass of champagne or port and a good cigar and relish the won- derful world of the imagination which this game conjures up.

1 e4 e5 2 Nf3 Nc6 3 Bc4 Bc5 4 b4 The Evans Gambit, introduced with this move, was all the rage in the latter half of the 19th century. From the mid-1890s onwards, though, good defensive methods were found and it lay more or less neglected until Kasparov himself revived it in two buccaneering games against Arland and Piket last year. 4 ...Bxh4 5 c3 Ba5 6 d4 exd4 7 0- 0