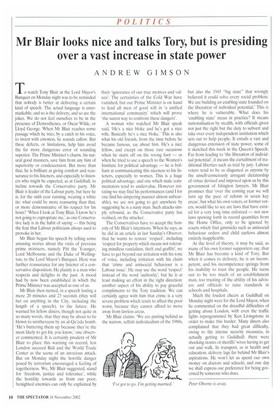 Page 10, 16 November 2002 — Mr Blair looks nice and talks Tory, but is presiding over a vast increase in state power
Close

Mr Blair looks nice and talks Tory, but is presiding over a vast increase in state power

To watch Tony Blair at the Lord Mayor's Banquet on Monday night was to be reminded that nobody is better at delivering a certain kind of speech. The actual language is unremarkable. and so is the delivery, and so are the jokes. We do not feel ourselves to be in the presence of Demosthenes, or Oscar Wilde, or Lloyd George. When Mr Blair reaches some passage which he tries, by a catch in his voice, to invest with emotion, he sounds callow. But these defects, or limitations, help him avoid the far more dangerous error of sounding superior. The Prime Minister's charm, his natural good manners, save him from any hint of superiority or condescension. But more than that, he is brilliant at giving comfort and reassurance to his listeners, and especially to listeners who might be expected, as at Guildhall, to incline towards the Conservative party. Mr Blair is leader of the Labour party, but here he is, for the sixth year running, wearing a white tie: what could be more reassuring than that, or more demonstrative of his respect for his hosts? 'When I look at Tony Blair. I know he's not going to expropriate me,' as one Conservative lady is in the habit of saying — this being the fear that Labour politicians always used to provoke in her.

Mr Blair began his speech by telling some amusing stories about the visits of previous prime ministers, namely Pitt the Younger, Lord Melbourne and the Duke of Wellington, to the Lord Mayor's Banquet, Here was further reassurance for any listener of a conservative disposition. He plainly is a man who respects and delights in the past. A mood had by now been established in which the Prime Minister was accepted as one of us.

Mr Blair then turned, in a speech lasting a mere 20 minutes and 23 seconds (they will bet on anything in the City, including the length of a speech), to the future. He warned his fellow diners, though not quite in so many words, that they may be about to be blown to smithereens by an al-Qa'eda bomb. 'He's buttering them up because they're the most likely to get hit, you know,' one observer commented. It is certainly prudent of Mr Blair to place this warning on record, lest London succeed Bali and the World Trade Center as the scene of an atrocious attack. But on Monday night the horrific danger posed by terrorism encouraged a feeling of togetherness. We, Mr Blair suggested, stand for 'freedom, justice and tolerance', while the hostility towards us from our poor, benighted enemies can only be explained by their 'ignorance of our true motives and values'. The certainties of the Cold War have vanished, but our Prime Minister is on hand to lead all men of good will in 'a unified international community' which will prove 'the surest way to confront these dangers'.

A woman who watched Mr Blair speak said, 'He's a nice bloke and he's got a nice wife. Basically he's a nice bloke.' This is also what his old friends, from the time before he became famous, say about him. He's a nice fellow, and except on those rare occasions when he starts off on the wrong foot — as when he tried to use a speech to the Women's Institute for political advantage — he is brilliant at communicating this niceness to his listeners, especially to women. This is a huge political advantage, and one which male commentators tend to undervalue. However irritating we may find his performances (and I for one find his simpering manner almost unbearable), we are not going to get anywhere by suggesting he is a nasty man. Such attacks simply rebound, as the Conservative party has realised, on the attacker.

The Conservatives have to accept the honesty of Mr Blair's intentions. When he says, as he did in an article in last Sunday's Observer, that he wants to restore 'respect', including 'respect for property which means not tolerating mindless vandalism, theft and graffiti', we have to get beyond our irritation with his tone of voice, including irritation with his claim that 'crime and antisocial behaviour is a Labour issue'. He may use the word 'respect' instead of the word 'authority', but he is at least making an effort in the right direction: another aspect of his ability to pay graceful compliments to the Tory tradition. We can certainly agree with him that crime is a very severe problem which tends to affect the poor worst, because they cannot afford to move away from lawless areas.

Mr Blair claims: 'We are putting behind us the narrow. selfish individualism of the 1980s, but also the 1945 "big state" that wrongly believed it could solve every social problem. We are building an enabling state founded on the liberation of individual potential.' This is where he is vulnerable. What does his 'enabling state' mean in practice? It means nationalisation by stealth, with officials given not just the right but the duty to subvert and take over every independent institution which sets out to help people. It entails a vast and dangerous extension of state power, some of it sketched this week in the Queen's Speech. Far from leading to 'the liberation of individual potential', it means the curtailment of traditional liberties such as trial by jury. Labour voters tend to be as disgusted as anyone by the unself-consciously arrogant dictatorship of virtue devised and imposed upon us by this government of Islington lawyers. Mr Blair promises that 'over the coming year we will turn up the pace of reform in seven key areas', but what his own voters, or former voters, would like to see are laws that have existed for a very long time enforced — not new laws spewing forth in record quantities from the Home Office, only to be ignored by courts which find gimmicks such as antisocial behaviour orders and child curfews almost entirely inapplicable.

At the level of theory, it may be said, as many of his own former supporters say, that Mr Blair has become a kind of Tory. But when it comes to delivery, he is an incompetent, and his incompetence springs from his inability to trust the people. He turns out to be too much of an establishment man, too trusting of the ability of his advisers and officials to raise standards in schools and hospitals.

Much the loudest cheers at Guildhall on Monday night were for the Lord Mayor, when he commented on the dreadful difficulties of getting about London, with even the traffic lights reprogrammed by Ken Livingstone in order to make this harder. Many diners also complained that they had great difficulty, owing to the intense security measures, in actually getting to Guildhall: there were shocking stories of sheriffs' wives having to get out and walk. In transport, as in health and education, delivery lags far behind Mr Blair's aspirations. He won't let us spend our own money on doctors and schools; and one day we shall express our preference for being governed by someone who does.