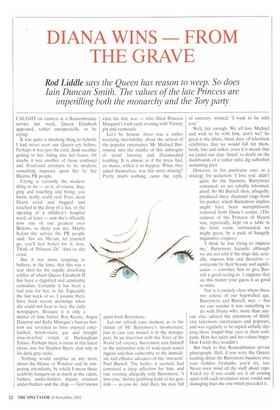 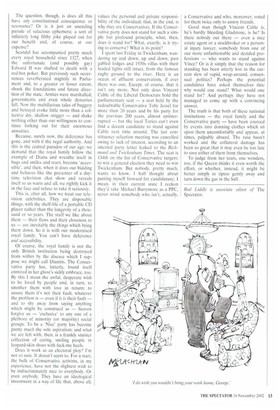 DIANA WINS FROM THE GRAVE

Rod Liddle says the Queen has reason to weep. So does

lain Duncan Smith. The values of the late Princess are imperilling both the monarchy and the Tory party

CAUGHT on camera at a Remembrance service last week, Queen Elizabeth appeared, rather unexpectedly, to be crying.

It was quite a shocking thing to behold: I had never seen our Queen cry before. Perhaps it was just the cold, dank weather getting to her, biting into her bones. Or maybe it was another of those confused and ill-advised attempts to be modern, something imposed upon her by her Blairite PR people.

Crying is certainly the modern thing to do — as is, of course, hugging and touching and being, you know, really, really real. Poor, dead Diana cried and hugged and touched at the drop of a hat, or the opening of a children's hospital ward, at least — and she's officially now one of our greatest ever Britons, so there you are. Maybe before the service the PR people said, 'Go on, Ma'am, let yourself go; you'll feel better for it, love. Think of Princess Di.' And so she cried.

But it was more tempting to believe, at the time, that this was a tear shed for the rapidly dissolving edifice of which Queen Elizabeth II has been a dignified and admirable custodian. Certainly it has been a bad year for her, so far. Especially the last week or so. I assume there have been recent mornings when she could not bear to face the daily newspapers. Because it is only a matter of time before Roy Keane, Angus Deayton and Kylie Minogue's famous bottom are revealed to have enjoyed cokefuelled, below-stairs, gay and straight nine-in-a-bed romps at Buckingham Palace, Perhaps there is room in this latest circus, too, for Stephen Byers, clad only in his dark grey socks.

Nothing would surprise us any more about the House of Windsor and its simpering attendants, by which I mean those celebrity bangers-on as much as the valets, butlers, under-butlers, deputy assistant under-butlers and the chap — God knows what his title was — who filled Princess Margaret's bath each evening with Victory gin and vermouth.

Let's be honest: there was a rather wearying inevitability about the arrival of the popular entertainer Mr Michael Barrymore into the middle of this imbroglio of serial fawning and ill-concealed loathing. It is almost as if the press had, en masse, willed it to happen. What, they asked themselves, was this story missing? Pretty much nothing, came the reply, apart from Barrymore.

Let me refresh your memory as to the nature of Mr Barrymore's involvement, just in case you missed it in the newspapers. In an interview with the News of the World (of course), Barrymore cast himself in the unfamiliar role of wide-eyed sexual inge-nu and thus vulnerable to the immediate and effusive advances of the 'innocent' Paul Burrell. The butler, it seemed, had contrived a deep affection for him, and one evening allegedly told Barrymore, 'I love you,' before grabbing hold of his genitals — as you do. And then, his eyes full

of entreaty, whined, 'I want to be with you: Well, fair enough. We all love Michael and wish to be with him, don't we? So great is the allure, these days, of television celebrities that we would fall for them, hook, line and sinker, even if it meant that we ended our days 'fisted' to death on the duckboards of a rather infra dig suburban swimming pool.

However, in this particular case, as a strategy for seduction 'I love you' didn't quite do the business. Barrymore remained, we are reliably informed, aloof. So Mr Burrell then, allegedly, produced three diamond rings from his pocket, which Barrymore implies might have been surreptitiously removed from Diana's corpse. (The cadaver of the Princess of Hearts was, reportedly, kept on a table in the front room, surrounded, we might guess, by a pack of hungrily inquisitive corgies.)

'I think he was trying to impress me,' Barrymore hazards, although we are not told if the rings did, actually, impress him and therefore — overcome by their beauty and significance — convince him to give Burrell a good seeing-to. I suppose that on this matter your guess is as good as mine.

Nor is it entirely clear where these two colossi of our bejewelled age, Barrymore and Burrell, met — but we can assume it was something to do with Diana who, more than anyone else, adored the attentions of thirdrate television entertainers and popstars, and was regularly to be espied artfully dipping those limpid blue eyes in their company. How her spirit and her values linger. How I wish they wouldn't.

But back to that Remembrance service photograph. Hell, if you were the Queen, reading about the Barrymore business over your Golden Grahams, you'd cry, too. Never even mind all the stuff about rape. You'd cry if you could see it all coming apart with each revelation more sordid and damaging than the one which preceded it. The question, though, is does all this have any constitutional consequence or resonance? Or is it just an unending parade of salacious ephemera; a sort of infinitely long filthy joke played out for our benefit and, of course, at our expense?

Scandal has accompanied pretty much every royal household since 1327, when the unfortunate (and possibly gay) Edward II was shafted to death with a red-hot poker. But previously such occurrences reverberated mightily in Parliament and, to a greater or lesser extent, shook the foundations and future direction of the state. Armies were marshalled; governments and even whole dynasties fell. Now the multifarious tales of buggery and betrayal evoke little more than a collective dry. shallow snigger — and shake nothing other than our willingness to continue forking out for their enormous annuities.

Because, surely now, the deference has gone, and with it the regal authority. And this is the central paradox of our age: we demand that the royal family follow the example of Diana and wreathe itself in hugs and smiles and tears, become 'accessible', and then, when it does our bidding and behaves like the presenter of a daytime television chat show and reveals itself to us warts and all, we rightly kick it in the face and refuse to take it seriously.

This is, after all, how we treat our television celebrities. They are disposable things, with the shelf-life of a portable CD player rather than the longevity of a thousand or so years. The stuff we like about them — their flaws and their closeness to us — are inevitably the things which bring them down. So it is with our modernised royal family. You can't have deference and accessibility.

Of course, the royal family is not the only British institution being destroyed from within by the disease which I suppose we might call Dianitis. The Conservative party has, latterly, found itself enmired in her ghost's sickly embrace, too. By this I mean the awful, desperate wish to be loved by people and, in turn, to smother them with love in return; to assure them it's not their fault, whatever the problem is — even if it is their fault — and to shy away from saying anything which might be construed as — heaven forgive us — 'exclusive' to any one of a plethora of minority (or majority) social groups. To be a 'Nice' party has become pretty much the sole aspiration; and what we are left with, then, is a frankly sinister collection of caring, smiling people in leopard-skin shoes with fuck-me heels.

Does it work as an electoral ploy? I'm not so sure. It doesn't seem to. For a start, the bulk of Conservative activists, in my experience, have not the slightest wish to be indiscriminately nice to everybody. Or even anybody. They have an ideological investment in a way of life that, above all, values the personal and private responsibility of the individual; that, in the end, is why they are Conservatives. If the Conservative party does not stand for such a simple but profound principle, what, then, does it stand for? What, exactly, is it trying to conserve? What is its point?

I spent last Friday in Twickenham, wandering up and down, up and down, past gabled lodges and 1930s villas with their leaded lights still intact, from the famous rugby ground to the river. Here is an ocean of affluent conservatism, if ever there was one. Except, of course, that it isn't any more. Not only does Vincent Cable of the Liberal Democrats hold the parliamentary seat — a seat held by the redoubtable Conservative Toby Jesse' for more than 20 years and by his party for the previous 200 years, almost uninterrupted — but the local Tories can't even find a decent candidate to stand against Cable next time around. The last constituency selection meeting was cancelled Owing to lack of interest, according to an internal party letter leaked to the Richmond and Twickenham Times. The seat is 134th on the list of Conservative targets; to win a general election they need to win Twickenham. But nobody, pretty much, wants to know. I half thought about putting myself forward for candidature; I mean, in their current state I reckon they'd take Michael Barrymore as a PPC, never mind somebody who isn't, actually,

a Conservative and who, moreover, voted for them twice only to annoy friends.

Good man though Vincent Cable is, he's hardly bleeding Gladstone, is he? Is there nobody out there — even a nice estate agent or a stockbroker or a personal injury lawyer, somebody from one of our more unfashionable and derided professions — who wants to stand against Vince? Or is it simply that the reason for standing has been utterly lost in the current slew of vapid, wrap-around. consensual politics? Perhaps the potential candidates have asked themselves this: why would one stand? What would one stand for? And perhaps they have not managed to come up with a convincing answer.

The truth is that both of these national institutions — the royal family and the Conservative party — have been coerced by events into donning clothes which sit upon them uncomfortably and appear, at times, palpably absurd. The ruse hasn't worked and the collateral damage has been so great that it may even be too late to save either of them from themselves.

To judge from her tears, one wonders, too, if the Queen thinks it even worth the effort, or whether, instead, it might be better simply to tiptoe gently away and turn down the gas in the hall.