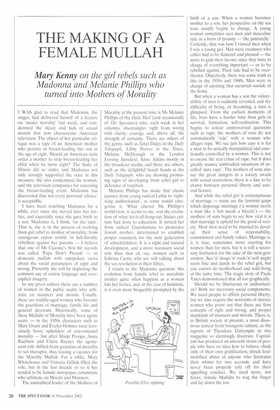 THE MAKING OF A FEMALE MULLAH

Mary Kenny on the girl rebels such as

Madonna and Melanie Phillips who turned into Mothers of Morality

I WAS glad to read that Madonna, the singer, had delivered herself of a lecture on 'media morality' last week, and condemned the sleaze and lack of sexual morals that now characterise American television. The object of her particular critique was a tape of an American mother who persists in breast-feeding her son at the age of eight. Should an American state order a mother to stop breast-feeding her child when he turns eight? The State of Illinois did so order, and Madonna not only strongly supported the state in this measure; she also condemned the woman, and the television companies for screening the breast-feeding event. Madonna has discovered that not every personal 'choice' is acceptable.

I have been watching Madonna for a while, ever since she moved into her forties, and especially since she gave birth to a son. Madonna is, I think, 'on the turn'. That is, she is in the process of evolving from girl rebel to mother of morality; from outrageous enfant terrible in full-throttle rebellion against her parents I believe that one of Ms Ciccone's first hit records was called 'Papa Don't Preach' — to domestic mullah with outspoken views about the social parameters of right and wrong. Presently she will be deploring the common use of coarse language and overexplicit imagery.

In any given culture there are a number of women in the public realm who arbitrate on manners and morals. Usually, these are middle-aged women who become the guardians of marriage, family life and general decorum. Historically, some of these Mullahs of Morality have been agony aunts — in the 1950s characters such as Mary Grant and Evelyn Holmes were ferociously bossy upholders of conventional morality but after Marje Proops, Anna Raeburn and Claire Rayner the agonyaunt role shifted from guardian of morality to sex therapist, thus leaving a vacancy for the Morality Mullah. For a while, Mary Whitehouse and Victoria Gillick filled the role, but in the last decade or so it has tended to be female newspaper columnists who arbitrate on Morals and Manners.

The undoubted leader of the Mothers of Morality at the present time is Ms Melanie Phillips of the Daily Mail (and occasionally of The Spectator) who, each week in her columns, disentangles right from wrong with clarity, courage and, above all, the strength of certainty. There are others of the genre, such as Janet Daley in the Daily Telegraph, Libby Purves in the Times, Melanie McDonagh in the London Evening Standard, Anne Atkins mostly in the broadcast media; and there are others, such as the delightful Sarah Sands in the Daily Telegraph, who are showing promising signs of developing from rebel girl to defender of tradition.

Melanie Phillips has made that classic journey from young radical Leftie to 'rightwing authoritarian', as some would categorise it. What altered Ms Phillips's world-view, it seems to me, was the revelation of what let-it-all-hang-out Sixties culture had done to education. It turned her from radical Guardianista to protective Jewish mother, determined to establish proper standards for the next generation of schoolchildren, It is a right and natural development, and a more necessary social role than that of, say, women such as Edwina Currie who arc stilt talking about the sex revolution in their fifties.

I return to the Madonna question: this evolution from female rebel to moralistic mother quite often happens as a woman hits her forties, and, in the case of feminists, it is even more frequently prompted by the birth of a son. When a woman becomes mother to a son, her perspective on the sex wars usually begins to change. A young woman sometimes sees men and masculine rule as a form of tyranny — 'the patriarchy'. Certainly, that was how I viewed men when I was a young girl. Men were creatures who either had to be flattered and pleased — the more to gain their favour, since they were in charge of everything important — or to be rebelled against. Their rule had to be overthrown. Objectively, there was some truth in this in the 1950s and 1960s. Men were in charge of anything that occurred outside of the home.

But when a woman has a son the vulnerability of men is suddenly revealed, and the difficulty of being, or becoming, a man is glimpsed. From the earliest moments of life, boys have a harder time than girls in survival, formation, self-realisation. This begins to colour controversial questions such as rape: the mothers of sons do not automatically 'side' with a woman who alleges rape. We see just how easy it is for a man to be sexually manipulated and emotionally controlled by a woman. This is not to excuse the real crime of rape, but it does greatly nuance ambivalent situations of socalled 'date rape'. The mothers of sons also see the great dangers in a society awash with sexual coarseness; there is a line to be drawn between personal liberty and societal licence.

And while the rebel girl is contemptuous of marriage — many are the feminist quips which disparage marriage Ca woman needs a man like a fish needs a bicycle') — the mothers of sons begin to see how vital it is that marriage is upheld for the good of society. Most men need to be married to develop their sense of responsibility, commitment and family values. Marriage is, it is true, sometimes more exacting for women than for men, but it is still a necessary institution for the sake of the next generation. Sex-'n'-drugs-'n'-rock-'n'-roll might seem fine and dandy to the rebel girl, but you cannot do motherhood and wild living at the same time. The tragic story of Paula Yates demonstrated that all too graphically.

Should we be libertarian or authoritarian? Both are necessary social components. We need people to affirm personal liberty, but we also require the nostrums of mature women who point out that there are firm concepts of right and wrong, and proper standards of manners and morals. There is, in British society at present, a most disastrous retreat from bourgeois culture, as the reports of Theodore Dalrymple in this magazine so alarmingly illustrate. Capitalism has produced an uncouth strain of people who have no idea how to behave, think only of their own gratification, shriek foulmouthed abuse at anyone who frustrates their whims for two seconds, and have never been properly told off for their appalling conduct. We need more, not fewer, female Mullahs to wag the finger and lay down the law.