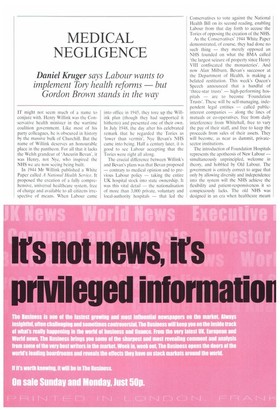 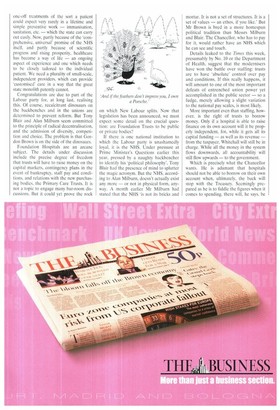 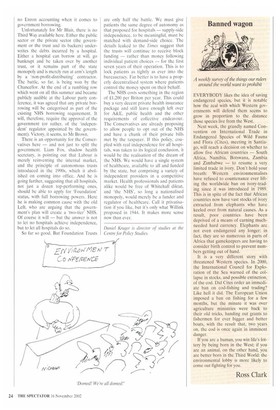 IT might not seem much of a name to conjure with. Henry Willink was the Conservative health minister in the wartime coalition government. Like most of his party colleagues, he is obscured in history by the massive bulk of Churchill. But the name of Willink deserves an honourable place in the pantheon. For all that it lacks the Welsh grandeur of `Aneurin Bevan', it was Henry, not Nye, who inspired the NHS we are now seeing being built.

In 1944 Mr Willink published a White Paper called A National Health Service. It proposed the creation of a fully comprehensive, universal healthcare system, free of charge and available to all citizens irrespective of means. When Labour came into office in 1945, they tore up the Willink plan (though they had supported it hitherto) and presented one of their own. In July 1948, the day after his celebrated remark that he regarded the Tories as 'lower than vermin', Nye Bevan's NHS came into being. Half a century later, it is good to see Labour accepting that the Tories were right all along.

The crucial difference between Willink's and Bevan's plans was that Bevan proposed — contrary to medical opinion and to previous Labour policy — taking the entire UK hospital stock into state ownership. It was this vital detail the nationalisation of more than 3,000 private, voluntary and local-authority hospitals — that led the Conservatives to vote against the National Health Bill on its second reading, enabling Labour from that day forth to accuse the Tories of opposing the creation of the NHS.

As the Conservatives' 1944 White Paper demonstrated, of course, they had done no such thing — they merely opposed an NHS founded on what the BMA called 'the largest seizure of property since Henry VIII confiscated the monasteries'. And now Alan Milburn, Bevan's successor at the Department of Health, is making a belated restitution. This week's Queen's Speech announced that a handful of -three-star trusts' — high-performing hospitals — are to become 'Foundation Trusts'. These will be self-managing, independent legal entities — called publicinterest companies — along the lines of mutuals or co-operatives, free from daily interference from Whitehall, free to vary the pay of their staff, and free to keep the proceeds from sales of their assets. They will become, as near as dammit, privatesector institutions.

The introduction of Foundation Hospitals represents the apotheosis of New Labour — simultaneously unprincipled, welcome in theory, and hobbled by Old Labour. The government is entirely correct to argue that only by allowing diversity and independence into the system will the NHS achieve the flexibility and patient-responsiveness it so conspicuously lacks. The old NHS was designed in an era when healthcare meant one-off treatments of the sort a patient could expect very rarely in a lifetime and simple preventive work — immunisation, sanitation, etc. — which the state can carry out easily. Now, partly because of the 'comprehensive, universal' promise of the NHS itself, and partly because of scientific progress and rising prosperity, healthcare has become a way of life — an ongoing aspect of experience and one which needs to be closely tailored to the individual patient. We need a plurality of small-scale, independent providers, which can provide 'customised' care in a way that the great state monolith patently cannot.

Congratulations are due to part of the Labour party for, at long last, realising this. Of course, recalcitrant dinosaurs on the backbenches and in the unions are determined to prevent reform. But Tony Blair and Alan Milburn seem committed to the principle of radical decentralisation, and the admission of diversity, competition and choice. The problem is that Gordon Brown is on the side of the dinosaurs.

Foundation Hospitals are an arcane subject. The details under discussion include the precise degree of freedom that trusts will have to raise money on the capital markets, contingency plans in the event of bankruptcy, staff pay and conditions, and relations with the new purchasing bodies, the Primary Care Trusts. It is not a topic to engage many bar-room discussions. But it could yet prove the rock on which New Labour splits, Now that legislation has been announced, we must expect some detail on the crucial question: are Foundation Trusts to be public or private bodies?

If there is one national institution to which the Labour party is unashamedly loyal, it is the NITS. Under pressure at Prime Minister's Questions earlier this year, pressed by a naughty backbencher to identify his 'political philosophy', Tony Blair had the presence of mind to splutter the magic acronym. But the NHS, according to Alan Milburn, doesn't actually exist any more — or not in physical form, anyway. A month earlier Mr Milburn had stated that the NHS 'is not its bricks and mortar. It is not a set of structures. It is a set of values — an ethos, if you like.' But Mr Brown is bred in a more homespun political tradition than Messrs Milburn and Blair. The Chancellor, who has to pay for it, would rather have an NHS which he can see and touch, Details leaked to the Times this week, presumably by No. 10 or the Department of Health, suggest that the modernisers have won the battle over staffing: trusts are to have 'absolute' control over pay and conditions. If this really happens, it will amount to one of the most important defeats of entrenched union power yet accomplished in the public sector — so a fudge, merely allowing a slight variation to the national pay scales, is most likely.

More important even than staffing, however, is the right of trusts to borrow money. Only if a hospital is able to raise finance on its own account will it be properly independent, for, while it gets all its capital funding — as well as its revenue — from the taxpayer, Whitehall will still be in charge. While all the money in the system flows downwards, all accountability will still flow upwards — to the government.

Which is precisely what the Chancellor wants. He is adamant that hospitals should not be able to borrow on their own account when, ultimately, the buck will stop with the Treasury. Seemingly prepared as he is to fiddle the figures when it comes to spending, there will, he says, be no Enron accounting when it comes to government borrowing.

Unfortunately for Mr Blair, there is no Third Way available here. Either the public sector or the private sector (the government or the trust and its backers) underwrites the debts incurred by a hospital. Either a hospital can borrow at will, go bankrupt and be taken over by another trust, or it remains part of the state monopoly and is merely run at arm's length by a non-profit-distributing' contractor. The battle, so far, is being won by the Chancellor. At the end of a rumbling row which went on all this summer and became publicly audible at the Labour party conference, it was agreed that any private borrowing will be categorised as part of the existing NHS borrowing requirement. It will, therefore, require the approval of the government (or rather, of the 'independent' regulator appointed by the government). Victory, it seems, to Mr Brown.

There is an opportunity for the Conservatives here — and not just to split the government. Liam Fox, shadow health secretary, is pointing out that Labour is merely reinventing the internal market, and the principle of autonomous trusts introduced in the 1990s, which it abolished on coming into office. And he is going further, suggesting that all hospitals, not just a dozen top-performing ones, should be able to apply for 'Foundation' status, with full borrowing powers. Here he is making common cause with the old Left, who are arguing that the government's plan will create a 'two-tier' NHS. Of course it will — but the answer is not to let no hospitals achieve independence, but to let all hospitals do so.

So far so good. But Foundation Trusts are only half the battle. We must give patients the same degree of autonomy as that proposed for hospitals — supply-side independence, to be meaningful, must be matched with demand-side choice. The details leaked to the Times suggest that the trusts will continue to receive block funding — rather than money following individual patient choices for the first seven years of their operation. This is to lock patients as tightly as ever into the bureaucracy. Far better is to have a properly decentralised system where patients control the money spent on their behalf.

The NHS costs something in the region of £1,200 per Briton per year. This could buy a very decent private health insurance package and still leave enough left over for A&E, public health and the other requirements of collective endeavour. The Conservatives are already proposing to allow people to opt out of the NHS and have a chunk of their private bills met by the taxpayer. If this policy, coupled with real independence for all hospitals, was taken to its logical conclusion, it would be the realisation of the dream of the NHS. We would have a single system of healthcare, available to all and funded by the state, but comprising a variety of independent providers in a competitive market. Health professionals and patients alike would be free of Whitehall diktat, and 'the NHS', so long a nationalised monopoly, would merely be a funder and regulator of healthcare. Call it privatisation if you like, but it's only what Willink proposed in 1944. It makes more sense now than ever.

Daniel Kruger is director of studies at the Centre for Policy Studies.