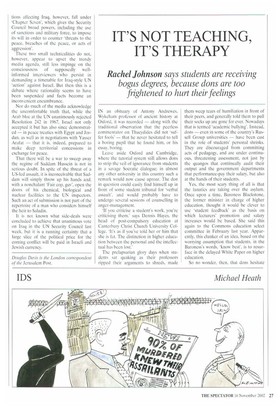 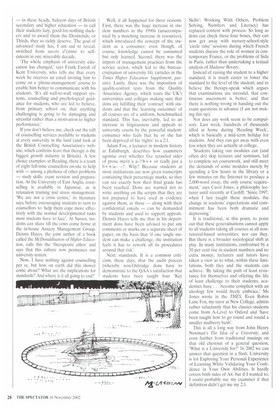 IT'S NOT TEACHING, IT'S THERAPY

bogus degrees, because dons are too frightened to hurt their feelings

IN an obituary of Antony Andrewes, Wykeham professor of ancient history at Oxford, it was recorded along with the traditional observation that the peerless commentator on Thucydides did not 'suffer fools — that he never hesitated to tell a borino, pupil that he found him, or his essay, boring.

Leave aside Oxford and Cambridge, where the tutorial system still allows dons to strip the veil of ignorance from students in a savage Socratic dialogue; in almost any other university in this country such a remark would now cause uproar. The don in question could easily find himself up in front of some student tribunal for 'verbal assault'. and would probably have to undergo several sessions of counselling in anger-management.

'If you criticise a student's work, you're criticising them,' says Dennis Hayes, the head of post-compulsory education at Canterbury Christ Church University College. Ifs as if you've told her or him that she is fat. The distinction in higher education between the personal and the intellectual has been lost.'

The prelapsarian glory days when students sat quaking as their professors ripped their arguments to shreds, made them weep tears of humiliation in front of their peers, and generally told them to pull their socks up are gone for ever. Nowadays that is termed 'academic bullying'. Instead, dons — even in some of the country's Russell Group universities — have been cast in the role of students' personal shrinks. They are discouraged from committing acts of pedagogy, and are under continuous, threatening assessment, not just by the quangos that continually audit their output and the government departments that performance-pay their salary, but also at the hands of their students.

Yes, the most scary thing of all is that the lunatics are taking over the asylum. Once upon a time, Baroness Blackstone, the former minister in charge of higher education, thought it would be clever to use 'student feedback' as the basis on which lecturers' promotion and salary increases would be based. She said this again to the Commons education select committee in February last year. Apparently, this clunker of an idea, based on the worrying assumption that students, in the Baroness's words, 'know best', is to resurface in the delayed White Paper on higher education.

So no wonder, then, that dons hesitate — in these heady, halcyon days of British secondary and higher education — to call their students lazy, good-for-nothing slackers and to award them the Desmonds, or Thirds, they so richly deserve. The goal of advanced study has, I am sad to reveal, switched from succes d'estime to selfesteem in one miserable decade.

'The whole emphasis of university education has changed,' says Frank Furedi of Kent University-, who tells me that every week he receives an email inviting him to come on a 'phone-management' course to enable him better to communicate with his students. 'It's all wall-to-wall support systerns, counselling and psychological guidance for students, who are led to believe, from primary school on, that anything challenging is going to be damaging and stressful rather than a motivation to higher performance.'

If you don't believe me, check out the raft of counselling services available to students at every university in the land (and look at the British Counselling Association's website, which confirms fears that therapy is the biggest growth industry in Britain). A few choice examples: at Reading, there is a team of eight full-time counsellors on-site to help with — among a plethora of other problems — study skills, exam revision and preparation. At the University of East Anglia, counselling is available in Japanese, as is relaxation training and stress management. 'We are not a crisis centre,' its literature says, before encouraging students to turn to counsellors to 'help them cope more effectively with the normal developmental tasks most students have to face'. At Sussex, students can share till the cows come home at the in-house Anxiety Management Group. Dennis Hayes, the joint author of a book called the McDonaldisation of Higher Education, calls this the 'therapeutic ethos' and says that this culture now permeates our university system.

Now. I have nothing against counselling per se, but how on earth did this shower come about? What are the implications for standards? And where is it all going to end? Well, it all happened for three reasons. First, there was the huge increase in student numbers in the 1990s (unaccompanied by a matching increase in resources), which introduced the concept of the student as a consumer, even though, of course, knowledge cannot be consumed but only learned. Second, there was the import of management practices from the service sector, which led to the bureaucratisation of university life (articles in the Times Higher Education Supplement, passim). Lastly, there was the imposition of quality-control tests from the Quality Assurance Agency, which tours the UK's universities and colleges making sure that dons are fulfilling their 'contract' with students and that the 'learning outcomes' of all courses are of a uniform, benchmarked standard. This has, inevitably, led to an increase in litigiousness and appeals to university courts by the powerful studentconsumer who feels that he or she has been deprived of his 'rights' to a 2:1.

Adam Fox, a lecturer in modern history at Edinburgh, describes how examiners agonise over whether five scrawled sides of prose merit a a–?/b++ or really just a b+ +/a– –?. Why? Because students at most institutions are now given transcripts containing their percentage marks, so they can see exactly how their final grade has been reached. Dons are warned not to write anything on the scripts that they are not prepared to have used in evidence against them, as these — along with their confidential emails — can be demanded by students and used to support appeals. Dennis Hayes tells me that in his department dons have been advised to put any comments or marks on a separate sheet of paper, on the basis that 'if one single student can make a challenge, the institution feels it has to rework all its procedures around that risk'.

Next: standards. It is a common criticism, these days, that the audit process (whereby non-Oxbridge dons have to demonstrate to the QAA's satisfaction that students have been taught four 'Key Skills': Working With Others, Problem Solving, Numbers and Literacy) has replaced content with process. So long as dons can check these four boxes, they can now get away with nursery-school-style 'circle time' sessions during which French students discuss the role of women in contemporary France, or the problems of Sida in Paris, rather than undertaking a textual analysis of Madame Bovaty.

Instead of raising the student to a higher standard, it is much easier to lower the standard to the level of the student; and to believe the therapy-speak which argues that examinations are stressful, that continuous assessment is better, and that there is nothing wrong in handing out the exam questions in advance (I am not making this up).

Nor does any work seem to be compulsory. Last week, hundreds of thousands idled at home during 'Reading Week', which is basically a mid-term holiday for students, And they can get away with even less when they are actually at college.

'Students taking our modules can (and often do) skip lectures and seminars, fail to complete set coursework, and still meet the demands of some modules merely by spending a few hours in the library or a few minutes on the Internet to produce a 2,000-word essay, the only course requirement,' says Carol Jones, a philosophy lecturer until recently at Cardiff. 'Since 1997, when I last taught these modules, the change in students' expectations and commitment has been both dramatic and depressing.'

It is traditional, at this point, to point out that these generalisations cannot apply to all students taking all courses at all nontutorial-based universities; nor can they. But there is a broader sociological shift at play. In many institutions, confronted by a 50 per cent rise in student numbers and no extra money, lecturers and tutors have taken a view as to what, within these limitations, both they and the students can achieve. 'By taking the path of least resistance for themselves and offering the life of least challenge to their students, academics have . . . become complicit with an ideology few would freely embrace,' Ms Jones wrote in the THES. Even Robin Lane Fox, my tutor at New College, admits rather reluctantly that his classics students come from A-Level to Oxford and 'have been taught how to go round and round a smaller mulberry bush'.

This is all a long way from John Henry Newman's The Idea of a University, and even further from traditional musings on that old chestnut of a general question, 'What is a University for?' In 2002 we can answer that question in a flash, University is for Exploring Your Personal Experience of Learning While Validating Your Confidence in Your Own Abilities. It hardly covers both sides of A4, but if I wanted to, I could probably sue my examiner if that definition didn't get me my 2:1.