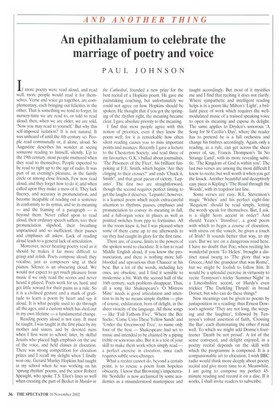 Page 36, 16 November 2002 — An epithalamium to celebrate the marriage of poetry and voice
Close

An epithalamium to celebrate the marriage of poetry and voice

If more poetry were read aloud, and read well, more people would read it for themselves. Verse and voice go together, are complementary, each bringing out felicities in the other. That is something we tend to forget. In nursery-time we are read to, or told to read aloud; then, when we are older, we are told, 'Now you may read to yourself.' But why this self-imposed isolation? It is not natural. It was unheard of until the 4th century AD. People read communally or, if alone, aloud. So Augustine describes his wonder at seeing someone reading to himself, silently. Up to the 19th century, most people muttered when they read to themselves. People expected to be read to right up to the age of radio. It was part of an evening's pleasure, in the family circle or among close friends. Few now read aloud, and they forget how to do it; and when called upon they make a mess of it. They lack fluency, and accuracy in pronunciation, and become incapable of reading out a sentence in conformity to its syntax, and so its meaning — and the framing of a paragraph — is beyond them. Never called upon to read aloud, their ordinary speech suffers, too: their pronunciation slipshod, their breathing unpractised and so inefficient, their pauses and emphases all askew. hick of reading aloud leads to a general lack of articulation.

Moreover, never hearing poetry read as it should be makes it far more difficult to grasp and relish. Poets compose aloud; they vocalise, just as composers sing at their pianos. Silence is an obscuring cloud. We would not expect to get much pleasure from music if we only read the scores and never heard it played. Poets work for us, hard, and get little reward for their pains as a rule. So it is a civilised gesture and a mark of gratitude to learn a poem by heart and say it aloud. It is what people used to do through all the ages, and a custom which has died out in my own lifetime — a fundamental change.

Reading poetry aloud is not easy. It must be taught. I was taught in the first place by my mother and sisters, and by devoted nuns when I first went to school; later, by skilful Jesuits who placed high emphasis on the use of the voice, and held classes in elocution. There was strong competition for elocution prizes and I recall my delight when I finally won one. Gerard Manley Hopkins had taught at my school when he was working on his 'sprung rhythm' poems, and the actor Robert Speaight, who spoke T.S. Eliot's lines so well when creating the part of Becket in Murder in the Cathedral, founded a new prize for the best recital of a Hopkins poem. He gave me painstaking coaching, but unfortunately we could not agree on how Hopkins should be spoken. He thought that if you got the springing of the rhythm right, the meaning became clear. I gave absolute priority to the meaning.

I find that most people agree with this notion of priorities, even if they know the poem well; for it is remarkable how often silent reading causes you to miss important points and nuances, Recently I gave a lecture to the Chesterton Society, and read three of my favourites: G.K.'s ballad about journalists, 'The Prisoners of the Fleet', his brilliant funpoking at F.E. Smith, which begins 'Are they clinging to their crosses?' and ends 'Chuck it, Smith!', and that great paean of victory, 'Lepanto'. The first two are straightforward, though the second requires perfect timing to get the laughs it deserves. 'Lepanto', however, is a learned poem which needs extra-careful attention to rhythms, pauses, emphases and pronunciation to convey its meaning in full, and a full-organ voice in places as well as pointed switches from ppp to fortissimo. All in the room knew it, but I was pleased when some of them came up to me afterwards to say they had caught its glory for the first time.

There are, of course, limits to the powers of the spoken word to elucidate. It is fun to read Middle English aloud, if you know the pronunciation, and there is nothing more fullblooded and uproarious than Chaucer at his best. But a lot of the words, including key ones, are obsolete, and I find it sensible to modernise a bit. With the second half of the 16th century, such problems disappear. Thus, all a song like Shakespeare's '0 Mistress Mine' needs is good articulation and attention to its by no means simple rhythm — plus of course, exhilaration, born of delight, in the sheer vivacity of the language. All those songs — like 'Full Fathom Five', 'Where the Bee Sucks', 'Come Unto These Yellow Sands' and 'Under the Greenwood Tree', to name only four of the best — Shakespeare had set to music and intended to be chanted by a piping treble or sonorous alto. But it is a test of your skill to make them work when simply read — a perfect exercise in elocution, since each requires subtle voice-changes.

What a reciter cannot do, beyond a certain point, is to rescue a poem from hopeless obscurity. I know that Browning's impenetrable `Sordello' is now acclaimed by some academics as a misunderstood masterpiece and

taught accordingly. But most of it mystifies me and I find that reciting it does not clarify. Where sympathetic and intelligent reading helps is in a poem like Milton's 'Light', a brilliant piece of work which requires the wellmodulated music of a trained speaking voice to open its meaning and expose its delight. The same applies to Dryden's sonorous 'A Song for St Cecilia's Day', where the reader has to pretend he is a full orchestra and change his timbres accordingly. Again, only a reading, as a rule, can get across the sheer power of, say, Francis Thompson's 'In No Strange Land', with its more revealing subtitle, 'The Kingdom of God is within you'. The last two verses are among the most difficult I know to recite, but well worth it when you get the knack. Another beautiful and deceptively easy piece is Kipling's 'The Road through the Woods', with its trapdoor last line.

Some verses are easy. R.L. Stevenson's magic 'Wishes' and his perfect eight-line 'Requiem' should be read simply, letting the words speak for themselves. But, I ask, is a slight Scots accent in order? And should Yeats's Innisfree', a good poem with which to begin a course of elocution, with stress on the vowels, be given a touch of Irish? It sounds better that way, to my ears. But we are on a dangerous road here. I have no doubt that Poe, when reciting his wonderful poem 'To Helen', brought a distinct nasal twang to 'The glory that was Greece,/And the grandeur that was Rome', but we might be foolish to follow him. It would be a splendid exercise in virtuosity to recite Tennyson's tricky 'Summer Night' in a Lincolnshire accent, or Hardy's even trickier 'The Darkling Thrush' in broad Dorset; but who can do these things?

New meanings can be given to poems by juxtaposition in a reading: thus Ernest Dowson's agnostic 'They are not long, the weeping and the laughter', followed by Tennyson's robust assertion of faith, 'Crossing the Bar', each illuminating the other if read well. To which we might add Donne's fourteener 'Death be not proud'. A lot of the sense conveyed, and delight enjoyed, in a poetry recital depends on the skill with which the programme is composed. It is a companionable art to elocution. I wish BBC radio would think more deeply about poetry recital and give more time to it. Meanwhile, I am going to compose my perfect 45minute reading and record it on a disc. If it works, I shall invite readers to subscribe.