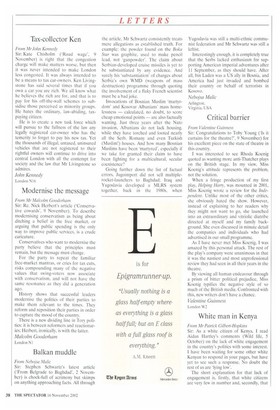 From Nebojsa Malic Sir: Stephen Schwartz's latest article (From Belgrade to Baghdad', 2 November) is chock-full of acrimony but skimps on anything approaching facts. All through the article, Mr Schwartz consistently treats mere allegations as established truth. For example: the powder found on the Boka Star was graphite, used to make pencil lead, not 'gunpowder'. The claim about Serbian-developed cruise missiles is yet to be substantiated by any evidence. And surely his 'substantiation' of charges about Serbia's own WMD (weapons of mass destruction) programme through quoting the involvement of a flaky French scientist must be a bad joke.

Invocations of Bosnian Muslim 'martyrdom' and Kosovar Albanians' mass homelessness — calculated, no doubt, to score cheap emotional points — are also factually wanting. Just three years after the Nato invasion, Albanians do not lack housing, while they have torched and looted nearly all the Serb, Romany and even Turkish (Muslim!) houses. And how many Bosnian Muslims have been 'martyred', especially if we take for granted their claim to have been fighting for a multicultural, secular coexistence?

Going further down the list of factual errors, Jugoimport did not sell multiplerocket-launchers to Baghdad; Iraq and Yugoslavia developed a MLRS system together, back in the 1980s, when Yugoslavia was still a multi-ethnic communist federation and Mr Schwartz was still a leftist.

Interestingly enough, it is completely true that the Serbs lacked enthusiasm for supporting American imperial adventures after 11 September, as they should have. After all, bin Laden was a US ally in Bosnia, and America had just invaded and bombed their country on behalf of terrorists in Kosovo.