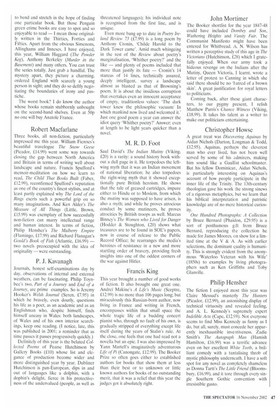 Saul David's The Indian Mutiny (Viking. £20) is a rarity: a sound history book without a dull page in it. He torpedoes the leftwing myth that it was an Indian movement of national liberation; he also torpedoes the right-wing myth that it showed exceptionally pure British heroism. He shows that the tale of greased cartridges, impure either to Hindu or to Moslem, from which the mutiny was supposed to have arisen, is also a myth; and while he proves atrocious conduct by some mutineers, he proves atrocities by British troops as well. Marcus Binney's The Women who Lived for Danger (Hodder & Stoughton, £20) shows what treasures are to be found in SOE's papers, now in course of release to the Public Record Office; he rearranges the media's heroines of resistance in a new and more startling order of bravery, providing fresh insights into one of the oddest corners of the war against Hitler.