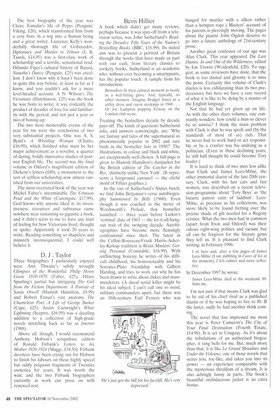 A book which didn't get many reviews, perhaps because it was spin-off from a television series, was John Sutherland's Reading the Decades: Fifty Years of the Nation's Bestselling Books (BBC, £16.99). Its stated aim was to present a portrait of Britain through the works that have made us part with our cash, from literary classics to cookery books. Sutherland is an academic who, without ever becoming a smartypants, has the popular touch. A sample from his introduction: Bestsellers fit their cultural moment as neatly as a well-fitting glove. And, typically, no other moment. Imagine Bridget Jones in a utility dress and rayon stockings in 1948 . . Or Joe Lampton popping Ecstasy on the London club scene.

Treating the bestsellers decade by decade pays off. The kinds of questions Sutherland asks, and answers convincingly, are: 'Why are fantasy and tales of the supernatural so phenomenally popular in 2002 and rare birds in the bestseller lists in 1950?' The illustrations, in colour and black and white, are exceptionally well chosen. A full page is given to Hamish Hamilton's dustjacket for the British edition of The Catcher in the Rye, 'distinctly unlike New York'. (It represents a fairground carousel — the cliche motif of Fifties graphics.)

In the van of Sutherland's Sixties batch, we find John Betjeman's verse autobiography Summoned by Bells (1960). Even though it was couched in the metre of Wordsworth's Prelude, that bestseller launched — three years before Larkin's 'seminal' date of 1963 — the let-it-all-hangout trait of the swinging decade. Autobiographies have become more flensingly confessional since then. The latest in the Cellini-Rousseau-Frank Harris-Ackerley-Kirkup tradition is Brian Masters' Getting Personal (Constable, £16.99). With unflinching honesty he writes of his difficult childhood, his homosexuality and his Socrates-Plato friendship with Gilbert Harding, and tries to work out why he has been drawn to write about dukes and massmurderers. (A ducal serial killer might be his ideal subject. I can't call one to mind, military commanders apart, but there was an 18th-century Earl Ferrers who was

hanged for murder with a silken rather than a hempen rope.) Masters' account of his parents is piercingly moving. The pages about the pianist John Ogdon deserve to go into a future anthology of 21st-century prose.

Another great confessor of our age was Alan Clark. This year appeared The Last Diaries: In and Out of the Wilderness, edited by Ion Trewin (Weidenfeld, £20). To sug gest, as some reviewers have done, that the book is too dismal and gloomy is to miss the point. Certainly this volume of Clark's diaries is less exhilarating than its two predecessors; but here we have a rare record of what it is like to be dying by a master of the English language.

Not that he had yet given up on life. As with the other diary volumes, one con stantly wonders: how could a man so clever be so unwise? I think the main problem with Clark is that he was spoilt and (by the standards of most of us) rich. That he never had to work hard or act responsibly or be a crawler was his undoing as a politician. (Even in these declining years, he still half thought he could become Tory leader.) It is hard to think of two men less alike than Clark and James Lees-Milne, the other immortal diarist of the late 20th cen tury. Clark, with his fast cars and fast women, was described on a recent televi sion programme about 'Tory Boys' as 'the bizarre patron saint of laddism'. LeesMilne, as precious as his collections, was more likely to be found fretting over the precise shade of gilt needed for a Regeny cornice. What the two men had in common (apart from Eton and Oxford) was their odious right-wing politics and racism; but all can be forgiven for the literary gems they left us. It is pleasant to find Clark writing, in February 1996:

I sit here and, after a few pages of James Lees-Milne (I am dabbling in Caves of Ice at the moment), I felt calmer and more reflective.

James Lees-Milne died at the weekend. 89. Suits me.

I'm not sure if that means Clark was glad to be rid of his chief rival as a published diarist or if he was hoping to live to 89. If the latter, sadly he had another think coming.

The novel that has impressed me most this year is Peter Cameron's The City of Your Final Destination (Fourth Estate, £14.99). It is set in Uruguay. As it's about the tribulations of an authorised biographer, it rang bells for me. But, much more than that, it is like Le Grand Meaulnes and Under the Volcano, one of those novels that seizes you, roc-like, and takes you into its power — an experience comparable with the mysterious thraldom of a dream. It is also achingly funny in parts. The book's beautiful orchidaceous jacket is an extra bonus.