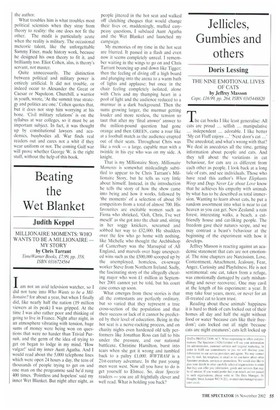 MILLIONAIRE MOMENTS: WHO WANTS TO BE A MILLIONAIRE — MY STORY by Chris Tarrant Time Warner Books, £7.99, pp. 358, ISBN 0316724564 Iam not an avid television watcher, so I did not tune into Who Wants to be a Millionaire? for about a year, but when I finally did, like nearly half the nation (19 million viewers at its peak) I was gripped. At the time I was also rather poor and thinking of going to live in France. Night after night, in an atmosphere vibrating with tension, huge sums of money were being won on questions that were no harder than Trivial Pursuit, and the germ of the idea of trying to get on began to lodge in my mind. 'How vulgar!' said my inner Aunt Agatha. And I would read about the 5,000 telephone lines which were open 24 hours a day, the tens of thousands of people trying to get on and one man on the programme said he'd rung 400 times. 'Pointless and hopeless' said my inner Wet Blanket. But night after night, as

people jittered in the hot seat and walked off clutching cheques that would change their lives or, maddeningly, muffed easypeasy questions, I subdued Aunt Agatha and the Wet Blanket and launched my campaign.

My memories of my time in the hot seat are blurred. It passed in a flash and even now it seems completely unreal. I remember waiting in the wings to go on and Chris Tarrant bouncing up and down like Tigger; then the feeling of diving off a high board and plunging into the arena to a warm bath of lights and applause; but once in the chair feeling completely isolated, alone with Chris and my thumping heart in a pool of light and the audience reduced to a murmur in a dark background. Then the sums growing larger, the murmur getting louder and more restless, the tension so taut that after my 'final answer' answer to the million-pound question had gone orange and then GREEN, came a roar like at a football match as the audience erupted out of their seats. Throughout Chris was like a rock — a large, capable man with a twinkle in his eye who was on my side. A knight.

That is my Millionaire Story. Millionaire Moments is somewhat misleadingly subtitled to appear to be Chris Tarrant's Millionaire Story, but he tells us very little about himself. Instead, in the introduction he tells the story of how the show came into being and how it works, followed by 'the moments' of a selection of about 50 competitors from a total of almost 700. His favourites are excitable women such as Fiona who shrieked, `Ooh, Chris, I've wet meself as she got into the chair and, sitting in her soggy knickers, screamed and sobbed her way to £32,000. He shudders over the few who go home with nothing, like Michelle who thought the Archbishop of Canterbury was the Marsupial of All England, and marvels over huge unexpected wins such as the £500,000 scooped up by the unemployed, homeless, ex-sewage worker Steve from Northern Ireland. Sadly, the fascinating story of the allegedly cheating major who won £1 million in September 2001 cannot yet be told, but his court case comes up soon.

What emerges from these stories is that all the contestants are perfectly ordinary, but so varied that they represent a true cross-section of the population and that their success or lack of it cannot be predicted by their level of education. Being in the hot seat is a nerve-racking process, and on charity nights even hardened old telly performers like Jonathan Ross can fall to bits under the pressure, and our national battleaxe, Christine Hamilton, burst into tears when she got it wrong and tumbled back to a paltry £1,000. WWTBAM is a 21st-century adventure. In the past young men went west. Now all you have to do is get yourself to Elstree. So, dear Speccie readers — you are all frightfully clever and well read. What is holding you back?