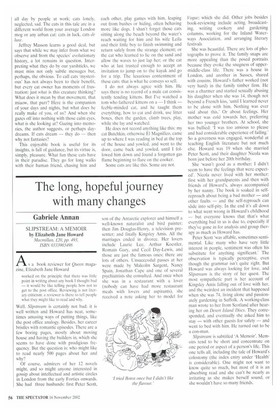 The long, hopeful journey with many changes

worked on the principle that there was little point in writing about any book I thought had — it would be like telling people how not to get to the post office. Reviewing is not literary criticism: a reviewer is there to tell people what they might like to read and why.

Well, Slipstream is certainly not bad; it is well written and Howard has neat, sometimes amusing ways of putting things, like the post office analogy. Besides, her career bristles with romantic episodes. There are a few boring pages, mostly about moving house and having the builders in, which she seems to have done with prodigious frequency. But the question is: who might like to read nearly 500 pages about her and why?

Of course, admirers of her 12 novels might, and so might anyone interested in gossip about intellectual and artistic circles in London from the early Forties onwards. She had three husbands: first Peter Scott,

son of the Antarctic explorer and himself a well-known naturalist and bird painter; then Jim Douglas-Henry, a television presenter; and finally Kingsley Amis. All the marriages ended in divorce. Her lovers include Laurie Lee, Arthur Koestler, Romain Gary, and Cecil Day-Lewis, and those are just the famous ones: there are lots of others. Unsuccessful passes at her were made by Malcolm Sargent, Nancy Spain, Jonathan Cape and one of several psychiatrists she consulted. And once when she was in a restaurant with a lover (nobody can have had more restaurant meals with lovers and aspirants), she received a note asking her to model for

Vogue; which she did. Other jobs besides book-reviewing include acting, broadcasting, writing cookery and gardening columns, working for the Inland Waterways Association, and arranging literary festivals She was beautiful. There are lots of photographs to prove it. The family snaps are more appealing than the posed portraits because they evoke the snugness of uppermiddle-class life. There was a house in London, and another in Sussex, shared with cousins. Howard's father worked (not very hard) in the family timber firm. He was a charmer and started sexually abusing his daughter when she was 14, though not beyond a French kiss, 'until I learned never to be alone with him. Nothing was ever said about this.' Or about feelings. Her mother was cold towards her, preferring her two younger brothers. At school, she was bullied: 'I was too anxious to please and had considerable experience of failing.' So a governess was engaged, wonderful at teaching English literature but not much else. Howard was 19 when she married Peter Scott, and their daughter Nicola was born just before her 20th birthday.

She 'wasn't good as a mother; I didn't seem to have the feelings that were expected'. Nicola never lived with her mother: first with her grandparents and then with friends of Howard's, always accompanied by her nanny. The book is soaked in selfreproach about being a bad mother — and other faults — and the self-reproach can slide into self-pity. In the end it's all down to what went wrong in Howard's childhood — but everyone knows that that's what everything bad in us is due to, especially if they've gone in for analysis and group therapy as much as Howard has.

Peter Scott 'was affable, sometimes sentimental. Like many who have very little interest in people, sentiment was often his substitute for anything significant.' The observation is typically perceptive, even though the grammar isn't quite right. But Howard was always looking for love, and Slipstream is the story of her quest. The most sympathetic part is her account of Kingsley Amis falling out of love with her, and the weirdest an incident that happened when she was 74, living alone and passionately gardening in Suffolk. A working-class man wrote to her from Scotland after hearing her on Desert Island Discs. They corresponded, and eventually she asked him to stay — with other guests for safety — and went to bed with him. He turned out to be a con-man.

Slipstream is subtitled 'A Memoir'. Memoirs tend to be short and concentrate on one period or aspect of a person's life. This one tells all, including the tale of Howard's colostomy (the index entry under 'Health' is considerable). One might not want to know quite so much, but most of it is an absorbing read and she can't be nearly as irritating as she makes herself sound, or she wouldn't have so many friends.