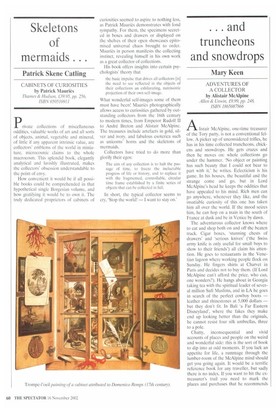 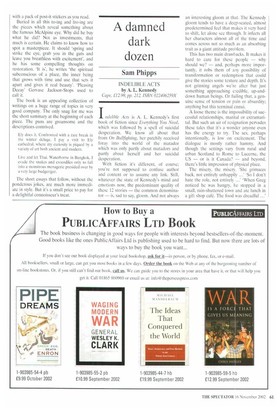 . . . and truncheons and snowdrops

ADVENTURES OF A COLLECTOR by Alistair McAlpine Allen & Unwin, .E9.99, pp. 248, ISBN 1865087866 Alistair McAlpine, one-time treasurer of the Tory party, is not a conventional fellow. A picker up of unconsidered trifles, he has in his time collected truncheons, chickens and snowdrops. He gets crazes and then he moves on: whole collections go under the hammer. 'No object or painting has such beauty that I could not bear to part with it,' he writes. Eclecticism is his game. In his houses, the beautiful and the strange come and go, but in Lord McAlpine's head he keeps the oddities that have appealed to his mind. Rich men can go anywhere, whenever they like, and the insatiable curiosity of this one has taken him all over the world. If the mood seizes him, he can hop on a train in the south of France at dusk and be in Venice by dawn.

The adventurous collector knows where to eat and shop both on and off the beaten track. Cigar boxes, 'stunning chests of drawers' and 'serious knives' (`the Swiss army knife is only useful for small boys to show to their friends') all claim his attention. He goes to restaurants in the Venetian lagoon where working people flock on Sunday. He fingers shirts at Charvet in Paris and decides not to buy them. (If Lord McAlpine can't afford the price, who can, one wonders?). He hangs about in Georgia taking tea with the spiritual leader of several million Sufi Muslims, and in LA he goes in search of the perfect cowboy boots — leather and rhinestones at 5.000 dollars — but they don't fit. In Bali 'a Far Eastern Disneyland', where the fakes they make end up looking better than the originals, he cannot resist four silk umbrellas, three to a pole.

Chatty, inconsequential and vivid accounts of places and people on the weird and wonderful side: this is the sort of book to dip into at odd moments. If you lack an appetite for life, a rummage through the lumber-room of the McAlpine mind should get you going again. It would be a terrific reference book for any traveller, but sadly there is no index. If you want to hit the extreasurer's trail you need to mark the places and purchases that he recommends

with a pack of post-it stickers as you read.

Buried in all this to-ing and fro-ing are the pieces which reveal something about the famous McAlpine eye. Why did he buy what he did? Not as investments, that much is certain. He claims to know how to spot a masterpiece. It should 'spring and strike the eye, grab you in the guts and leave you breathless with excitement', and he has some compelling thoughts on restoration. 'It is', he writes 'the spiritual subconscious of a place, the inner being that grows with time and use that sets it apart and gives it real beauty'. 'Pleasing Decay' Gervase Jackson-Stops used to call it.

The book is an appealing collection of writings on a huge range of topics in very good company. The only snag for me was the short summary at the beginning of each piece. The puns are groansome and the descriptions contrived.

Ely does it. Confronted with a rare break in the winter deluge, I pay a visit to Ely cathedral, where my curiosity is piqued by a variety of art both ancient and modern.

Live and let Thai. Waterborne in Bangkok, 1 evade the snakes and crocodiles only to fall into a monstrous menagerie presided over by a very large budgerigar.

The short essays that follow, without the ponderous jokes, are much more immediate in style. But it's a small price to pay for a delightful connoisseur's treat.