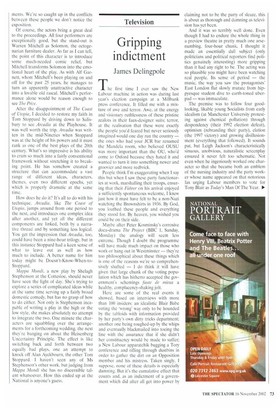 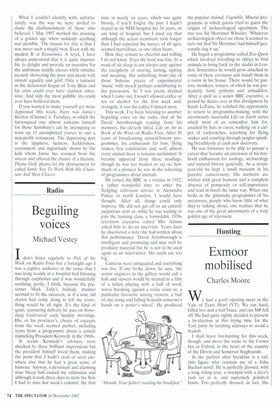 The first time I ever saw the New Labour machine in action was during last year's election campaign at a Millbank press conference. It filled me with a mixture of awe and terror. Awe, at the energy and visionary ruthlessness of these pristine zealots in their faux-designer suits; terror, at the realisation that these were exactly the people you'd feared but never seriously imagined would one day run the country — the ones who had your JCR bar renamed the Mandela room, who believed OUSU was more important than the OU, who'd come to Oxford because they hated it and wanted to turn it into something newer and groovier and more redbrick.

People think I'm exaggerating when I say this but when I saw these party functionaries at work, marshalling their troops, ensuring that their Fiihrer on his arrival enjoyed a sufficiently spontaneous welcome, I knew just how it must have felt to be a non-Nazi watching the Brownshirts in 1936. By God, you loathed these people and everything they stood for. By heaven, you wished you could be on their side.

Maybe after Peter Kosminsky's corrosive docu-drama The Project (BBC 1, Sunday, Monday) the analogy will seem less extreme. Though I doubt the programme will have made much impact on those who work or hang out in Westminster — they're too philosophical about these things which is one of the reasons we're so comprehensively shafted — I do think it will have given that large chunk of the voting population which has hitherto accepted the government's schemings faute de mieux a healthy, complacency-shaking jolt.

Here are some of the real events it showed, based on interviews with more than 100 insiders: an idealistic Blair Babe voting the 'wrong' way only to be hounded by the tabloids with information provided by her party's own dirty tricks department; another one being roughed-up by the whips and eventually blackmailed into toeing the line with the assurance that if she didn't her constituency would be made to suffer; a New Labour apparatchik bugging a Tory conference and rifling through dustbins in order to gather the dirt on an Opposition member and his mistress. Taken singly. I suppose, none of these details is especially damning. But it's the cumulative effect that counts and, as an indictment of a government which did after all get into power by claiming not to be the party of sleaze, this is about as thorough and damning as television has yet been.

And it was so terribly well done. Even though I had to endure the whole thing in a preview theatre in pretty much one arsenumbing, four-hour chunk, I thought it made an essentially dull subject (only politicians and political reporters find politics genuinely interesting) more gripping than it had any right to be. The acting was so plausible you might have been watching real people. Its sense of period — the music, the way you saw the protagonists' East London flat slowly mutate from hippyesque student dive to earth-toned uberpad — was immaculate.

The premise was to follow four goodlooking, likable young Socialists from early idealism (at Manchester University protesting against chemical pollution) through despondency (their 1992 election defeat), optimism (rebranding their party), elation (the 1997 victory) and growing disillusionment (everything that followed). It sounds pat, but Leigh Jackson's characteristically sinuous, unobvious, naturalistic screenplay ensured it never felt too schematic. Not even when he ingeniously worked one character so that she became both an emblem of the nursing industry and the party worker whose name appeared on that notorious fax urging Labour members to vote for Tony Blair as Today's Man Of The Year. 1111■

What I couldn't identify with, unfortunately, was the way we were invited to share the disillusionment of those who believed 1 May 1997 marked the dawning of a golden age when suddenly anything was possible. The reason for this is that was never such a stupid twat. Even with my modest B at Economics A level, I have always understood that it is quite impossible to delight and provide an incentive for the ambitious middle classes while simultaneously showering the poor and needy with instant equality and gold. Only a fantasist in the delusional league of Tony Blair and his crew could ever have claimed otherwise. And only the most gullible tits could ever have believed them.

If you wanted to make yourself yet more depressed this week, there was Jamie's Kitchen (Channel 4, Tuesday), in which the fat-tongued one almost redeems himself for those Sainsbury's ads by attempting to train up 15 unemployed yooves to run a non-profit restaurant. The depressing part is the lippiness, laziness, fecklessness, resentment and ingratitude shown by the kids whom Jamie has scooped from the streets and offered the chance of a lifetime. Please God. please let the denouement be called Jamie Sets To Work With His Chainsaw And Meat Cleaver.