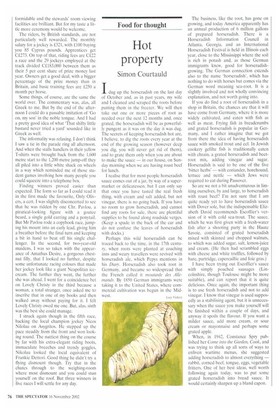 Idug up the horseradish on the last day of October and, as in past years, my wife and I cleaned and scraped the roots before putting them in the freezer. We will then take out one or more pieces of root as needed over the next 12 months and, once grated, the horseradish will be as powerfully pungent as it was on the day it was dug. The secrets of keeping horseradish hot are, I believe, to dig the roots every year at the end of the growing season (however deep you dig, you will never get rid of them), and to grate them only when you are about to make the sauce — in our house, on Sunday morning when we are having roast beef for lunch.

I realise that for most people horseradish sauce comes out of a jar, by way of a supermarket or delicatessen, but I can only say that once you have tasted the real fresh thing, with cream and salt added, but not vinegar, there is no going back. If you have no room to grow horseradish, and cannot find any roots for sale, there are plentiful supplies to be found along roadside verges. (Keep a spade in the back of the car and do not confuse the leaves of horseradish with docks.)

Perhaps this wild horseradish can be traced back to the time, in the 17th century, when roots were planted at coaching inns and weary travellers were revived with horseradish ale, which Pepys mentions in his Diary. Horseradish also took root in Germany, and became so widespread that the French called it moutarde des Allemands. By 1850 German immigrants were taking it to the United States, where commercial cultivation was begun in the Mid west. Lucy Vickery

The business, like the root, has gone on growing, and today America apparently has an annual production of 6 million gallons of prepared horseradish. There is a Horseradish Information Council in Atlanta, Georgia, and an International Horseradish Festival is held in Illinois each year, close to the Mississippi where the soil is rich in potash and, as those German immigrants knew, good for horseradishgrowing. The German connection extends also to the name 'horseradish', which has nothing to do with horses but comes via the German word meaning sea-root. It is a slightly involved and not wholly convincing explanation, and not worth going into.

If you do find a root of horseradish in a shop in Britain, the chances are that it will have come from Germany, where it is more widely cultivated, and eaten with fish as well as meat. Frying fish in breadcrumbs and grated horseradish is popular in Germany, and I rather imagine that we got from there the idea of having horseradish sauce with smoked trout and eel. In Jewish cookery gefilte fish is traditionally eaten with chrain, a grated horseradish and beetroot mix, adding vinegar and sugar. Horseradish is said to be one of the five 'bitter herbs' — with coriander, horehound, lettuce and nettle — which Jews were required to eat during Passover.

So are we not a bit unadventurous in limiting ourselves, by and large, to horseradish with roast beef? I'm not sure that I am quite ready yet to have horseradish sauce with Dover sole, but the indispensable Elizabeth David recommends Escoffier's version of it with cold sea-trout. The sauce, which he was first given with a fresh-water fish after a shooting party in the Haute Savoie, consisted of grated horseradish mixed with skinned and chopped walnuts, to which was added sugar, salt, lemon-juice and cream. (He then had scrambled eggs with cheese and white truffles, followed by hare, partridge, capercaillie and foie gras.)

I have been trying out Escoffier's sauce with simply poached sausages (Lincolnshire, though Toulouse might be more suitable), and can report that it is quite delicious. Once again, the important thing is to use fresh horseradish and not to add vinegar. I know that vinegar is used supposedly as a stabilising agent, but it is unnecessary when the sauce you make yourself will be finished within a couple of days, and anyway it spoils the flavour. If you want a milder sauce, add more cream, or sour cream or mayonnaise and perhaps some grated apple.

When, in 1942, Constance Spry published her Come into the Garden, Cook, and was trying to think up all sorts of ways to enliven wartime menus, she suggested adding horseradish to almost everything — rabbit, corned beef, tongue, eggs, vegetable fritters. One of her best ideas, well worth following again today, was to put some grated horseradish into bread sauce. It would certainly sharpen up a bland capon.