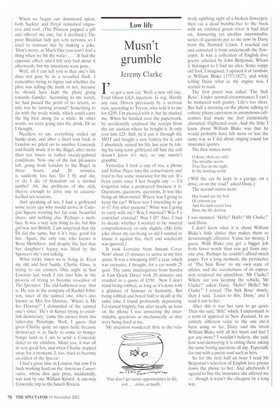 Iye got a new car. Well, a new old one. Ford Orion GLS injection. G reg. Hardly any rust. Driven previously by a nervous nun, according to Trevor, who sold it to me for £250. I'm pleased with it, but he shafted me. When he handed over the paperwork, he accidentally enclosed the receipt from the car auction where he bought it. It only cost him £25. Still, he'd put it through the MOT and bought a new battery for it, and I absolutely ruined his life last year by taking his long-term girlfriend off him (he still doesn't know it's me), so one mustn't grumble.

Yesterday I took a cup of tea, a phone and Yellow Pages into the conservatory and tried to buy some insurance for the car. It's been years since I last bought any — I'd forgotten what a protracted business it is. Questions, questions, questions. It was like being on Mastermind. Where was I going to keep the car? Where was I intending to go in it? For what purpose? What was I going to carry with me? Was I married? Was I a convicted criminal? Was I ill? Also, I had to decide whether I wanted to be insured comprehensively or only slightly. (My little joke about my car being so old I wanted to insure it against fire, theft and witchcraft was ignored.)

It took Lorraine from Instant Cover Now! about 15 minutes to arrive at my first quote. It was a whopping £697 a year, which was excessive, I thought, for a car worth 25 quid. The same interrogation from Sandra at Fast Quick Direct took 20 minutes and resulted in a quote of £550. Now I don't mind being robbed, as long as it's done with a glimmer of humour or humanity. But being robbed and bored half to death at the same time I found profoundly depressing. I'd started brightly, but after nearly an hour on the phone I was answering the interminable questions as mechanically as they were being fired at roe.

My attention wandered: first to the rela tively uplifting sight of a broken flowerpot, then via a dead bumble-bee to the book with an etiolated green cover it had died on. Answering yet another interminable series of questions put to me now by Daisy from the Norwich Union, I reached out and extracted it from underneath the flowerpot. It was a collection of English love poetry selected by John Betjeman. Whom it belonged to I had no idea, Some soppy old fool, I imagined. I opened it at random, at William Blake (1757-1827), and while telling Daisy what cc my engine was, I started to read.

The first poem was called 'The Sick Rose'. Under normal circumstances I can't be bothered with poetry. Life's too short. But half a morning on the phone talking to robotic phone operators in anonymous callcentres had made me feel existentially alienated, frightened even. And the little I knew about William Blake was that he would probably have felt more or less the same way as I did about ringing round for insurance quotes.

0 Rose, thou are sick! The invisible worm That flies in the night In the howling storm

(Will the car be kept in a garage, on a drive, or on the road?' asked Daisy.) The second stanza went:

Has found out thy bed Of crimson joy And his dark secret love Does thy life destroy.

I don't know what it is about William Blake's little ditties that makes them so devastatingly effective. Value for money, I guess. With Blake you get a bigger jolt from fewer words than you get from anyone else. Perhaps he couldn't afford much paper. For a long moment, the pertinence of 'The Sick Rose' to my own state of affairs, and the succinctness of its expression rendered me speechless. 'Mr Clarke? Where are you keeping the vehicle, Mr Clarke?' asked Daisy. 'Hello? Hello? Mr Clarke?' I reread 'The Sick Rose' slowly, then I said, 'Listen to this, Daisy,' and I read it out to her.

After this it was her turn to go quiet. Then she said, 'Shit!' which, I understand, is a term of approval in New Zealand. In an entirely different voice to the one she'd been using so far, Daisy said she loved William Blake with all her heart and had I got any more? I wouldn't believe, she said, how soul-destroying it is sitting there asking the same boring questions all day. Especially for one with a poetic soul such as hers.

So for the next half an hour I read Mr Betjeman's selection of English love poems down the phone to her. And afterwards I agreed to buy the insurance she offered me — though it wasn't the cheapest by a long way.