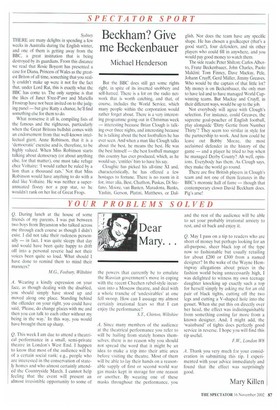 Beckham? Give me Beckenbauer

Sydney THERE are many delights in spending a few weeks in Australia during the English winter, and one of them is getting away from the BBC, a great institution that is being destroyed by its guardians. From this distance we read that Rosie Boycott has presented a case for Diana, Princess of Wales as the greatest Briton of all time, something that you really couldn't make up were it not for the fact that, under Lord Rat, this is exactly what the BBC has come to. The only surprise is that the likes of Janet S'ree-P'awr and Mariella Frostrup have not been invited on to the judging panel — but give Ratty a chance, he'll find something else for them to do.

What nonsense it all is, compiling lists of the famous and the righteous, particularly when the Great Britons bullshit comes with an endorsement from that well-known intellectual giant, Anne Robinson, that it is a 'democratic' exercise and is, therefore, to be highly valued. When Miss Robinson starts talking about democracy (or about anything else, for that matter), one must take refuge chez Voltaire: 'I would rather be ruled by a lion than a thousand rats.' Not that Miss Robinson would have anything to do with a dud like Voltaire. He was neither a superannuated floozy nor a pop star, so he wouldn't rank on her list of Great Frogs. But the BBC does still get some rights right, in spite of its inverted snobbery and self-hatred. There is a lot on the radio network that is worth catching, and that, of course, includes the World Service, which many people within the corporation would rather forget about. There is a very interesting programme going out in Christmas week — interesting because Brian Clough is talking over three nights, and interesting because he is talking about the best footballers he has ever seen. And when a man like Clough talks about the best, he means the best. He was the best himself— the best football manager this country has ever produced, which, as he would say, 'entitles' him to have his say.

Cloughie has picked his all-time XI and, characteristically, he has offered a few hostages to fortune. There is no room in it for, inter alia. Best, Charlton, Puskas, Di Stefano, Moore, van Basten, Maradona, Banks, Yashin, Gerson, Platini, Matthews, or Dal glish. Nor does the team have any specific shape. He has chosen a goalkeeper (that's a good start!), four defenders, and six other players who could fill in anywhere, and you would pay good money to watch them.

The side reads: Peter Shilton; Carlos Alberto, Franz Beckenbauer, John Charles, Paolo Maldini; Tom Finney, Dave Mackay, Pele, Johann Cruyff, Gerd Miller, Jimmy Greaves. Who would be the captain of that little lot? My money is on Beckenbauer, the only man to have led and to have managed World Cupwinning teams. But Mackay and Cruyff, in their different ways, would be up to the job.

Not everybody will agree with Cough's selection. For instance, could Greaves, the supreme goal-poacher of English football, play alongside 'Dirty Gertie from Number Thirty'? They seem too similar in style for the partnership to work. And how could he leave out Bobby Moore, the most acclaimed defender in the history of the game — and a player he tried to buy when he managed Derby County? Ah well, opinions. Everybody has them. As Clough says, they make the world go round.

There are five British players in Clough's team and not one of them features in the BBC's moronic hall of fame — though that contemporary clown David Beckham does. Pig's arse!