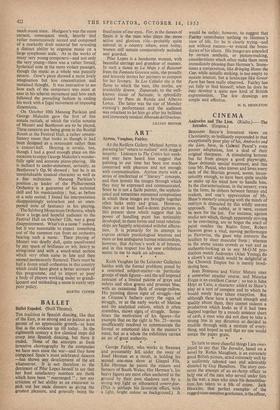 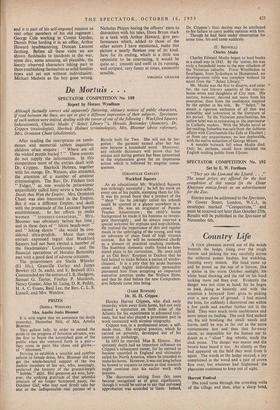 BERNARD SHAW'S irreverent views on Christianity, so brilliantly expounded in that exceptionally poor play of his, Androcles and the Lion, have, in Gabriel Pascal's even poorer adaptation, lost a deal of their original sharpness. A stimulating lecturer but far from always a good playwright, Shaw demands special treatment, and this time Mr. Pascal, who knows and loves every inch of the Shavian ground, seems, incon- ceivably enough, to have been quite unable to make up his mind how to handle him. In the characterisations, in the scenery, even in the lions, he dithers between fantasy and realism, and one's appreciation of Mr. Shaw's masterly conjuring with the minds of martyrs is distracted by this wildly uneven approach. The rabbit, as it were, cannot be seen for the hat. For instance, against studio sets which, though apparently striving to be convincing, are so bogus the smell of paint reaches the Rialto foyer, Robert Newton gives a vital, moving performance as Ferrovius, the giant who converts the heathen by sheer muscular force ; whereas in the arena scenes crowds as vast and as authentic-looking as in any M-G-M pro- duction watch Androcles (Alan Young). do a clown's act which would 'be delightful at the Chiswick Empire but is merely bewil- dering here.

Jean Simmons and Victor Mature steer a somewhat steadier course, and Maurice Evans is an excellent Caesar ; so too is John Hoyt as Cato, a character added to Shaw's play as a sort of compere and to which he would surely have taken exception. But although these have a certain strength and quality about them, they cannot redeem a production which looks as if it had been slapped together by a moody amateur short of cash, a man who did not dare to take a strong line in any direction so decided to muddle through with a mixture of every- thing, and hoped as well that no one would notice the paper grass.

To turn to more cheerful things I am over- joyed to say that The Intruder, based on a novel by Robin Maugham, is an extremely good British picture, acted extremely well by a uniformly talented cast and admirably directed by Guy Hamilton. The story con- cerns the attempt of an ex-Army officer to help one of the men who served under him in the war, a man who since his demobilisa- tion has taken to a life of crime. Jack Hawkins, that perfect exemplar of the rugged-cum-sensitive gentleman, is the officer,

and it is part of his self-imposed mission to visit other members of his old regiment : George Cole working in Covent Garden, Dennis Price lording it in an office, Arthur Howard headmastering, Duncan Lamont farming. before all these visits we are shown flashbacks to incidents in the war, some dire, some amusing, all plausible, the keenly observed characters taking part in them establishing themselves as solid familiar types and yet not without individuality. Michael Medwin as the boy gone wrong,

Nicholas Phipps boring the officers' mess to distraction with his tales, Dora Bryan stuck in a tank with Arthur Howard, give per- formances which, added to those of the other actors I have mentioned, make this picture a nearly flawless one of its kind. Save for its ending, which is a little too optimistic to be convincing, it would be quite so ; smooth and swift in its running, well scripted, very funny at times, eminently sensible.