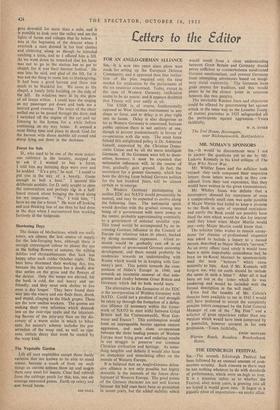 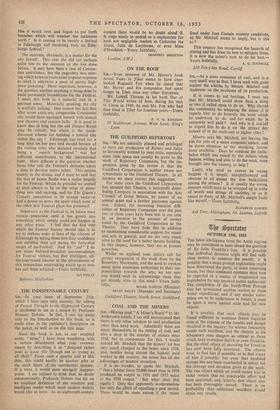 THE EDINBURGH FESTIVAL SIR,—The seventh Edinburgh Festival has been followed

by an unusual amount of post- mortem scrutiny. Such concern as there may be has nothing whatever to do with standards of performance, which were as.high as ever. It is a question rather as to whether the Festival, after seven years, is growing into all we hoped it would grow into. It began as a gigantic piece of importation—an exotic affair.

Has it struck root and begun to put forth branches which will weather the inclement north ? Is it ceasing to be merely a festival in Edinburgh and becoming truly an Edin- burgh festival ?

The outcome, obviously, is a matter for the city herself. This year she did not perhaps quite rise to the occasion as she has done before. It may have been a case of Corona- tion anti-climax, but the pageantry was miss- ing which helps to rouse some popular response to what is otherwise a piece of purely high- brow junketing. More important, however, is the question whether anything is being done to build permanent foundations for the Festival. I mean this both in a material and in a spiritual sense. Materially speaking, the city is woefully lacking. One cannot but feel that after seven years any comparable Continental city would have equipped herself with several new theatres and cbncert halls. It is good to know that at long last the old Theatre Royal may be rebuilt; but where is the much- discussed scheme for building a festival city within the city ? Edinburgh has lived for a long time on her past and should beware of the visiting critic who declared unwisely that being a " superb background " was her sufficient contribution to the international feast. More difficult is the question whether those who rule the Festival's destinies admit a duty to develop native talent. This applies mainly to the drama, and it must be said that the loss of James Bridie was a major tragedy for the Festival. Whilst he presided we seemed at least always to be on the verge of some- thing new and exciting, and his The Queen's Comedy somewhere in its strange make-up had a power to move the spirit which none of the other new Festival plays has possessed.

Impressive as the Festival is, its future must remain precarious until it has grown into something which simply could not happen in any other place. I feel that the first step which the Festival Society should take is to try to enthuse some at least of the citizens of Edinburgh by taking them into their confidence and enlisting their aid during the forty-nine weeks of no-Festival. And by "„aid " I do not mean bed-and-breakfast accommodation for Festival visitors, but that intelligent, all- the-year-round interest in the development of this tremendous undertaking which up to now has not been solicited.—Yours faithfully,