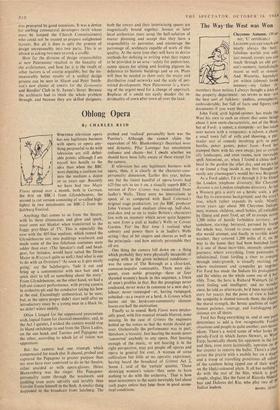 The Way the West was Won

Cheyenne Autumn. (War- John Ford, arch legend-spinner, has made the West his own to such an extent that some things about it now seem characteristic, not of the West, but of Ford : a sunset, a stampede--art has taken over nature with a vengeance; a saloon, a chase, a small town full of yells and shooting, a par' ticular sort of comedy involving girls in puce bustles, poker games, poker faces --Ford has stamped them with his own image, just as certain city landscapes, and even rooms, now inevitablY spell Antonioni, or, when I found a china doll's head in the garden the other day, and on picking it up found a frog inside it, my first thought (as surely any cinemagoer's would be) was Bergman' As a Ford addict, I'd sit through it if he filmed the London telephone directory; gut Cheyennt Autumn is no London telephone directory. At last a Western gets a story on a heroic scale, a plot that fits its enormous background; and the story's true, which rather expands its scale. Ninety' seven years ago about 300 Cheyenne Indians, men, women, children, small babies, all enfeebled by illness and poor food, set off to escape across 1,500 miles of hostile forbidden territorY; and somehow, starving, betrayed, pursued by trooPs the whole way, forced to cross country no one else would attempt, and finally in terrible Winter weather, they covered 1,200 miles of it, on the way to the home they had been banished ;fro'l• It is one of those incredible, intensely cinqmatir journeys, where everything, from panorarnic 10 infinitesimal, from fording a river to crdePil through undergrowth, is visually exciting, an where excitement and sympathy go to i the(' For Ford has made the Indians his protag !lists' and the whites on the whole come out of it lin!' ribly. True, the hero is Richard Widmark it hd most feeling and intelligent; and no wonder' since, he told _us afterwards, he'd been nursing the story for years); but the point of view is Indian the sympathy is slanted towards them, the dignitj' the moral strength, the heroic qualities of super' human patience, courage, and footslogging Per' sistence are all theirs. Ford has flung everything in, and at one poll!! determines to add a few recognisable Fordis° situations and people in quite another, anti-heroic; idiom. There's a weird scene of what looks Itir parody-Ford in which James Stewart, as WYi3I1 Earp, laconically shoots his opponent in the fnd and then, even more laconically, operates oin the bar counter to remove the bullet. There's a 1105e, across the prairie with a mobile bar on a agr! and a troop of travelling prostitutes all colour: of the rainbow being tipped out of their on the khaki-coloured plain. It all has nothing tv do with the rest of the film, which is graVf' simple, elegiac, like the faces of Ricardo Montfe ban and Dolores del Rio, who play two of wf