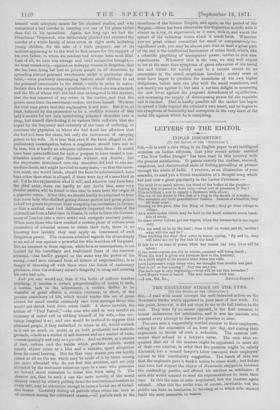 [To MK EDITOR OF TUX " SPECTATOR:]

criticism on Indian subjects, that your recent article entitled "The New Indian Danger" has been read in this country with the greatest satisfaction. It paints exactly the restless, alarmed, suspicious, and discontented state of feeling prevailing at present through the whole of India. I venture, as an illustration of your

remarks, to send you a literal translation of a Bengali song which has just now a great popularity in the Lower Provinces :-

The fruit of so much labour, the blood of the bodies of the people—. Taking this to preserve their rule—what sort of greatness is this ? This is killing a cow to supply a Brahmin with shoes ; The cry of the Ryas is like that of a frog in the mouth of a snake.

The assessors are their grandfathers' fathers. Instead of a handful, they fill their arms ; Coming on the poor, like the Zing of Death ; they go from village to village.

As a water-melon which may be hold in the hand, contains seven hand- fuls of seeds,

So these clover fellows got ton rupees, when the income-tax is one rupee only.

The tax used to be on the land ; then it fell on water, and oh, mother Is what will the end be ?

Thus thinking the wind flew away in terror, saying, "By and by, they will seize me too by the hair of the head."

If this be so in time of peace, when war comes our very lives will be

taken ; If the watercourses are dry in winter, summer will bring death ; When the word is given our fortunes flow to the treasury, As a child might to its nurse's arms when she calls.

Lord Lawrence's reign being over, we thought that trouble was past.

Past is it? or but coming ? Any one may see, The dark age is only beginning,—what will be our fate hereafter? Lord Mayo's voice is heard. The soul trembles with fear.