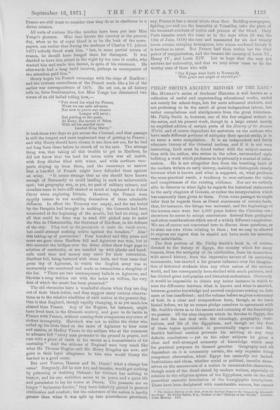 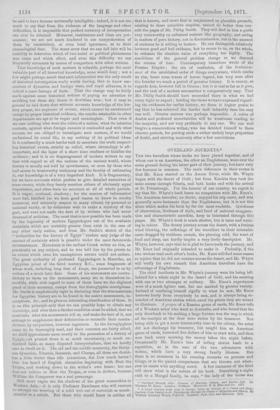 of Students' Histories is well known as a collection of useful and unpretending educational works, useful not merely for school-boys, but for more advanced students, and not professing to be the result of great independent labour, but rather compilations and abridgments from the great historians. Mr. Philip Smith is, however, one of the few original writers in the series, and his present work, though to a largo extent merely an amplified edition of certain parts of his History of the Ancient World, and of course dependent for materials on the authors who have made different portions of antiquity their special study, is in no sense a mere compilation. It is an independent and fairly adequate history of the Oriental nations, and if it is not very interesting, fault must be found rather with the subject-matter than with the author, who writes in the sober, unvarnished style befitting a work which professess to be primarily a manual of infor- mation. He is not altogether free from the besetting fault of the modern writers on early history, inability to distinguish clearly between what is known and what is supposed, or, what produces the same practical result, a tendency to over-estimate the value and completeness of the existing evidence. Nor are we entirely able to discover in what light he regards the historical statements in the early chapters of Genesis, or rather the interpretation which has commonly been given to them. From some passages we might infer that he regards them as literal statements of certain facts, that, for instance, the deluge was universal, and the beginnings of the human race were but 4,000 years before the Christian era ; elsewhere he seems to accept conclusions derived from geological and other considerations which are of a widely different complexion. We are of course not concerned here to discuss these questions, or to state our own views relating to them ; but we may be allowed to express our regret that he should not have made his meaning more indubitable.

The first portion of Mr. Philip Smith's book is, of course, devoted to the history of Egypt, the country which for many reasons, from the antiquity of its civilization, from its connection with sacred history, from the impressive nature of its surviving monuments, has exerted a far greater influence over the imagina- tion of historical studeuts than any other nation of the ancient world, and has consequently been studied with much patience, and has elicited great antiquarian and historical enthusiasm. Obviously it would be impossible to obtain any better instance in which to note the difference between What is known and what is asserted, between genuine knowledge and avowed conjecture resting on data more or less insufficient ; and the volume before us gives a summary of both in a clear and compendious form, though, as we have hinted before, we by no means pledge ourselves to agreement with Mr. Smith's views as to the amount and certainty of the knowledge we possess. Of the nine chapters which he devotes to Egypt, the first and the last deal with the ethnology, geography, insti- tutions, and life of the Egyptians, and though on the first of these topics speculation is proverbially vague — and Mr. Smith's habitual caution prevents his arriving at any very definite conclusions — yet on the other subjects he gives a clear and well-arranged summary of knowledge which may for practical purposes be deemed genuine. Geography and all dependent on it is necessarily certain, the only requisite being competent observation, which Egypt has assuredly not lacked. Institutions and ideas, whether social or political, inscribe them- selves on the monuments of a nation in unmistakable characters, though much of the detail stated by modern writers, especially in relation to the religious system of the Egyptians, rests on the still somewhat unstable foundation of the hieroglyphic inscriptions. These have been deciphered with considerable success, but cannot * The AIEGient History of the East, front ihe Earliest Times to the r,onauest se Alexander the Greet, By Phtlip Smith, B.A., Author or the " Lustory or the World." London : Joho Murray. MI.

be said to have become universally intelligible ; indeed, it is not too much to say that from the rudeness of the language and other difficulties, it is impossible that perfect certainty of interpretation can ever be attained. Moreover, institutions and ideas are per- manent; we are not much hindered in our comprehension of them by uncertainty, or even total ignorance, as to their chronological date. The worst error that we can fall into will be inability to determine which of two social or political phenomena was cause and which effect, and even this difficulty we can frequently surmount by means of comparison with other nations.

That knowledge of such matters is valuable, perhaps the most valuable part of all historical knowledge, none would deny ; not a few might perhaps assert that such information was the only result of historical investigation really worth having, that to know suc- cessions of dynasties, and foreign wars, and royal alliances, is to collect a mere farrago of facts. That the charge may be fairly made against some historical writers of paying no attention to anything but these dry bones is doubtless true ; but it may in general be laid down that without accurate knowledge of the his- tory proper, the sequence of events, which cannot be ascertained except by proper historical evidence, the results attainable in other departments are apt to be vague and meaningless. Thus even if we care nothing who were the rulers of a nation, what its intestine coutests, against what foreign enemies it contended and with what success, we are obliged to investigate such matters, if we would understand its social life, to say nothing of its political ideas. It is confessedly a much harder task to ascertain the truth respect- ing historical events, strictly so called, where chronology is all- important, and the lapse of a short time confuses or falsifies the evidence ; and it is no disparagement of modern writers to say that with regard to all the nations of the ancient world, whose history is usually not told by eyewitnesses, or even by those who had access to trustworthy testimony and the faculty of estimating it, our knowledge is of a very imperfect kind. It is fragmentary, for we have accounts which profess to give detailed narratives of some events, while they barely mention others of obviously equal importance, and often have no accounta at all of whole periods. It is vague, confused, shadowy ; for the sources of information were bad, falsified (as we have good reason to know in sundry instances, and naturally suspect in many others) by personal or national vanity, or by deliberate wish to make a mystery of the past, and were not made the best of by writers who had never dreamed of criticism. The most that is now possible has been made by the ingenuity of modern Egyptologers out of the available materials, which are certainly greater than exist in the case of auy other early nation, and from Mr. Smith's sketch of the "authorities for the history of Egypt,, readers may judge of the amount of certainty which is possible under the most favourable circumstances. Herodotus is the earliest Greek writer on this, as practically on any subject, and he was told lies by the priests to an extent which even his unsuspicious nature could not endure. The great authority of professed Egyptologers is Manetho, an Egyptian priest of the third century B.C., some fragments of whose work, including long lists of kings, are preserved to us by writers of a much later date. Some of his statements are contra- dictory to those on the monuments, many are in themselves in- credible, while with regard to none of them have we the slightest proof of their accuracy, except from the hieroglyphic inscriptions. Mr. Smith is emphatically right in declaring that the true materials for Egyptian history are to he found in the native monuments, in- scriptions, &c., and he gives an interesting classification of them. It is on this principle only that we can possibly hope to obtain any knowledge, and even then a further condition must be added, that we must take what the monuments tell us, and make the best of it, not attempt to supplement their deficiencies or reconcile their contra- dictions by conjectures, however ingenious. As the hieroglyphics conic to be thoroughly read, and their contents are fairly sifted, we shall approximate more nearly to the possession of a history of Egypt,—at present there is so much uncertainty, so much un- doubted fable, so many disputed interpretations, that we hardly care to dwell on it. The old and the middle monarchy, the thirty- one dynasties, Nitocris, Sesostris, and Cheops, all these are doubt- less a little better than idle inveutions, but how much better ? One has heard of English chronicles beginning with Brut the Trojan, and working down to the writer's own times ; but one does not believe in Brut the Trojan, or even in Arthur, because William the Conqueror was a real personage.

Still more vague are the shadows of the great monarchies in Western Asia,—it is only Professor Rawlinaon who will venture to attempt the weaving of a solid web out of materials as unsub- stantial as a nebula. But those who would know in outline all that is known, and more that is conjectured on plausible grounds, relating to these primitive empires, cannot do better than con- sult the pages of Mr. Philip Smith. They will find in him a guide very trustworthy on collateral matters like geography, and erring in matters of pure history; not in discrimination, but in the amount of credence he is willing to bestow. He can distinguish relatively between good and bad evidence, but he seems to us, on the whole, to estimate the absolute value of everything too highly. The conditions of the general problem change as we descend the stream of time. Contemporary historians wrote of the Persian Empire ; the era of confusion, of the bouleverse- meet of the established order of things everywhere, which marks its rise, bears some traces of heroic legend, but very soon after the founder we reach a period of genuine history. It is scanty, as regards Asia, however full in Greece ; but it is real so far as it goes, and the task of a modern summarizer is comparatively easy. That Mr. Philip Smith should have succeeded there is what we had every right to expect ; holding the views we have expressed regard- ing the evidences for earlier history, we deem it higher praise to say that he has achieved the harder task' tolerably than the easy one well. Greater success was perhaps impossible. A series of doubts and profound uncertainties will be wearisome reading to the majority, and not very profitable to any one. We can well forgive a conscientious writer, who has devoted himself to these obscure periods, for putting aside a rather unduly largo proportion of doubt, and striving anxiously after a few convictions.