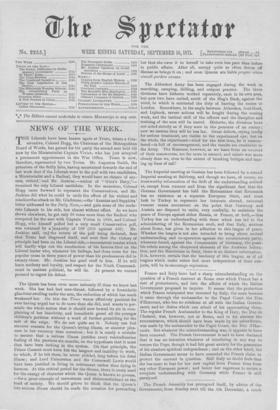 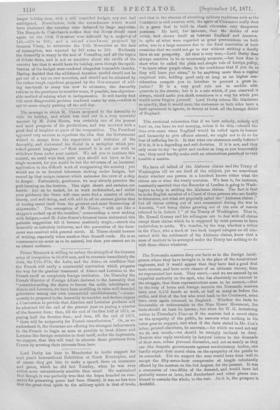 Page 1, 16 September 1871 — The French Assembly has prorogued itself, by advice of the
Close

The French Assembly has prorogued itself, by advice of the

Government, from Sunday next till the 4th December, a much

longer holiday than, with a still unsettled budget, any one had anticipated. Nevertheless, both the amendments which waild have shortened the vacation were defeated by large majorites. The Marquis de Castellano's motion that the House should mot again on the 13th IsT3vensber was defeated by a majority of 140,-378 to 233 ; eel a S13C NA amen linent, proposed by General Vinoy, to substitute the 23th November as the date

of resumption, was rejected by 367 votes to 223. Evidently the Assembly is weary to the soul of Versailles, and all the topics of debate there, and is not so sensitive about the credit of the country but that it would have its holiday, even though the equili- bration of the budget were rendered altogether impossible thereby. having decided that the additional taxation needed should not be got out of a tax on raw materials, and should not be obtained by the rather rough expedient proposed by the Government of add- ing one-tenth to every tax now in existence, the Assembly returns to the provinces to consider some, if possible, less objection- able method of raising what is indispensable. It will hardly find this most disagreeable problem rendered easier by rest,—whieh is apt to mean simply putting off the evil day.