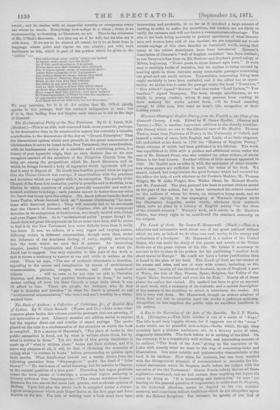 The Ecclesiastical Polity of the New Testament. By G. A.

Jacob, D.D. (Strahan.)—This is an able, well-roasonod book, more powerful, perhaps, in its destructive than in its constructive aspect, but certainly a valuable contribution to the discussions of the day on " Church Principles." That the hierarchical system which now prevails in the great communions of

Christendom is not to be found in the New Testament, that sacerdotalism, with its fundamental notion of a sacrifice and a sacrificing priest, is a theory of post-Apostolic origin, that no such distinot line as we now recognize marked off the ministers of the Primitive Church from the laity, are among the propositions which Dr. Jacob discusses, and on which he brings forward a body of argument which opponents will not find it easy to dispose of. He treads less familiar ground when he argues that the Nicene Church was corrupt, if sacerdotalism with the practices and doctrines which aro cognate with it, be corruption. The purity of the Church of the three first centuries, purity in practice and in doctrine, is an illusion in which numbers of people, generally reasonable and well in- formed, continue to indulge ; such persons cannot do bettor than soo what Dr. Jacob has to say upon the subject. (Dr. Jacob follows here the lead of Isaac. Taylor, whose learned book on " Ancient Christianity" ho men- tions with deserved praise.) They will scarcely fail to bo convineed that the Church of Iremous and of Cyprian, with all its courageous devotion in its antagonism to heathenism, was deeply tainted with Judaic and oven Pagan ideas. As to "ecclesiastical polity proper, though Dr. Jacob does not press his argument as far as some have done, still he seems to find it in the New Tat:moat hi a more definite form than it really has there. It was, we believe, of a very vague and varying nature, differing widely in different communities, though even then, under the influence of the dominant feeling of unity, rapidly developing into the form which we soon find it assume. An interesting chapter, headed "Application and Conclusion," gives us what Dr. Jacob has to suggest. Our only objection to this part of the work is that it shows a tendency to narrow at one end while it widens at the other. When he says, "The use of onthotie stimulants to devotion, appealing to the senses and imagination by means of architectural ornamentation, pictures, images, crosses, and other symbolical

objects will be seen to be not only no aids to Christian doctrine and devotion, but positive hindrances to them," be really means cutting off from his ideal Chureh a largo body which it can ill afford to lose. There are people, for instance, who do find "aid to doctrine and devotion" in what Dr. Jacob is pleased. to call "architectural ornamentation," who won't and can't worship in a white- washed barn.