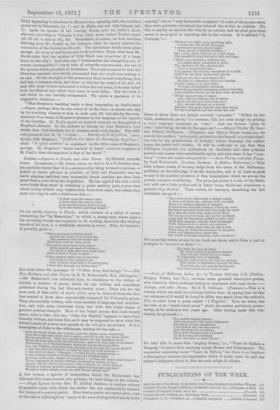 PournY.-Leparon to Payola, and other Poems. By Edward Arundel Gear°.

(Longroans.)--Mr. Goan, whom we find to be a University man, has probably learnt that it is a praiseworthy thing to insert a phrase, or indeed as many phrases as possible, of Ovid and Propertius into his Latin elegiacs, and that very suceessful Greek iambics are often little more than a cento from the tragedians. He has applied the rule a little more freely than usual in imitating a groat modern poet, a poet after whom young writers may legitimately form their style, but whom they must not copy in such a fashion as this :-

On the whole, Let aron to Payola, which coinage of a series of poems resembling the "In Memoriam," in which a young man, whose papers his surviving friends are supposed to be reading, describes the varying moods of his love, is a creditable exercise in verse. This, for instance, is passably good:-

" When gazing in a listless mood

Acrese the waste of flood and sky, The patriarch saw his tender spy Returning with an omen good.

"His spirits must have risen apace With grateful prospect of release; The hand of pain that Soon must coaso llath in itself is touch of grace " From scented paths among the stare 0 little dove, that brings to me

This blossom from hope's flowering tree,

I bless thee through my prison bars 1"

But what about the grammar of "0 little dove, that brings "?—The Two Brothers, and other Poems, by E. II. Bickersteth, M.A. (Rivington.) -Mr. Bickerstoth has collected hero, in obedience to the wishes Of friends, a number of poems which he has written and sometimes published during the last five-and-twenty years. They are, for the most part, of that order of merit which may be inferred from the fact that several of them have successfully competed for University prizes. They are carefully written, with some mastery of language and versifica- tion, and with some rhetorical force, but with but slight traces of genuine poetical thought. Most of the larger poems date back twenty years, more or less ; but one, "John the Baptist," appears to have been recently written, and from this, as it may be supposed to show what the writer's matured powers are capable of, we will give an extract. It is a description of John in the wilderness, waiting for his call ;-

" Now the lonely home was lonelier, now the silence more unmarred, Now his rough-spun dress was rougher, and his hardy fare more hard ; Yet he moved not. God, who guided Israel o'er the trackless waste, When his hour was come would call him ; and with God there is no haste. Meanwhile, of all Sacred Stories which his bosom tired and

One, the Tiehbite, more intensely through and through his bosom thrfll'd. 0 that Sacrifice on Gannet 1-0 that tire that fell from heaven

0 that nation's shout, 'Jehovah V-0 that bloody, stormy even S- O that solitary cavern i-0 that strong and dreadful wind,

Rocking earthquake, flames of vengeance 1-0 that still Knoll voice behind I Those long years of patient witness, crowned by victory a,t last; Israel's chariot, Israel's horsemen I like a dream the vision passed. Would to God tho prophet's mantle might but fall upon my welt Would to God a seraph touch me with Esaie,s' living coal:"

A few hymns, a species of composition which Mr. Blekersteth has followed with scene success, are, perhaps, the best things in the volume. —.1Vugce Lyricce, by the Rev. E. Dudley Jackson, is another volume of passable verse, with which the author has not ungracefully amused the leisure of a country parish. More hearty praise we cannot give, oven at the risk of differing from "many of the most distinguished minds in the country," whose "very favourable reception "of some of the poems when they wore privately circulated has induced the writer to publish. We like to justify an opinion like this by an extract, and we shall give what seems to us as good as anything else in the volume. It is entitled "A Contrast ":-

" Without was light, pure sparkling light,

" Within was darkness, darkness all,

No candle there presumed to born,

The shadows fell like ghostly pall Upon a monumental urn;

You groped like stealthy wanderers In a tomb, Stifled by the thick, melancholy gloom.

"Without was life -amid what a lifel

Myriads of sunbeams round you leaping, Clouds racing on in airy strife, Torrents precipitately sweeping, Birds flying, insects humming, zephyrs blowing, And gorgeous flowers in the pure other glowing.

" Within upon a truss of straw, Life-but the hideous life of death.

I stood and listened there with awe ; No; not the whisper of a breath, The Soul was gene, and the wan duet bereft, To vile corruption and the worm was left."

Some of these lines arc indeed scarcely "passable." "Stifled by the thick, melancholy gloom," for instance, will not scan except by putting a most improper emphasis on "the." And can flowers "glow In ether," ether being, we take it, the upper air?—Mental Flights. By Caro- line Giffard Phillipson. (Chapman and Hall.)-These verses are, we road in the preface, "priuoipally printed for the benefit of private chari- ties and for the gratification of friends," whose leniency, the author hopes, the public will imitate. It will be sufficient to say that Miss Phillipson expressos her enthusiasm for Garibaldi and other political persons and causes with considerable spirit, and that some of her "mor- tuary" verses are tender and graceful.—Antos Thorne, and other Poems._ By Paul Wentworth. (London: Strahan. S. Muller, Melbenrno.)-This little volume comes, if we may judge from the name of the Melbourne publisher on the title-page, from the Antipodes, and is at least as good as any of the poetical products of this hemisphere 'which we are on th, present occasion considering. The principal poem is a tale of the Baehr told with not a little pathos and in blank verse, which has sometimes a genuine ring about it. These verses, for instance, describing the lost wanderer, tire good :- " The crows above him made a dismal sound, A slow and bitter cry ; and he, with strength Born of a sudden impulse of despair, Followed the shadows painting t ward the west, But knew not east from west, nor aught he knew Save that the earth was as an oven's floor, The air an oven's breath, all heaven one flame. Long time ha wandered, racked in every limb With fiery anguish, and his mind distraught With visions such as terror and remorse Are wont to feign, what time all else is still, What time the white-heat embers in the grate Glow, and imagination, artist-like, But vexed with pain and fear, runs riot there."

But as pretty versos as any in the book are these, which form a sort of prologue to "a novel in little :"-

" His early day ran all away, He slept (6 sleep of pleasant dreams, And saw the world but RB it seems To humming-bird or butterfly. And like some flower his days he passed That sheds no fragrance, though 'Us fair ; That feels the sun, and drinks the air,

And diem and leaves no fruit at last."

Lays of Killarney Lakes, d'c., by Thomas Gallwey, A.M. (Dublin Hodges, Foster, and Co.), contains some graceful descriptive poems, with others in which national feeling is expressed with some force.— Antiope, and other Poems. By D. T. Calhoun. (Provost.)-This is a volume which we shall not criticize further than by saying that we fear our estimate of it would be found to differ very much from the author's.- This wo infer from a poem called "I Fugitivi." This, we learn, was the title of an " heroi-comia poem" which the author published, prema- turely, as he confesses, two years ago. After having made this Con- fession, he proceeds :-

Didst thou meet with equal judgment; For albeit In vain impatience I did launch thee ere thy season Into the done sea of venture, Thou dost treasure store of jewels

In their value all excelling

Since old Chios or sweet Avon!"

We take this to moan that "mighty Nunez," i.e., "Vasco do Balboa, Tragedy," is better than anything except Homer and Shakespeare. We remember something about "Vasco de Balboa," but there is so hopeless

a discrepancy between the impression which it made upon us and the author's judgment about it, that we seek refuge in silence.