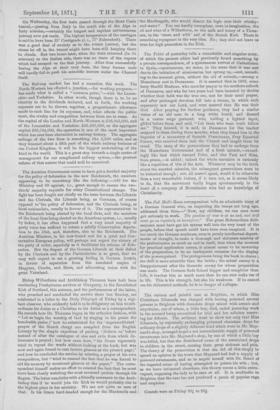 Page 3, 16 September 1871 — The Railway market has had a sensation this week. The
Close

The Railway market has had a sensation this week. The

North-Western has effected a junction,—for working purposes,— has made what is called a "common purse,"—with the Lanca- shire and Yorkshire. In other words, though there is to be no -identity in the dividends declared, and so forth, the working 'expenses are to be thrown together, a proportionate allowance made to each line for its expenses, and, what affects the public most, the rivalry and competition between them arc to cease. As 'the capital of the London and North-Western is 256,843,000, and of the Lancashire and Yorkshire /23,921,000, or the aggregate capital 280,764,000, the operation is one of the most important which has ever been chronicled in railway history. The aggregate mileage of the two lines is something like 2,000 miles, and as they transact about a fifth part of the whole railway business of the United Kingdom, it will be the biggest undertaking of the kind in the world. This is a great step towards a single centre of management for our complicated railway system,—the greatest reform of that nature that could well be conceived.