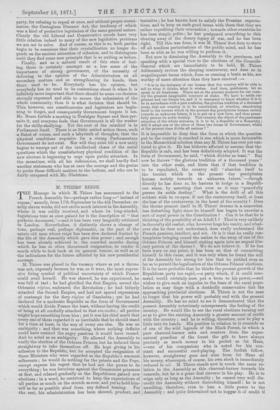 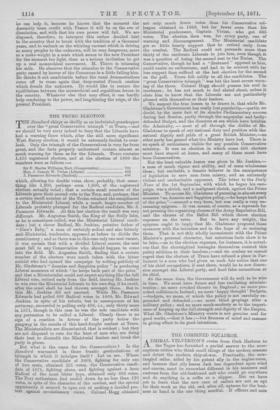 M. Thiers was placed in the vacancy where as yet a throne was not, expressly because he was, as it were, the most expres- sive living symbol of political uncertainty of which France -could avail herself. He was shrewd, he was experienced, he was full of tact ; he had glorified the first Empire, served the Orleanist rligime, embraced the Revolution ; he had bitterly -attacked the Second Empire, and had not spared expressions of contempt for the fiery regime of Gambetta ; yet he had -declared for a moderate Republic as the form of Government - which would divide France the least, without having the credit -of being at all cordially attached to that via media ; all parties might hope something from him ; yet it was his chief merit that -every one of them regarded it as inevitable that he should stand for a time at least, in the way of every one else. He was an ambiguity ; and that was something, where nothing definite could have resisted the angry passions it would have roused. And he acted as an ambiguity. He allowed the Assembly to -verify the election of the Orleans Princes, but he induced them straightway to take themselves off. He kept giving in his adhesion to the Republic, but he accepted the resignation of those Ministers who were regarded as the Republic's warmest adherents ; he would do nothing for the priests and the Pope, -except express his regret that he had not the power to do everything ; he was ferocious against the Communist prisoners at first, and relaxed gradually as the Republicans gained new -elections ; in a word, he contrived to keep the expectations of -all parties as much on the stretch as ever, and yet to hold him-

self as far as possible aloof from any defined leaning. For the rest, his administration has been shrewd, prudent, and tentative ; he has known how to satisfy the Prussian expecta- tions, and to keep on such good terms with them that they are rather expediting their evacuation ; towards other countries he has been simply polite ; he has postponed everything to this clearing away of the dreary legacy of war, and he has been right. Till this was done, it was M. Thiers' first duty to stave off all needless perturbations of the public mind, and he has been as able as he was willing to perform it.

But now in dismissing the Assembly to the provinces, and speaking with a special view to the elections of the Councils- General which are immediately to be held, M. Thiers deliberately revives the sleeping controversy, and does so in magniloquent terms which, from so cunning a brain as his, are worthy of more attention than they have received :—

" It is in the intimacy of our homes that the country will be able to tell us what it thinks, what it wishes. And then, gentlemen, let us speak in all frankness. There aro at the present moment for our coun- try the greatest imaginable interests at stake. We have to settle our present and our future lot, and it is necessary to know whether it is to be in accordance with a past tradition, the glorious tradition of a thousand years, that our country is to be constituted, or whether, abandoning itself to the torrent which in the present day precipitates human society towards an unknown future, it is to put on a new form, and thus peace- fully pursue its noble destiny. This country, the object of the passionate attention of the whole universe, is it to be a Republic or a Monarchy ; will it adopt one or the othor of these two forme of Government, which at the present time divide all nations ? "

It is impossible to deny that the form in which the question put to the country is couched is one which is more favourable to the Monarchical solution than any M. Thiers has ever yet ven- tured to give it. He has hitherto affected to assume that the Republic is safe, and has been definitively adopted. It was the form of Government, he said, "which divides us least." But now he throws "the glorious tradition of a thousand years"

into the other scale, and hints that if that tradition is to be repudiated, the country will "abandon itself to the torrent which in the present day precipitates human society towards an unknown future,"—though directly he has done so, he hastens to hedge in a Republi- can sense, by asserting that even so it may "peacefully pursue its noble destiny." What is the drift of all this evident wish to re-open, if not the controversy itself, at least the fear of the controversy, in the heart of the country ? Does the throne present itself to M. Thiers' dreams in a somewhat less disturbing light since he himself has begun to exercise a sort of royal power in the Constitution ? Can it be that he is thinking of the possibility of an Adolf 1.1 That is very unlikely in the crafty old realist, who, however huge his vanity, and what- ever else he does not understand, does really understand the French passions, intellect, and wit. Or is it that he really con- templates bringing round the nation to the sway of one of the Orleans Princes, and himself sinking again into an august lite- rary patron of the throne ? We do not believe it. If he has been wary on any point, it has boon on that of committing himself to this cause, and it was only when he found the will of the Assembly too strong for him that he yielded even so far as to permit the legalization of the Orleans Princes' elections.

It is far more probable that he thinks the present growth of the Republican party too rapid,—a party which, if it could com- mand, would certainly soon put a term to his power,—and wishes to give such an impulse to the fears of the rural popu- lation as may tinge with a decidedly conservative tint the approaching provincial elections. M. Thiers is not the man to forget that his power will probably end with the present Assembly. He has no mind to see it demonstrated that the present Assembly notoriously misrepresents the feeling of the country. He would like to see the rural elections turning out se as to give the existing Assembly a greater amount of credit with the country ; and he is willing, therefore, now to play a little into its hands. His position in relation to it reminds us of one of the wild legends of the Black Forest, in which a poor charcoal-burner asks and receives from the super- natural guardian of the forest the gift to have always precisely as much money in his pocket as fat Hans, —one of his companions who is noted for his con- stant and successful card-playing. The foolish fellow,

however, straightway goes and wins from fat IIans all his money, whereupon, of course, his own stock is immediately reduced to nil. M. Thiers stands now in much the same re- lation to the Assembly as this charcoal-burner towards his

comrade, but he is a great deal cleverer in his play. He is to reign only as long as the Assembly ; he cannot very well dis- credit the Assembly without discrediting himself ; he is not unwilling, therefore, oven to lose a little power to the Assembly ; and quite determined not to beggar it of credit if

he can help it, because he knows that the moment the Assembly loses credit with France it will be on the eve of dissolution, and with that his own power will fall. We are disposed, therefore, to interpret this rather decided hint to the country that to break with the tradition of a thousand years, and to embark on the whirling current which is driving so many peoples to the unknown, will be very dangerous, more as a make-weight in a scale which seems to the new President for the moment too light, than as a serious invitation to get up a real monarchical movement. M. Thiers is trimming his sails. He observes that the stimulus to the Conservative party caused by horror of the Commune is a little failing him. He thinks it not unadvisable before the rural demonstrations come off to rouse again that deep-seated French caution which dreads the unknown. He would like to restore the equilibrium between the monarchical and republican forces in the country. Whatever else that may effect, it can hardly help conducing to the power, and lengthening the reign, of the present President.