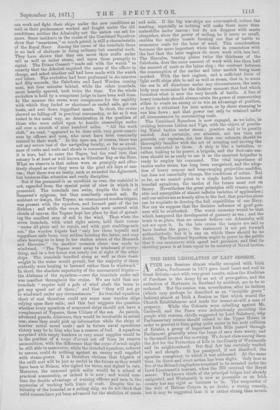 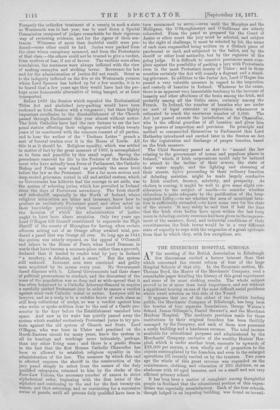 THE IRISH LEGISLATION OF LAST SESSION.

AFTER two Sessions almost wholly occupied with Irish affairs, Parliament in 1871 gave itself heart and soul to Great Britain—not with very great results, unless the Abolition of Purchase in the Army by an act of prerogative, and the extinction of Mortmain in Scotland by accident, are to be so reckoned. But the session was, nevertheless, after its fashion (which may perhaps be described as an "invisible green" fashion) almost as Irish a Session as that which erased the Church Establishment and made the tenant-at-will a man of property. While the Colonels were caballing against Mr. Cardwell, and the Peers were industriously providing the people with reasons, chiefly suggested by Lord Salisbury, why Parliamentary reform should extend to the Upper House, in order to prevent it from going quite under in the next collision of Estates, a group of important Irish Bills passed through Parliament, generally when the lungs of men were weary, and in the small hours of the morning. We do not class among them the Act for the Protection of Life in the County of Westmeath and its neighbourhood. But that Act has certainly worked well and cheaply. It has paralyzed, if not dissolved, the agrarian conspiracy, to which it was addressed. At the same time, its direct and overt action has been slight. Only four or five of the Riband ringleaders remained to be arrested under the Lord-Lieutenant's warrant, when the Bill received the Royal assent. The known chiefs of the principal lodges had already emigrated, and Westmeath is now as peaceable as an Irish county has any right or business to be. The -suspension of the writ of Habeas Corpus is, no doubt, a strong remedy, but it may be suggested that it is rather strong than severe.

The Chief Secretary passed an Act to "amend the law relating to the government of towns and populous places in Ireland," which, if Irish corporations could only be induced to attend to the incline of their sewers, the state of their water supply, and the lighting and cleansing of their streets, before proceeding to their ordinary function of debating societies, might be made largely conducive to Irish comfort, decency, salubrity, and prosperity. As cholera is coining, it might be well to give some slight con- sideration to the subject of smells—to consider whether chloralum is quite adequate to the purification of the long- neglected Liffey,—to see whether the area of municipal taxa- tion is sufficiently extended,—to have some care for the state of the streets. It may safely be said that if half the time that the Irish civic bodies have spent within the last forty years in debating-society exercises had been given to the improve- ment of the sanatory, fiscal, and industrial conditions of their constituencies, the Irish towns would be in a very different state of capacity to cope with the exigencies of a great epidemic from that in which they, with few exceptions, are.