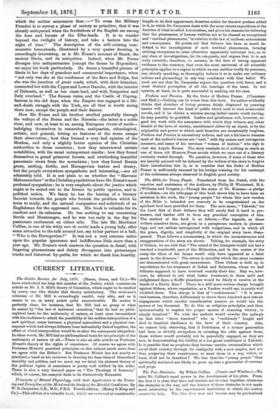 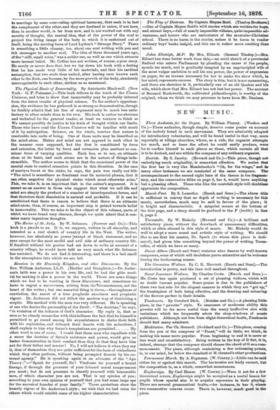 The Two Destinies. By Wilkie Collins. (Chatto and Windus.)—We miss

Mr. Collins's usual power in the development of his plots. From the first it is clear that hero and heroine are to come together, whatever the obstacles in the way, and the history of those obstacles is not made more interesting by the supernatural machinery to which the author resorts for help. The idea that man and woman may be predestined

to marriage by some over-ruling spiritual harmony, that each is in fact the complement of the other, and they are destined to union, if not here, then in another world, is far from new, and is not worked out with any novelty of thought, the central idea, that of the power of the soul to project the living image of the body in which it is enshrined out of itself, being the moving force of Lord Lytton's "Strange Story." There is something a little clumsy, too, about one soul writing with pen and ink messages to another soul. The idea of three thousand years ago, of the" still, small voice," was a nobler one, as well as one which attracts more instant belief. Mr. Collins has not written, of course, spoor story. He rarely or never does that, but we lay down his book with a feeling that he has made very little of his materials, and that his cardinal assumption, that two souls time united, after having once known each other in the flesh, can become, by the mere growth of the body, absolutely unrecognisable to each other, strikes us as unnatural.