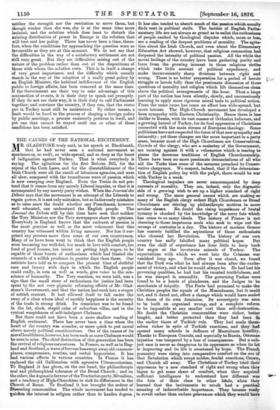 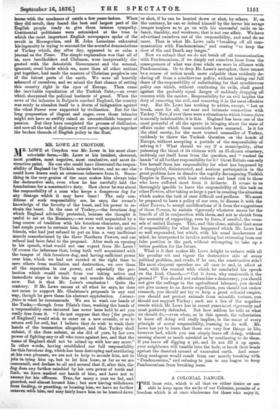 THE CAUSES OF THE NATIONAL EXCITEMENT.

Ir. GLADSTONE truly said, in his speech at B]ackheath, that he had never seen a national movement so spontaneous, so swift, so wide-spread, and so deep as the burst of indignation against Turkey. That is what everybody is saying. The agitations for the first Reform Bill, for the repeal of the Corn Laws, and for the disestablishment of the Irish Church were all the result of laborious agencies, and were all slow, compared with the tumultuous wave of passion which is now sweeping over England. Even the Tories do not pre- tend that it comes from any merely Liberal impulse, or that it is accompanied by any merely party wishes. When the Journal des Debats says that the movement is an attempt of the Liberals to regain power, it is not only mistaken, but so ludicrously mistaken as to raise anew the doubt whether any Frenchman, however well educated, can understand the English people. The Journal des Ddbats will by this time have seen that neither the Tory Ministers nor the Tory newspapers share its opinions. Everybody in England knows that the outburst of passion is the most genuine as well as the most vehement that this country has witnessed within living memory. Nor has it sur- prised any persons more than some of our own countrymen. Many of us have been wont to think that the English people were becoming too well-fed, too much in love with comfort, too fond of good houses, too intent on getting high wages, to be capable of those bursts of enthusiasm which had blasted the counsels of a selfish prudence in greater days than these. Our satirists have told us to compare the present time of slothful ease and luxury with days in which the English people could really, in acts as well as words, give voice to the con- science of humanity. The Tory reaction, we were told, was a sign that the small store of enthusiasm for justice had been spent by the not very gigantic reforming efforts of Mr. Glad- stone's Government, and that the nation had sunk into a stupor of sottish content. It had allowed itself to fall under the sway of a class whose ideal of earthly happiness is the security of the trade in strong drink. Its conscience was to be found in the fat, sleek, stupid calm of suburban villas, and in the cynical waspishness of self-indulgent Clubmen. But there could not have been a more shallow reading of English sentiment. There has never been a time when the heart of the country was sounder, or more quick to put moral above merely political considerations. One of the causes of its moral healthiness, however, has been such as mere Clubmen would be sure to miss. The chief distinction of this generation has been the revival of religious earnestness. In France, as well as in Eng- land and Scotland, a wave of fervourhasswept away old common- places, compromises, routine, and verbal hypocrisies. It has had various effects in various countries. In France it has replaced the old Gallicanism with agressive 1J1tramontanism. To England it has given, on the one hand, the philanthropic seal and philosophical tolerance of the Broad Church ; and on the other, the dogmatic fervour of the Tractarian party, Ritualism, and a tendency of High-Churchism to sink its differences in the Church of Rome. To Scotland it has brought the ardour of Dissenting communities. The whole movement has tended to snick= the interest in religion rather than to harden dogma. a It has also tended to absorb much of the passion which usually finds vent in political strife. The battles of English Parlia- mentary life are not always so grand as to enlist the enthusiasm of people excited by theological disputes which, more or less, are a reading of the deepest problems of morality. The agita- tion about the Irish Church, and even about the Elementary Education Act showed, however, that religious commotion had deepened the intensity of political passion. All the while the moral feelings of the country have been gathering purity and force from the growing interest in those religions strifes which take little amount of political expediency, and make inconveniently sharp divisions between right and wrong. There is no better preparation for a period of heroic struggle or heroic folly than the passionate discussion of those questions of morality and religion which lift themselves clean above the political arrangements of the hour. Thus a large part of the nation has been silently, slowly, and unconsciously learning to apply more rigorous moral tests to political action. From the same cause has come an effect less wide-spread, but more intense. The High-Church movement has developed a keen sympathy with Eastern Christianity. Hence there is less dislike to Russia, with its vast masses of Orthodox believers, and a growing hatred of Turkey, for its foul oppression of Christians connected with the main stream of European theology. Some- politicians have not suspected the force of that new sympathy and animosity ; yet these changes are the more important in a party sense, because most of the High Churchmen are Conservatives.. Crowds of the clergy, who are a mainstay of the Government, are turning against it with a vehemence which is tearing to- pieces the decorous traditions of English Churchinanehip. There have been no more passionate denunciations of all who- aid the Turks than some of the sermons preached by Conser- vative clergymen. We suspect, indeed, that if the determina- tion of English policy lay with the pulpit, there-would be war with Turkey in a week.

Theological impulses are never unaccompanied by deep currents of morality. They are, indeed, only the dogmatic side of a growing wish to set up a higher standard of right and wrong. The same general causes which are making so many of the English clergy ardent High Churchmen or Broad Churchmen are stirring up philanthropic motives in more secular classes. No doubt the rising impatience of brutal tyranny is checked by the knowledge of the sorry fate which has come to so many ideals. The history of France is not cheering to those impetuous souls who seek to wipe out the wrongs of centuries in a day. The history of modern Greece has scarcely fulfilled the aspirations of those enthusiasts who cheered her Revolution. The history of our own country has sadly falsified many political hopes. But even the chill of experience has done little to keep back the anger at the inveterate misrule of Turkey. The- expectations with which we went into the Crimean war

vanished long ago. Soon after it was closed, we found that the Turk was what he had always been after the excite- ment of victory, and what he would always be. He had lost his governing qualities, he had lost his vaunted truthfulness, and he was steeped in sensuality. The governing Pashas were found to be a horde of plunderers and the Judges to be merchants of iniquity. The Porte 'had promised to make the Christian peoples the equals of the Mussulmans, but it could not, and it dared not, effect a change which would have sealed the doom of its own dominion. Its sovereignty was seen to be built on organised wrong, and a complete reform to be impossible at any smaller cost than self-destruction. No doubt the Christian communities were richer, better taught, and better protected than they had been in the earlier times of Turkish rule. They had made them- selves richer in spite of Turkish exactions, and they had opened many schools in defiance of Mussulman hostility. Thanks to European Consuls, and especially to Russia, Ottoman injustice was tempered by a fear of consequences. But a sub- ject race is never so dangerous to its oppressors as when its lot is improving and its life is sweetened by hope. The French peasantry were rising into comparative comfort on the eve of that Revolution which swept nobles, feudal exactions, Crown,. and Church all away. The Christians of Turkey tried their oppressors by a new standard of right and wrong when they began to get some share of comfort, when they acquired sufficient intelligence to understand how different was the fate of their class in other binds, when they learned that the incitements to revolt had a practical meaning of indescribable importance. They became ready to revolt rather than endure grievances which they would have

borne with the meekness of cattle a few years before. When they did revolt, they found the best and largest part of the English people ready to give them intense sympathy. Continental politicians were astonished at the tone in which the most important English newspapers spoke of the revolt in Herzegovina, and M. John Lemoinne exhausted his ingenuity in trying to account for the scornful denunciations of Turkey which, day after day, appeared in so calm a journal as the Times. The simple explanation was that all of us, save bondholders and Clubmen, were inexpressibly dis- gusted with the detestable Government and the sensual, ignorant, cruel horde which we, more than all other nations put together, had made the masters of Christian peoples in one of the fairest parts of the earth. We were all heartily ashamed of ourselves, and we seized the first chance of setting this country right in the eyes of Europe. Then came the inevitable repudiation of the Turkish Debt,—an event which sharpened the political instincts of greed. When the news of the infamies in Bulgaria reached England, the country was ready to abandon itself to a storm of indignation against the vilest Power ever supported by civilisation. But for the long preparation of disgust and anger, even those infamies might not have so swiftly raised an uncontrollable tempest of passion. But they have completed the process of disillusion, and now all the tact of diplomacy will never again piece together the broken threads of English policy in the East.