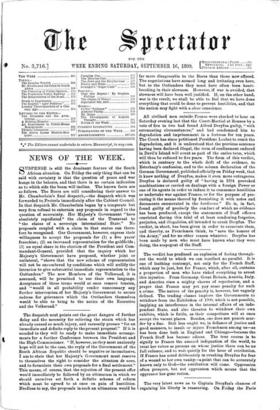 Page 1, 16 September 1899 — The despatch next points out the great dangers of farther
Close

The despatch next points out the great dangers of farther

delay and the necessity for relieving the strain which has already caused so much injury, and earnestly presses "for an immediate and definite reply to the present proposal." If it is acceded to they will be ready to make immediate arrange- ments for a further Conference between the President and the High Commissioner. " If, however, as they most anxiously hope will not be the case, the reply of the Government of the South African Republic should be negative or inconclusive, I am to state that her Majesty's Government must reserve to themselves the right to consider the situation de novo, and to formulate their own proposals for a final settlement." This means, of course, that the rejection of the present offer would immediately be followed by an ultimatum in which we should ourselves set forth a definite scheme of reform which must be agreed to at once on pain of hostilities. Needless to say, the proposals in such an ultimatum would be far more disagreeable to the Boers than those now offered. The negotiations have seemed long and irritating even here, but to the Outlanders they must have often been heart- breaking in their slowness. However, if war is avoided, that slowness will have been well justified. If, on the other hand, war is the result, we shall be able to feel that we have done everything that could be done to prevent hostilities, and that the nation may fight with a clear conscience.