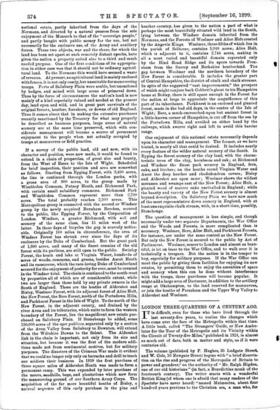 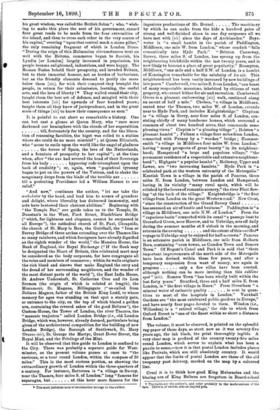 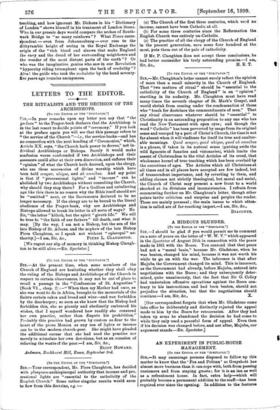 LONDON THREE-QUARTERS OF A CENTURY AGO.

IT is difficult, even for those who have lived through the last seventy-five years, to realise the changes which have come over the face of the Metropolis within that time. A little book, called "The Strangers' Guide, or New Ambu- lator for the Tour of the Metropolis and its Vicinity within the Circuit of Twenty-five Miles," published in 1824, is almost as much out of date, both in matter and style, as if it were centuries old.

The volume (published by F. Hughes, 35 Ludgate Street, and W. Cole, 10 Newgate Street) begins with "a brief disserta- tion on the rise and progress of the Metropolis of Britain to power and grandeur," on the authority of " Mr. Ralph Higden, one of our old historians " (in fact, a Benedictine monk of the fourteenth century). The writer starts with a wonderful British King (of whom one is afraid that many readers of the Spectator have never heard) "named Mulmucius, about four hundred years previous to the Christian era, a man who, for

his great wisdom, was called the British Solon"; who, " wish- ing to make this place the seat of his government, caused four great roads to be made from the four extremities of the island, and then to cross each other in the very centre of his capital," erecting " upon that central mark a stone pillar," the only remaining fragment of which is London Stone. "During the reign of this Mulmucius circumstances went on well with the Britons, commerce began to flourish, his Lyndin [or London] largely increased in population, his people became enlightened, industrious, and were happy. The Roman States beheld their prosperity, and invaded Britain, but to their immortal honour, not as hordes of barbarians, but as the friendly elements descend to purify the mass below them [sic], for with their conquest they brought the people, in return for their submission, learning, the useful arts, and the love of liberty !* They walled round their city, taught them the best art of defence, and mingled with their best interests [sic] for upwards of four hundred years ; taught them all they knew of jurisprudence, and in the great scale of things [sic] to know their consequence as men."

It is painful to cut short so remarkable a history. One can but cast a glance at Queen Mary, who " once more darkened our hemisphere with the clouds of her superstition

till, fortunately for the country, and for the libera- tion of reasoning faculties, the bigot was called to a station where she could do no more mischief" ; at Queen Elizabeth, who " arose to smile upon the world like the angel of gladness

the terror of Spain, the love of the Netherlands, and a fountain of prosperity to her capital"; at the time when, after "the axe had severed the head of their Sovereign from his body hypocrisy rode triumphant upon the back of credulity "; or, again, when " papistical tyranny began to put on the powers of the Vatican, and to shake the sanguinary drops from the blade of the terrible axe till a protecting Providence led a William Nassau to our relief."

"And now," continues the author, " let me take the ambulator by the hand, and lead him to scenes of grandeur and delight, where liberality has disbursed immensity, and arts have bestowed their choicest abilities." Beginning with "the Temple Bar," our guide takes us to the Temple, St. Dunstan's in the West, Fleet Street, Blackfriars Bridge (" which, for lightness and elegance, cannot be surpassed in all Europe"), the cathedral church of St. Paul, Cheapside, the church of St. Mary le Bow, the Guildhall, the "Iron or Surrey Bridge of three arches extending over the Thames like so many rainbows, and which foreigners have already dignified as the eighth wonder of the world," the Mansion House, the Bank of England, the Royal Exchange (" If the Bank may be designated the Heart of Britain, this celebrated mart may be considered as the body corporate, for here congregate all the veins and members of commerce ; within its walls originate the rich blood and sinews that make England the envy and the dread of her surrounding neighbours, and the wonder of the most distant parts of the world "), the East India House, St. Andrew Undershaft, St. Catherine Cree and its Lion Sermon (the origin of which is related at length), the Monument, St. Magnus, Billingsgate (" so-called from Belinus Magnus, father of the British King Ludd, to whose memory for ages was standing on that spot a stately gate, or entrance to the city, on the top of which blazed a golden urn, containing the revered ashes of the good Belinus "), the Custom-House, the Tower of London, the river Thames, the "masonic trajectus " called London Bridge (i.e., old London Bridge, which was, however, already doomed, particulars being given of the architectural competition for the building of new London Bridge), the Borough of Southwark, St. Mary Overee (sic), St. George the Martyr, Great Dover Street, the Royal Mint, and the Privilege of the Mint.

It will be observed that this guide to London is confined to the City. There was probably a separate guide for West- minster, as the present volume passes at once to "the environs, or a tour round London, within the compass of 30 miles." This is the most curious portion, as showing the extraordinary growth of London within the three-quarters of a century. For instance, Battersea is "a village in Surrey, near the Thames, four miles S. of London," long "famous for asparagus, but at this hour more famous for the

• This most Judicious note of exclamation belongs to the author.

ingenious productions of Mr. Brunel The machinery by which he can make from the hide a hundred pairs of

strong and well-finished shoes in one day surpasses all we have met with [sic] since the days of Archimedes." Bays- water is "a small hamlet in the parish of Paddington, Middlesex, one mile W. from London," whose conduit falls

romantically into Hyde Park." " Brixton Causeway, Surrey, three miles S. of London, has sprung up from the neighbouring brickfields within the last twenty years, and is now likely to become a place of great popularity." Brompton, Middlesex, "one mile and a half S.W. of London, is a hamlet of Kensington remarkable for the salubrity of its air. This neighbourhood has been vastly increased by new buildings of late years." Camberwell, two miles S. from London, "can boast of many respectable mansions, inhabited by citizens of vast

property, who resort hither for air and recreation. Camberwell Grove is a pleasant embowering [sic] walk, continued along

an ascent of half a mile." Chelsea, " a village in Middlesex, seated near the Thames, two miles W. of London, extends near to Hyde Park, and includes Knightsbridge." Clapham is " a village in Surry, near four miles S. of London, con- sisting chiefly of many handsome houses, which surround a common of about two hundred acres, that commands some pleasing views." Clapton is " a pleasing village " ; Dalston " a pleasant hamlet " ; Fulham a village four miles from London, connected with Putney by a " wooden " bridge ; Hammer- smith "a village in Middlesex four miles W. from London," having " many prospects of great beauty" in its neighbour- hood; Hampstead "a large and populous village," "the permanent residence of a respectable and extensive neighbour- hood "; Highgate" a popular hamlet " ; Holloway, Upper and Lower, are " two increasing hamlets." Hyde Park is " a celebrated park at the western extremity of the Metropolis."

Kentish Town is a village in the parish of Pancras, three miles N. from London, between London and Hampstead, having in its vicinity "many rural spots, which will be relished by the lovers of romantic scenery," the river Fleet flow- ing "at the back of the village." Knightsbridge is "the first village from London on the great Western road." New Cross, "since the construction of the Grand Surrey Canal has assumed an air of bustle and business." Paddington is "a village in Middlesex, one mile N.W. of London." From the "capacious basin " connected with its canal "a passage boat to Greenford Green, near Harrow, and to Uxbridge, sets off daily during the summer months at 8 o'clock in the morning, and returns in the evening and the extent of this unrifled* voyage to Uxbridge may be enjoyed for half-a-crown." Pancras is an extensive parish in Middlesex, one mile from Holborn Bars, containing " even towns, as Camden Town and Somers Town." Of Regent's Canal and Park it is said that "these important improvements of the north side of the Metropolis have been devised within these few years, and after a temporary suspension from want of money, are again in progress only a few villas have been erected, although nothing can be more inviting than this sublime spot" (sic). Somers Town "has been wholly built within the last forty years." Stratford, three and a half miles E. from London, is " the first village in Essex." From Streatham " a

mineral water of cathartic quality is sent in quan- tities to most of the hospitals in London." Vauxhall '

Gardens are "the most celebrated public gardens in Europe," and have nearly four pages devoted to them. Wiledon (i.e., Willesden) is a " retired village," the ride to which from Oxford Street is "one of the finest within so short a distance from London."

The volume, it must be observed, is printed on the splendid rag-paper of those days, as stout now as it was seventy-five years ago, the ink black, the print thoroughly legible. A very clear map is prefixed of the country twenty-five miles round London, which serves to explain what has been a puzzle to some,—how it is that postal London includes places like Perivale, which are still absolutely country. It would appear that the limits of postal London are those of the old twopenny post delivery, marked on the map by a coloured line.

• The italics are the author's, and refer probably to the moderateness of the fare. There is, of course, also an implied aim teaching, and how ignorant Mr. Dickens in his '• Dictionary of London" shows himself in his treatment of London Stone. Who in our prosaic days would compare the arches of South- wark Bridge to "so many rainbows " ? What Times corre- spondent — even from Johannesburg — ever rose to the dithyrambic height of seeing in the Royal Exchange the origin of the "rich blood and sinews that make England the envy and the dread of her surrounding neighbours and the wonder of the most distant parts of the earth "? Or who was the imaginative genius who saw in our Revolution "hypocrisy riding triumphant upon the back of credulity "? Alas ! the guide who took the ambulator by the hand seventy- five years ago remains anonymous.