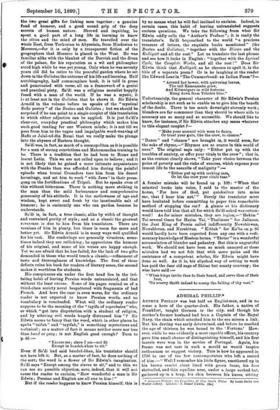 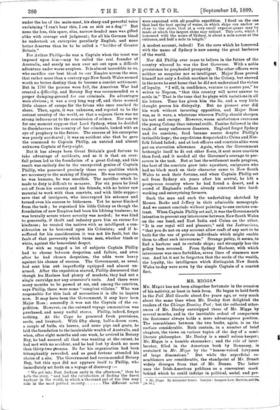 Page 15, 16 September 1899 — ADMIRAL PHILLIP.* ARTHUR PHILLIP was but half an Englishman, and
Close

ADMIRAL PHILLIP.* ARTHUR PHILLIP was but half an Englishman, and

in no sense a hero of the quarter-deck. His father, a native of Frankfort, taught German in the city, and though his mother's former husband had been a Captain of the Royal Navy, the chain which attached him to the sea misses a link. But his destiny was early determined, and before he reached the age of thirteen he was bound to the Fortune.' How- ever, while he was evidently a most capable officer, his country gave him small chance of distinguishing himself, and his first laurels were won in the service of Portugal. Again, his frame was not cast in such a mould as would inspire enthusiasm or suggest victory. This is how he appeared in 1796 to one of the few contemporaries who left a record of him :—" Well I remember his little figure, smothered up in his brown camlet cloak lined with green baize, his face shrivelled, and thin aquiline nose, under a large cocked hat, gathered up in a heap, his chin between his knees, sitting

• Admiral Phillip : the Founding of New South Wales. By Louis Becke and Walter Jeffery. Loudon : T. Fisher t nwln. Ps.] under the lee of the main-mast, his sharp and powerful voice exclaiming ' I can't bear this, I am as sick as a dog.'" But none the less, this spare, slim, narrow-headed man was gifted alike with courage and judgment; for all his German blood he undertook an enterprise peculiarly English, and none better deserves than be to be called a " builder of Greater Britain."

For Arthur Phillip—he was a Captain when the trust was imposed upon biin—may be called the real founder of Australia, and surely no man ever set out upon a difficult adventure under worse auspices. It is almost incredible to us, who sacrifice our best blood to our Empire across the seas, that rather more than a century ago New South Wales seemed worth no better destiny than to become a convict settlement. But in 1786 the prisons were full, the American War had

created a difficulty, and Botany Bay was recommended as a proper dumping-ground for our criminals. Its advantages were obvious ; it was a very long way off, and there seemed little chance of escape for the felons who once reached its

shore. Then, again, it was unknown, and reputed to be the outcast country of the world, so that a sojourn there was no

strong inducement to the commission of crimes. Nor can we for one moment suppose that Lord Sydney, when be decided to diseinbarrass the country of her criminals, looked with an eye of prophecy to the future. The success of his enterprise was purely accidental ; it was an accident also that he gave the command to Captain Phillip, an untried and almost unknown Captain of forty-eight.

But it has always been Great Britain's good fortune to take advantage of accidents, and so it is that an over- full prison led to the foundation of a great Colony, and this result was entirely due to the unexpected genius of Captain Phillip, who possessed precisely those rare qualities which are necessary to the making of Empires. He was courageous, he was humane, he was unselfish. The sacrifice which he made to duty is difficult to measure. For six years he lived cut off from his country and his friends, with no better raw material to work with than convicts, and with little suppoi t save that of intriguers, who interrupted his schemes and turned even his success to bitterness. Yet he never flinched from the task ; be organised his little Colony as though the foundation of new Empires had been his lifelong business ; he was brutally severe where severity was needed; he was kind to generosity, if thrift and industry gave him an excuse for kindness ; he treated the natives with as intelligent a con-

sideration as he bestowed upon his Colonists; and if he suffered for his consideration it was not his fault, but the fault of that perversity which turns men, whether black or white, against the benevolent despot.

For with so ragged a lot of subjects Captain Phillip had to choose between despotism and failure, and even after he had chosen despotism, the odds were heavy against his chance of success. The Government, as usual,

had sent him out imperfectly equipped and almost un- armed. After the expedition started, Phillip discovered that

though his Marines had plenty of muskets, they had not a single cartridge nor any armourer's tools. And there were many months to be passed at sea, and among the convicts, says Phillip, there were some " compleat villains." Who was responsible for this lack of necessities it is idle to inquire now. It may have been the Government, it may have been Major Ross ; assuredly it was not the Captain of the ex- pedition. However, cn the outward voyage ammunition was purchased, and many useful stores. Phillip, indeed, forgot nothing. At the Cape he procured fresh provisions, seeds, and livestock. With fifty sheep, half-a-dozen cows, a couple of bulls, six horses, and some pigs and goats, he laid the foundation to the incalculable wealth of Australia, and when, after eight months and one week, he arrived in Botany Bay, he had secured all that was wanting at the outset, he had met with no accident, and he had lost by death no more than thirty-two p'ersons. So far his organisation had been triumphantly rewarded, and as good fortune attended his choice of a site. The Government had recommended Botany Bay, but this spot did not approve itself to Phillip, who immediately set forth on a voyage of discovery :-

" We got into Port Jackson early in the afternoon," thus he tells the story, "and had the satisfaction of finding the finest harbour in the world, in which a thousand sail of the line may ride in the must perfect security The different coves were examined with all possible expedition. I fixed on the one that had the best spring of water, in which ships can anchor so close to the shore that at a very small expense quays may be made at which the largest ships may unload. This cove, which I honoured with the name of Sydney, is about a mile across at the entrance, and half a mile in length."

A modest account, indeed! Yet the cove which he honoured with the name of Sydney is now among the great harbours of the world.

Nor did Phillip ever cease to believe in the future of the country whereof he was the first Governor. With a noble persistence he prophesied prosperity. The other officers were neither so sanguine nor so intelligent. Major Ross proved himself not only a foolish martinet in the Colony, but showed iu the news he sent home that he did not understand the virtue of loyalty. " I will, in confidence, venture to assure you," he writes to Nepean, " that this country will never answer to settle in." That is the tune that he plays with variations in all

his letters. Time has given him the lie, and a very little thought proves his disloyalty. But no pioneer ever did his work without incurring opposition, and Major Ross was, as it were, a whetstone whereon Phillip should sharpen his tact and energy. However, worse misfortunes overcame the young Colony than internal strife. Famine followed in the train of many unforeseen disasters. England forgot Sydney and its convicts; food became scarce despite Phillip's invincible hope; the expeditions despatched to China and Nor- folk Island failed ; and at last officers and convicts alike were put on starvation allowance. Again, when the Government bethought itself to fit out other fleets, it sent more convicts than food, and it needed all the Governor's courage to per- severe in the task. But at last the settlement made progress, the best of the convicts grew into squatters, emigrants who had no black mark on their character came to New South Wales to seek their fortune, and when Captain Phillip set sail from Sydney six years after his arrival, he left a prosperous country where he had found a desert, and a crowd of England's ruffians already converted into hard- working and enterprising farmers.

Such the man and such the undertaking sketched by Messrs. Becke and Jeffery in their admirable monograph. And we cannot conclude without pointing to one curious con- trast. When Captain Phillip set sail, it was the Government's intention to prevent any intercourse between New South Wales on the one hand, and East India and China on the other. "It is our royal will and pleasure," said the Instructions, " that you do not on any account allow craft of any sort to be built for the use of private individuals which might enable them to effect such intercourse." Strange policy, it seems, to find a harbour and to exclude ships ; and strangely has the policy been reversed. From Sydney Harbour, with which intercourse was once forbidden, seven lines of steamers now run. And let it not be forgotten that the seeds of the wealth, the loyalty, the intelligence which distinguish New South Wales to-day were sown by the simple Captain of a convict fleet.