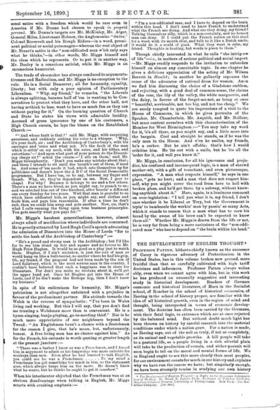 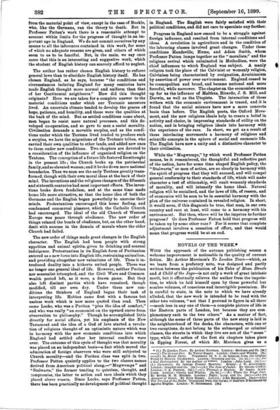 THE DEVELOPMENT OF ENGLISH THOUGHT.*

PROFESSOR PATTEN, hitherto chiefly known as the successor of Carey in vigorous advocacy of Protectionism in the United States, has in this volume broken new ground, more fruitful than that so carefully cultivated with high tariff doctrines and inferences. Professor Patten always writes ably, even when we cannot agree with him, but in this work he has produced an unusually suggestive and interesting study in historical development. Readers of German economic and historical literature, of Marx in the Socialist school, of Roscher in the school of historical economics, of Ihering in the school of history proper, are familiar with the idea of all historical growth, even in the region of mind and thought, being interpreted in terms of economic develop- ment. The doctrine has often been carried by the Germans, with their fatal logic, to extremes which are at once rejected by the balanced mind. But without doubt much light has been thrown on history by careful research into the material conditions under which a nation grew. For a nation is made, as Ihering says, out of the soil as truly, if not as completely, as its animal and vegetable growths. A bill people will take to a pastoral life, as a people living in a rich alluvial plain will take to the production of cereals, and eithervursuit will soon begin to tell on the moral and mental forms of life. We in England ought to see this more clearly than most peoples, for our environment counts for much in our history and explains why we have run the course we have ; but singularly enough, we have been strangely remiss in studying our own history The Development of'EnglIsh Thought : a Study In the Economic Interpreta- tion of lligtory. liv liinon N. Patten. P1 0.. Professor of Political Economy, Wharton school of Finance, University of Peons) Ivaula. New York : The M,c• nitMan Company. pea. net.]

from the material point of view, except in the case of Buckle, who, like the Germans, ran the theory to death. But in Professor Patten's work there is a reasonable attempt to account within limits for the progress of thought in an im- portant age in England. We do not commit ourselves by any means to all the inferences contained in this work, for some of which no adequate reasons are given, and others of which seem to us to be fanciful. But, in the main, we say once more that this is an interesting and suggestive work, which the student of English history can scarcely afford to neglect.

The author has rather chosen English history to enforce general laws than to elucidate English history itself. He has chosen England, as he says, because "the conditions and circumstances isolating England for many centuries have made English thought more normal and uniform than that of her Continental neighbours." How did this thought originate ? Here we are taken for a complete answer to the material conditions under which our Teutonic ancestors lived. An uncertain climate tended to develop the graces of hope, patience, and humility, and those were the qualities at the back of the mind. Bat as settled conditions came about, men began to resist mere natural processes, and this de- veloped co-operation, and so gave to men a social morality. Civilisation demands a movable surplus, and as the condi- tions under which the Teutons lived tended to produce such a surplus, we have the migrations of the Teutonic tribes, who carried their own qualities to other lands, and added new ones to them under new conditions. Two chapters are devoted to a consideration of the influence of organised religion on the Teutons. The conception of a future life fostered forethought in the present life ; the Church broke up the patriarchal family, and so elevated woman ; and it broke down mere national boundaries. Thus we soon see the early Teutons greatly trans- formed, though with their own moral ideas at the back of their mind. The inventions and the religious changes of the fifteenth and sixteenth centuries had most important effects. The inven- tions broke down feudalism, and at the same time made home life more attractive, so that the home idea of both the Germans and the English began powerfully to exercise their minds. Protestantism encouraged this home feeling, and condemned communal pleasure, which the Catholic Church had encouraged. The ideal of the old Church of Western Europe was peace through obedience. The new order of things relaxed the bonds of obedience, but, on the other hand, dealt with success in the domain of morals where the older Church had failed.

The new order of things made great changes in the English character. The English had been people with strong appetites and animal spirits, given to drinking and sensual indulgence. Protestantism in its English form of Puritanism entered as a new force into English life, restraining animalism, and providing altogether new valuations of life. Thus it in- troduced duality into a hitherto united people. There was no longer one general ideal of life. However, neither Puritan nor sensualist triumphed, and the Civil Wars and Common wealth period left, as it were, a drawn game. Bat they also left distinct parties which have remained, though modified, till our own day. Under these new con- ditions the thinkers of England began their task of interpreting life. Hobbes came first with a famous but useless work which is now more quoted than read. Then came Locke, who was a Puritan "plus the idea of comfort," and who was really "an economist on the upward curve from observation to philosophy." Though he accomplished little directly for social affairs, yet his emphasis of the New Testament and the idea of a God of love started a revolu- tion of religious thought of an optimistic nature which was in harmony with the new economic conditions into which England had settled after her internal conflicts were over. The outcome of this cycle of thought was that morality was placed on an independent basis—a fact which moved the admiration of foreign observers who were still subjected to Church morality—and the Puritan class was split in two. Professor Patten quaintly applies to the two classes names derived from American political slang,—" Mugwumps " and "Stalwarts," the former tending to quietism, thought, and !ompromise, the latter to action and race ideals which they placed above reason. Since Locke, says Professor Patten, there has been practically no development of political thought

in England. The English were fairly satisfied with their political conditions, and did not care to speculate any further.

Progress in England now ceased to be a struggle against foreign influence, and resulted from internal conditions and ideas. A revolution in agriculture and in the condition of the labouring classes involved great changes. Under these conditions Mandeville, Hume, and Adam Smith, whom Professor Patten lumps together as the " moralists," and the religious revival which culminated in Methodism, were the chief influences to which England was subject. A manly religion took the place of the Calvinist or womanly religion, Calvinism being characterised by resignation, Arminianism by assertion of power over environment. England ceased to be cosmopolitan and broad, and became national and more forceful, while narrower. The chapter on the economists sums up for us the influence of Malthus, Ricardo, J. S. Mill, and Darwin, as well as the Utopists. The interaction of these writers with the economic environment is traced, and it is found that the social sciences have now a more concrete basis than before. The English poets, the Oxford Move- ment, and the new religious ideals help to create a belief in activity and choice, in impressing standards of utility on the nation, and in bringing religious ideals into harmony with the experience of the race. In short, we get as a result of these interlacing movements a harmony of religious and scientific concepts in the sphere of social and economic life. The English have now a unity and a distinctive character to their civilisation.

While the "Mugwumps," by which word Professor Patten means, be it remembered, the thoughtful and reflective part of the nation, have for some time shaped English policy, the " Stalwarts," or men of action, are so clearly in harmony with the spirit of progress that they will succeed, and will compel general conformity to their standards of life, which will make character a test of citizenship, will exalt womanly standards of morality, and will intensify the home ideal. Natural religion will be socialised, and the laws of life, of reason, and of economics will be seen to be in essential harmony with the plan of the universe contained in revealed religion. In short, it would seem, if this diagnosis be true, that man, in our own country and race at least, will come to a harmony with his environment. But then, where will be the impetus to further progress ? Or does Professor Patten hold that progress will be taken up by some other race ? For it seems that complete adjustment involves a cessation of effort, and that would mean that progress would be at an end.