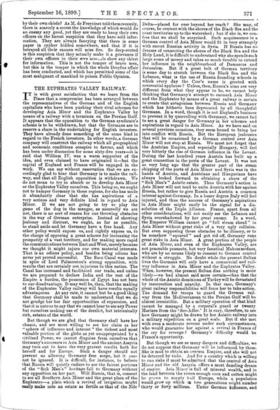 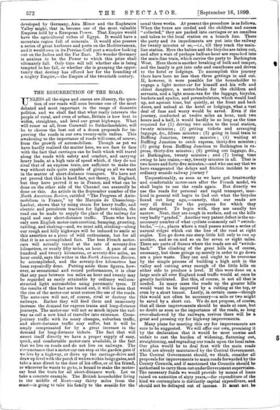 IT is with great satisfaction that we learn from the Times that a compromise has been arranged between the representatives of the German and of the English capitalists who have been pushing their rival schemes for developing Asia Minor and the Euphrates Valley by means of a railway with a terminus on the Persian Gulf. It appears that the opposition to the German syndicate's scheme is to be withdrawn, but that the Germans are to reserve a share in the undertaking for English investors. They have already done something of the same kind in regard to the French investors. In other words, a German company will construct the railway which all geographical and economic conditions conspire to favour, and which has been under discussion for some sixty-five years—it is said that William IV. was a warm supporter of the idea, and even claimed to have originated it—but the capital of England and France will be engaged in the work. We can say without reservation that we are ex- ceedingly glad to hear that Germany is to make the rail- way, and that all English opposition is withdrawn. We do not mean to try to absorb or to develop Asia Minor or the Euphrates Valley ourselves. This being so, we ought not to hamper Germany in those regions, for she has made it abundantly clear that she has aspirations of a very serious and very definite kind in regard to Asia Minor. If we are not going to try to play the game of the dog in the manger, as assuredly we are not, there is no sort of reason for our throwing obstacles in the way of German enterprise. Instead of showing jealousy and distrust, we ought, as far as possible, to stand aside and let Germany have a free hand. Any other policy would expose us, and rightly expose us, to the charge of opposing a great scheme for increasing the prosperity of a vast territory, and for making more rapid the communications between East and West, merely because we thought it might injure our own material interests. That is an odious policy, and besides being odious has never yet proved successful. The Suez Canal was made in spite of Lord Palmerston's strong opposition, with results that are certainly not injurious to this nation. The Canal has increased and facilitated our trade, and unless we are prepared to declare India and the rest of the Empire a burden, the possession of Egypt has not been to our disadvantage. It, may well be, then, that the making of the Euphrates Valley railway will have results equally advantageous. At any rate, it cannot but be a, good thing that Germany shall be made to understand that we do not grudge her her fair opportunities of expansion, and that it is untrue to say that we cannot bear to see any Power but ourselves making use of the derelict, but intrinsically rich, estates of the world.

But though we are glad that Germany shall have her chance, and are most willing to see her claim as her " sphere of influence and interest " the richest and most valuable portion of the globe as yet unappropriated by a civilised Power, we cannot disguise from ourselves that Germany'S successes in Asia Minor and the ancient Assyria may turn out to have the very gravest results both for herself and for Europe. Such a danger should not prevent us allowing Germany free scope, but it can- not be ignored. It is difficult, for instance, to believe that Russia will quietly endure to see the fairest portions of the " Sick Man's" heritage fall to Germany without any opposition on her part. Will Russia, that is, consent to see all Southern Asia Minor and the great plain of the Euphrates—a plain which a revival of irrigation might easily make into an estate as fertile as that of the Nile Delta—placed for ever beyond her reach ? She may, of course, be content with the shores of the Black Sea and the coast territories up to the watershed ; but if she is, we con- fess that we shall be surprised. Such acquiescence in a German control of Asia Minor would fit in very strangely with recent Russian activity in Syria. If Russia has no dreams of connecting the shores of the Black Sea and the Holy Land, it is difficult to understand why she spends such large sums of money and takes so much trouble to extend her influence in the neighbourhood of Damascus and Jerusalem. But if a. great belt of German territory is some day to stretch between the Black Sea and the Lebanon, what is the use of Russia founding schools in which every day the Czar's name is greeted with reverential applause ? Unless, then, Russia's aims are very different from what they appear to be, we cannot help thinking that Germany's attempt to earmark Asia Minor and the Euphrates by means of a great railway is certain to create that antagonism between Russia and Germany which has hitherto been deprecated by all thoughtful Germans. In a word, though it is not England's business to prevent it by quarrelling with Germany, we cannot fail to see a great danger for Germany in her schemes and aspirations in regard to Asia Minor. As we have said on several previous occasions, they seem bound to bring her into conflict with Russia. But the European jealousies that will be occasioned by a German control over Asia Minor will not stop at Russia. We must not forget that the Austrian Empire, and especially Hungary, will feel very bitterly the rise of German influence in the Levant. During the last hundred years Austria has built up a great connection in the ports of the Levant. It was not so very long ago that the greater part of the steam shipping of the ports of Asia Minor and Syria was in the bands of Austria, and Austrians and Hungarians have always looked forward. to obtaining a share of the " Sick Man's " Asiatic estate. Thus Germany's action in Asia Minor will not tend to unite Austria with her against Russia, but rather to give Russia and Austria a common interest against Germany. In a lesser degree Italy will feel injured, and thus the success of Germany's aspirations in Asia Minor might easily be the signal for a dis- solution of the Triple Alliance. France, apart from all other considerations, will not easily see the Lebanon and Syria overshadowed by her great enemy. In a word, the Emperor William cannot go "full steam ahead" in Asia Minor without great risks of a very ugly collision. But even supposing these obstacles to be illusory, or to be somehow " squared" and got rid off, Germany runs great risks in Asia Minor. A great portion of the people of Asia Minor, and even of the Euphrates Valley, are not peaceable peasants, but very fanatical Mahommedans, who are by no means likely to consent to German control without a struggle. No doubt while the present Sultan lives the Germans will only have a commercial and rail- way influence in Asia Minor and the Euphrates Valley. When, however, the present Sultan dies nothing is more likely—we had almost said more certain—than that the whole of the Asiatic dominions of Turkey will be devastated. by insurrection and anarchy. In that case, Germany's great railway responsibilities will force her to take action. The demand for troops to guard the German rail- way from the Mediterranean to the Persian Gulf will be almost irresistible. But a military operation of that kind cannot be managed by a corporal's guard or twenty Marines from the ' See-Adler.' It is easy, therefore, to see how Germany might be drawn by her Asiatic railway into a military expedition on a great scale. But if she met with even a moderate reverse under such circumstances, who would guarantee her against a revival in France of the cry for revenge ? Germany's difficulty would be France's opportunity.

But though we see so many dangers and difficulties, we do not suppose that Germany will be influenced by them. She is mad to obtain an oversea Empire, and she will not be deterred by risks. And for a country which is willing to run risks it must be admitted that the control of Asia Minor and the old Assyria offers a most dazzling dream of empire. Asia Minor is full of mineral wealth, and in the land between the rivers enough corn and cotton might be grown to supply half Europe, while a population would grow up which in two generations might number thirty or forty millions. Under German influence, and developed by Germany, Asia Minor and the Euphrates Valley might, that is, become one of the most valuable Empires held by a European Power. That Empire would have the agricultural riches of Egypt. It would have a mountain region full of minerals. It would also possess a, series of great harbours and porta on the Mediterranean, and it would own in its Persian Gulf port a window looking out on the Indies and the Far East. No wonder Germany is anxious to be the Power to which this prize shall ultimately fall. Only time will tell whether she is being tempted to her fall, or whether she is grasping the oppor- tunity that destiny has offered her for the founding of a mighty Empire,—the Empire of the twentieth century.