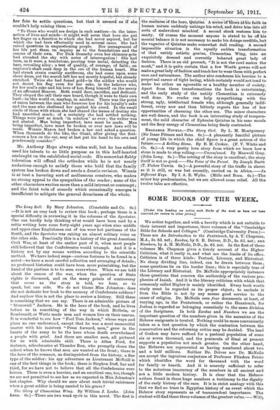 The Long Roll. By Mary Johnston. (Constable and Co. 6s.)

—It is not an easy task to review this book ; perhaps there is a special difficulty in reviewing it in the columns of the Spectator. One can hardly help thinking wt at would have been said by a critic writing here some forty-eight years ago when nine middle and upper class Englishmen out of ten were hot partisans of the South, and the Spectator was raising an almost solitary voice on the other side. Practically this is a history of the great American Civil War, at least of the earlier part of it, when most people still believed that the Confederates would triumph. And it is a history not by any means written according to the scientific method. We have indeed maps—curious features to be found in a novel—we have a most careful collection and arranging of details; no professed historian could have been more painstaking, but the hand of the partisan is to be seen everywhere. When we are told about the causes of the war, when the question of State rights is discussed, and on the many points of controversy that occur as the story is told, we hear, so to speak, but one side. We do not blame Miss . Johnston : does she not dedicate her book to the memory of Confederate soldiers ? And anyhow this is not the place to review a history. Still there is something that we can say. There is an admirable picture of 4- Stonewall " Jackson. He is the hero of the book, and he lives before us in something of the way in which Holbein, or Hembrandt, or Watts made men and women live on their canvas. It is wonderful to see how "Fool Tom Jackson," whose ways and plans no one understood, except that he was a most unmerciful master with his insistent "Press forward, men," grew in the hearts of the army to be the hero whose death overwhelmed a people with grief. And there are smaller men, all pictured for us with admirable skill. There is Allan Ford, for instance, schoolmaster at Thunder Run, who promptly closes the school when he knows that men are wanted at the front; there is the hero of the romance, as distinguished from the history, a fine type of the soldier: his spy adventure as Lieutenant McNeill is one of the best things in the book; there is Stephen Duff, liar and thief, for we have not to believe that all the Confederates were heroes. There is even a heroine, and an excellent one, too, though we are not permitted to see her as we expected in Miss Johnston's last chapter. Why should wo care about such trivial existences when a great soldier is being carried to his grave ?

The Glory of Clementina Wing. By William J. Locke. (John Lane. es.)—There are two weak spots in this novel. The first is the madnesa-of the hero, Quintus. A'series-Wilows athis faith int human nature suddenly unhinge his mind, and drive him into all sorts of malevolent mischief. A second shock restores him to sanity. Of course the moment anyone is stated to be off his mental balance it is not necessary to make his doings credible, but the vagaries of Quintus snake somewhat dull reading. A second, impossible situation. is the equally sudden transformation of that untidy artistic genius, Clementine Wing, into as exquisitely dressed and correctly behaved great lady of fashion. There is an old proverb, "It is not the cowl makes the monk," and it is quite certain that a few Worth gowns will not make a great lady of fashion and teach her to wear them with perfect ease and naturalness. The author also condemns his heroine to a. perpetual career of tight lacing, which certainly would not tend to make her either an agreeable or a healthy member of society. Apart from these transformations the book is entertaining, and the early study of the untidy Clementine is extremely well done. No reader can help sympathizing with the• strong, ugly, intellectual female who, although generally indif;• ferent, every now and then bitterly regrets the loss of her opportunities of charming the other sex. The minor characters are well drawn, and the book is an interesting study of tempera- ment, the mild character of Ephraim Quintus in his sane moods and the fiery energy of Clementine being finely contrasted.