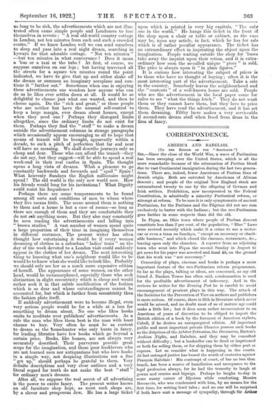 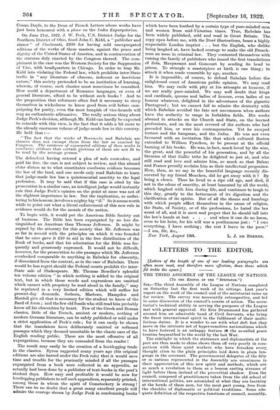 [To TEE EDITOR OF THE " SPECTATOR."] Sm,—Since the close of the World War, a wave of Puritanism has been sweeping over the United States, which is all the more remarkable because of the attenuation of Puritan blood due to vast Continental immigration during the last two genera- tions. There are, indeed, fewer Americans of Puritan than of Jewish origin. Both are outvoted by Americans of African descent ; and people of the original New England stock are outnumbered twenty to one by the offspring of German and Irish settlers. Prohibition, now incorporated in the Federal Constitution, is admittedly a minority Puritanical reform, or attempt at reform. To be sure it is only symptomatic of ancient Puritanism, for the Puritans and the Pilgrims did not use rum exclusively in barter with the Indians ; but the neo-Puritanism goes farther in some respects than did the old.

In Piqua, an Ohio town where people of Puritan descent constitute less than 2 per cent. of the population, " Blue " Laws were revived recently which make it a crime to use a motor- car or even a tram on Sundays, " except on necessary or charit- able business," and which closed the cinemas, restaurants, &c., leaving open only the churches. A reporter from an adjoining town who went into Piqua the second Sunday in August to get news for his paper was arrested and fined £5, on the ground that his work was " not necessary."

Censorship of plays, cinemas and books is perhaps a more important feature of the neo•Puritanism reform programmes. So far as the plays, talking or silent, are concerned, as my old friend J. Ranken Towse has often said, condemnation is used for the profitable advertisement of indecency. And in the reviews he writes for the Evening Poet he is careful to avoid encouragement of prurient plays in this way. The attack of the Societies for the Prevention of Vice on authors and publishers is more serious. Of course, there is filth in literature which never would be missed, and no doubt most of us of mature age could make a little list ; but it does seem rather inconvenient to an American of years of discretion to be obliged to import the British edition of a book by the foremost of American stylists, Cabell, if he desires an unexpurgated edition. All important public and most important private libraries possess such books as the Satyricon of the Arbiter Petronius, the Decameron, Burton's Arabian Nighty, and Rabelais, and they may be consulted without difficulty ; but a bookseller can be fined or imprisoned or both for selling them, or for shipping them by either post ox express. Let us consider what is happening in the courts, At last outraged justice has loosed the wrath of centuries against Francois Rabelais ! His contempt of court, of bar no lees than bench, has been a source of humiliation and annoyance to the legal profession always, for he had the temerity to laugh at gowns and ermine and bigwigs. Perhaps he laughs to-day in some sunny corner of Elysium while comforting Messire Boccaccio, who was condemned with him, by no means for the first time, for writing lewd tales ; and no one will be surprised if both have sent a message of sympathy, through Sir Arthur Conan Doyle, to the Dean of French Letters whose works have just been honoured with a place on the Index Expurgatorius.

On June 21st, 1922, J. W. Peck, U.S. District Judge for the Southern District of Ohio, fined John C. Kidd, a " publisher and sinner " of Cincinnati, £200 for having sold unexpurgated editions of the works of these masters, against the peace and dignity of the United States of America, and in contravention of the statutes duly enacted by the Congress thereof. The com- plainant in the case was the Western Society for the Suppression of Vice, with headquarters in Chicago. In order to trap Mr. Kidd into violating the Federal law, which prohibits inter-State traffic in " any literature of obscene, indecent or lascivious nature," this society pretended to be an institution of learning, wherein, of course, such classics must sometimes be consulted.

How could a department of Romance languages, or even of general literature, afford to be without such books ? And to the proposition that reformers often find it necessary to steep themselves in wickedness to know good from evil before cam- paigning for purity, even the most lumpish of vice-hounds will wag an enthusiastic affirmative. The really serious thing about Judge Peck's decision, although Mr. Kidd can hardly be expected to coincide with this view, is the fact that it adds a bit more to the already enormous volume of judge-made law in this country.

The fact that the works of Boccaccio and Rabelais are classics does not exempt them from the law as enacted by Congress. The existence of expurgated editions of these works is conclusive evidence that certain portions of them are not fit to be read by the average person."

The defendant having entered a plea of nolo contendere, and paid his fine, the case is not subject to review, and this absurd ()biter dictum as to what constitutes conclusive evidence becomes the law of the land, and one needs only read Rabelais to learn that judge-made law has a quintessential sanctity to the legal profession. It may be said that if this case is cited by the prosecution in a similar case, an intelligent judge would instantly

rule that Judge Peck's opinion on the point at issue was not of the slightest importance in law. But the implication, so unflat- tering to his honour, involves a mighty big " if." So it seems worth while to point out what a literal enforcement of this new rule in evidence would do for the morals of the nation.

To begin with, it would put the American Bible Society out of business. The Bible has been expurgated by no less dis- tinguished an American than Thomas Jefferson. It might be argued by the attorney for this society that Mr. Jefferson was so far in accord with the principles on which it was founded that he once gave it £10 to aid in the free distribution of the Book of books, and that his admiration for the Bible was fre- quently and generously expressed. It would not be difficult, however, for the prosecution to cite passages which Mr. Jefferson overlooked comparable to anything in Rabelais for obscenity, if dissociated from the context, as in the case of Rabelais. There would be less regret should the Federal courts prohibit the inter- state sale of Shakespeare. Mr. Thomas Bowdler's splendid ten volume edition " in which nothing is added to the original text, but in which those words and expressions are omitted which cannot with propriety be read aloud in the family," may be reprinted in a very limited edition which will suffice for present-day demands. Sothern, Marlowe, Hampden and Mantell give all that is necessary for the student to know of the Bard of Avon ; and the few old fossils who still read him probably know all his obscenities by heart. Few of the Greek and Roman classics, little of the French, ancient or modern, nothing of modern German literature, can be safely published or sold under a strict application of Peck's rule ; for it can easily be shown that the translators have deliberately omitted or softened passages which they deemed unsuitable to the chaste ears of the English reading public. These are the most offensive of all expurgations, because they are concealed from the reader !

The result may easily be the creation of a bootlegging trade in the classics. Byron suggested many years ago (bis original editions are also barred under the Peck rule) that it would save time and trouble for the pruriently minded if all the passages

expurgated from a book were collected in an appendix, as actually had been done by a publisher of text-books in the poet's student days. How easy and profitable it would be now for

among those in whom the spirit of Comstockery is strong ! There can be no doubt that a great many excellent people will admire the courage shown by Judge Peck in condemning books

which have been loathed by a certain type of pure-minded men and women from mid-Victorian times. True, Rabelais has been widely published, sold and read in Great Britain. The copy open before me, with the Dore illustrations, bears a highly respectable London imprint . . . but the English, who dislike being laughed at, have lacked courage to make the old French. man an issue in criminal law. They contented themselves with ruining the family of publishers who issued the first translations of Zola, Maupassant and Goncourt by sending its head to prison. To strangle a masterpiece at birth is one thing ; to attack it when made venerable by age, another.

It is impossible, of course, to defend Rabelais before the enlightened court of American public opinion. We may read him. We may smile with pity at his attempts at humour, if we are really pure-minded. We may well doubt that kings and cardinals, queens and ladies of honour, even ladies of no honour whatever, delighted in the adventures of the gigantic Pantagruel ; but we cannot fail to admire the dexterity with which Rabelais avoided the fate not uncommon when authors have the audacity to range in forbidden fields. His works abound in attacks on the Church and State, on the learned professions, and on the most revered of the authors who had preceded him, or were his contemporaries. Yet he escaped torture and the hangman, and the Index. He was not even favoured with an invitation like that which cultured Boston extended to William Pynchon, to be present at the official burning of his books. He was, in fact, much loved by the wise, the great, and the powerful of his generation, and by all the literates of that Gallic tribe he delighted to jest at, and who still read and love and admire him, so much so that Balzao and France proudly acclaim him as their intellectual progenitor. How, then, as we say in the beautiful language recently dis- covered by my friend Mencken, did he get away with it ? By being a clown. Thus he lived to a ripe old age, and died, not in the odour of sanctity, at least lamented by all the world, which laughed with him during life, and continues to laugh to this day, greatly to the betterment of its digestion and the clarification of its spirits. But of all the shams and humbugs with which people afflict themselves in the name of religion, the State, of Society, or of the professions, he hated the law worst of all, and it is meet and proper that he should fall into the law's hands at last . . . and when it can do no harm, even to his heirs, for his will was a posthumous jest : " I owe everything, I have nothing ; the rest I leave to the poor." —I am, Sir, &c.,