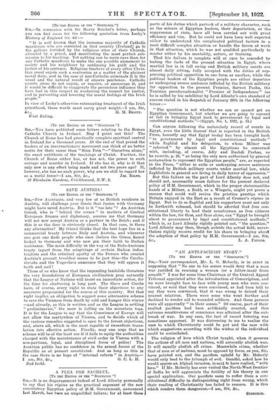 Six,—In connexion with Sir Harry Reichel's letter, perhaps you can find room for the following quotation from Lecky's History of England (vi. 41) :-

" It is well known that the immense majority of Catholic murderers who are convicted in that country [Ireland] go to the gallows fortified by the religious rites of their Church, attended by a priest, and manifesting the most perfect sub- mission to his teaching. Yet nothing can be more rare than for any Catholic murderer to make the one possible atonement to society and his neighbour by confessing his guilt and the justice of his sentence. Religious teachers of every other Chris- tian creed enjoin such a confession as a matter of the plainest moral duty, and in the case of non-Catholic criminals it is the usual and the natural result of sincere penitence. Catholic priests alone do not enjoin, or require, or encourage it, and it would be difficult to exaggerate the pernicious influence they have had in this respect in weakening the respect for justice, and in perverting and lowering the moral feelings of the Irish people."

In view of Lecky's otherwise extenuating treatment of the Irish priesthood, these words must carry great weight.—I am, Sir,