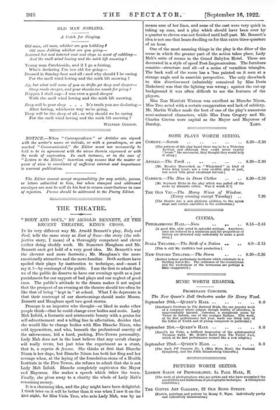 [Smetana's Overture to The Bartered Bride, the one popular work of a composer whose output, though worthy of attention, is unaccountably ignored. Juanita, a symphonic poem by

Victor de Sabata, one of the younger I . This work, at its first performance last year, made one think only of the follies of Youth and of young composers in particular.] September 21st.—QUEEN'S HALL .. 8.0

which at its first performance seemed like a new religion.] September 22nd.—QUEEN'S HALL .. 8.0

[The Bach PI' Concerto No. 1 (Miss Myra Hess), the Pastoral Symphony, and the Fifth Brandenberg Concerto.]