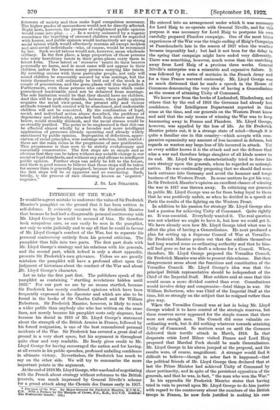 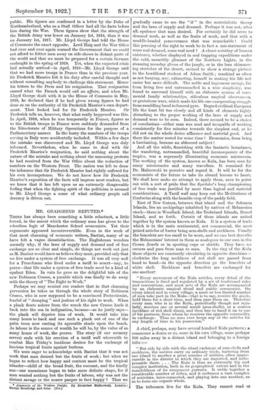 INTRIGUES OF THE WAR.*

IT would be a great mistake to underrate the value of Sir Frederick Maurice's pamphlet on the ground that it has been written in self-defence. It evidently occurred to Sir Frederick Maurice that because he had had a disagreeable personal controversy with Mr. Lloyd George he would be accused of bias. He therefore took scrupulous care, as can easily be seen in the pamphlet, not only to write judicially and to say all that he could in favour of Mr. Lloyd George's conduct of the War, but to separate his personal controversy entirely from his general criticism. The pamphlet thus falls into two parts. The first part deals with Mr. Lloyd George's strategy and his relations with his generals, and the second part, which indeed is only a short appendix, presents Sir Frederick's own grievance. Unless we are greatly mistaken the pamphlet will have a profound effect upon the judgment of historians about the conduct of the War and about Mr. Lloyd George's character.

Let us take the first part first. The publishers speak of the pamphlet as containing " startling revelations hidden until 1922." For our part we are by no means startled, because Sir Frederick has merely confirmed opinions which have been frequently expressed in the Spectator and which are also to be found in the books of Sir Charles Callwell and Sir William Robertson. Sir Frederick Maurice, however, is likely to reach a wider public than anybody else who has written on the same lines, not merely because his pamphlet costs only sixpence, but because his denial in 1918 of Mr. Lloyd George's statement about the strength of the British Armies in France, followed by his forced resignation, is one of the best remembered personal Incidents of the War. Sir Frederick has covered a great deal of ground in a very short space, but his argument is throughout quite clear and very readable. He freely gives credit to Mr. Lloyd George for having encouraged the nation and for having, at all events in his public speeches, professed unfailing confidence in ultimate victory. Nevertheless, Sir Frederick has much to say on the other side. We will try to summarize the more important points in the argument.

At the end of 1916 Mr. Lloyd George, who was fond of negotiating with the French about strategy without reference to the British generals, was much impressed by General Nivelle's scheme for a grand attack along the Chemin des Dames early in 1917.

• Intrigues of the War. By Major-General Six Frederick Maurice, S.C.M.G., O.B. With a Preface by the Marquis of Crewe, P.C., MG., 0.0.1/.0, London: The Weetntinster Gazette. [6a.i He entered into an arrangement under which it was necessary for Lord Haig to co-operate with General Nivelle, and for this purpose it was necessary for Lord Haig to postpone his own carefully prepared Flanders campaign. One of the most bitter experiences of the War was the tragic ending of Haig's Campaign. at Passchendaele late in the season of 1917 when the weather

became impossibly bad ; but had it not been for the delay in the spring that campaign might have ended very differently.

There was something, however, much worse than the snatching away from Lord Haig of a precious three weeks. General Nivelle's enterprise was a miserable and expensive failure. It was followed by a series of mutinies in the French Army and for a time France wavered ominously. Mr. Lloyd George was so much distressed that he made a speech in the House of Commons denouncing the very idea of having a Generalissimo as the means of attaining Unity of Command.

We know now from the books of Ludendorf, Hindenburg, and others that by the end of 1916 the Germans had already lost confidence. Our Intelligence Department reported in that sense at the time, and our generals on the Western Front knew and said that the only means of winning the War was to keep hammering away in France and Flanders. Mr. Lloyd George,

however, was appalled by the loss of life. As Sir Frederick Maurice points out, it is a strange state of mind—though it is

quite a familiar one in this country—which accepts with com- parative equanimity any amount of loss incurred in defence, but regards as wanton any large loss of life incurred in attack. Yet as every soldier knows it is the attack and not the defence that wins a war and therefore brings slaughter of all kinds nearer to its end. Mr. Lloyd George characteristically tried to force his own strategy upon the generals, whom he regarded as unimagi.

native. He was continually proposing that we should find some back entrance into Germany and avoid the hammer and tongs business of the Western Front. In some matters he got his way.

In Sir Frederick Maurice's opinion an excellent chance of winning the war in 1917 was thrown away. In criticizing our generals in public Mr. Lloyd George was so far from being loyal to them that he was positively unfair, as when he derided in a speech at Paris the results of the fighting on the Western Front.

In addition to his passion for strategy Mr. Lloyd George also had a passion for achieving Unity of Command. Quite rightly so. It was essentiaL Everybody wanted it. The real question was not whether we ought to have it, but how we could get it. We have already seen how Mr. Lloyd George tried what was in effect the plan of having a Generalissimo. He next produced a plan for setting up a Supreme Council of War at Versailles. Sir Frederick Maurice points out that the soldiers themselves had long wanted some co-ordinating authority and that he him- self had gone so far as to draft a scheme for a Council. When, therefore, Mr. Lloyd George proposed the Versailles Council, Sir Frederick Maurice was able to present this scheme. But then disagreement arose about the functions and constitution of the Versailles Council. Mr. Lloyd George's idea was that the principal British representative should be independent of the Chief of the Imperial Staff. Most soldiers said at once that this would mean a more divided control than ever. Consultations would involve delay and compromise—fatal things in war. Sir William Robertson, who was Chief of the Imperial Staff at the time, felt so strongly on the subject that he resigned rather than give way.

When the Versailles Council was at last in being Mr. Lloyd George wished it to have control of the strategic reserves, but these reserves never appeared for the simple reason that there were not enough men. The Council did some valuable co- ordinating work, but it did nothing whatever towards attaining Unity of Command. So matters went on until the Germans delivered their terrific attack in March, 1918. In that desperate crisis Lord Milner visited France and Lord Haig proposed that Marshal Foch should be made Generalissimo. Mr. Lloyd George in his alarm jumped at the proposal, and the results were, of course, magnificent. A stranger would find it difficult to believe—though in sober fact it happened—that the political friends of Mr. Lloyd George then declared that at last the Prime Minister had achieved Unity of Command by sheer pertinacity, and in spite of the persistent opposition of the generals, and that he was, in fact, " the man who won the War."

In his appendix Sir Frederick Maurice states that having tried in vain to prevail upon Mr. Lloyd George to do him justice with regard to the controversy about the numbers of the British troops in France, he now feels justified in making his case public. His figures are confirmed in a letter by the Duke of Northumberland, who as a Staff Officer had all the facts before him during the War. These figures show that the strength of the British Army was lower on January 1st, 1918, than it was on January let, 1917. Mr. Lloyd George had told the House of Commons the exact opposite. Lord Haig and the War Office had over and over again warned the Government that we could not afford to fritter men away on side-shows in distant parts of the world and that we must be prepared for a certain German onslaught in the spring of 1918. Yet, when the expected crisis had actually arrived—in April, 1918—Mr. Lloyd George said that we had more troops in France than in the previous year. Sir Frederick Maurice felt it his duty after careful thought and without consulting anybody to challenge this statement. Hence his letters to the Press and his resignation. That resignation caused what the French would call an affaire, and when Mr. Lloyd George dealt with it in the House of Commons in May, 1918, he declared that if he had given wrong figures he had done so on the authority of Sir Frederick Maurice's own depart- ment. That looked bad for Sir Frederick Maurice. Sir Frederick tells us, however, that what really happened was this. In April, 1918, when he was temporarily in France, figures as to the British troops in France were suddenly demanded from the Directorate of Military Operations for the purpose of a Parliamentary answer. In the hurry the numbers of the troops serving in Italy were accidentally included. Within a few days the mistake was discovered and Mr. Lloyd George was duly informed. Nevertheless, when he came to deal with Sir Frederick Maurice's resignation, he said nothing about the nature of the mistake and nothing about the unceasing protests he had received from the War Office about the reduction of numbers on the Western Front. The nation was left to draw the inference that Sir Frederick Maurice had rightly suffered for his own incompetence. We do not know how Sir Frederick Maurice's exposition of the facts will impress most readers, but we know that it has left upon us an extremely disagreeable feeling that when the fighting spirit of the politician is aroused in Mr. Lloyd George a sense of what ordinary people call decency is driven out.