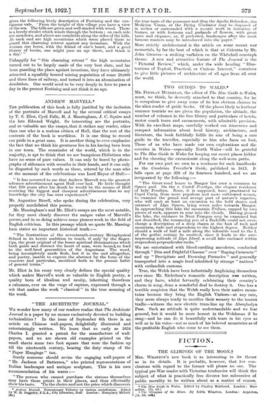 THE publication of this book is fully justified by the inclusion of the portraits of Marvell and by the several critical essays by T. S. Eliot, Cyril Falls, H. J. Massingham, J. C. Squire and the late Edward Wright. So interesting are the portraits, and so valuable are the essays, that it strikes any reader, other than one who is a zealous citizen of Hull, that the rest of the contents of the book is worthless. It is one thing to record our pride in a great man. It is another thing to over-emphasize the fact that we think his greatness lies in his having been born in our town. The remainder of the world, which is in the majority, is apt to think that we are bumptious Philistines who have no sense of pure values. It can only be bored by photo- graphs of aldermen with wreaths in their hands, and it can only be disgusted by such words as these, uttered by the man who at the moment of the celebrations was Lord Mayor of Hull: " It has occurred to me that Andrew Marvell was the greatest advance advertisement agent Hull over had. He little thought that 250 years after his death he would be the means of Hull receiving the biggest and cheapest advertisement that to my knowledge the city has ever experienced."

Mr. Augustine Birrell, who spoke during the celebration, very properly annihilated this person.

Mr. Massingham's and Mr. Eliot's essays are the most notable, for they most clearly discover the unique value of Marvell's poems, and in so doing achieve some pioneer work in the field of English criticism. In this passage which we quote Mr. Massing- ham states an important historical truth :-

" The frustrations of the seventeenth-century Metaphysical School in its heroic ambition to touch, if only by the finger- tips, the great original of the lesser spiritual ilhuninations which both guide and distract the heart of man, were bound, to lead to the well-bred generalities of the Augustan. The word, being incompletely made flesh, lost it in the end altogether, and poetry, unable to express the abstract by the form of the concrete and particular, sacrificed both to the prosaic habit of general terms."

Mr. Eliot in his essay very clearly defines the special quality which makes Marvell's work so valuable to English poetry, a quality born of idealism and sanity, inheriting therefrom a calmness, ever on the verge of rapture, expressed through a wit that makes the work " classical " in the true meaning of the word.