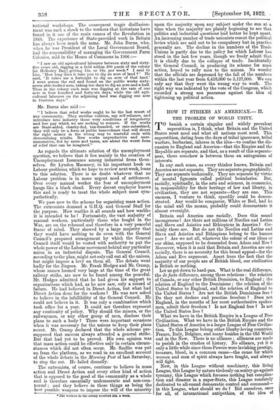 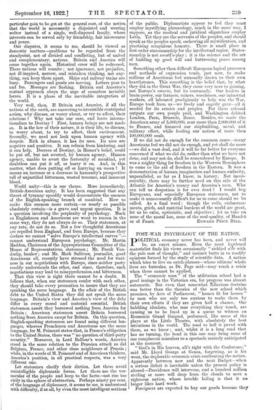 I think, what Britain and the United States most need and what all nations most need. This superstition, dating from the days of tribal ignorance, tribal warfare, barbarism, inheres in the idea—to confine the dis- cussion to England and America—that the Empire and the Republic are separate, and that, as a result of this separate- ness, there somehow is between them an antagonism of interests.

In any such sense, as every thinker knows, Britain and America are not separate. They are separate geographically. They are separate technically. They are separate by virtue of mental figments called political boundaries. But, racially, spiritually, in the arts and sciences, in economics, in responsibility for their heritage of law and liberty, in civilization, they are not separate—they are one. This oneness, I venture to think, speedily could be demon- strated. Any would-be conqueror, White or Red, had ho the mind and the means, probably could demonstrate it almost overnight.

Britain and America one racially. Does this sound incongruous ? Are there not millions of Nordics and Latins and Slays and Asiatics and Ethiopians in America ? Cer- tainly there are. But do not the Nordics and Latins and Slays and Asiatics and Ethiopians belong to the human race ? Are we not all, whatever the colour of our ideas or our skins, supposed to be descended from Adam and Eve ? Moreover, when it is said that Britain and America are one racially, there is no necessity for this broad appeal—for the Adam and Eve argument. Apart from the fact that the majority of our people are of British blood, our civilization is British or nothing.

What we have in the British Empire is a League of Free Civilization. What we have in the British Empire and the United States of America is a larger League of Free Civiliza- tion. To this League belong other liberty-loving countries, France, Italy, Belgium, and many besides in the Old World and in the New. There is no alliance ; alliances are made to perish in the crushes of history. No affiance, yet it is only a little while since these Powers were lavishing prestige, treasure, blood, in a common cause—the cause for which women and men of spirit always have fought, and always will fight. Now, in this League without machinery, this living League, this League by nature tirelessly on sentry-go against tyranny, this League which foresees nothing but complica- tion and disaster in a super-State, thisL e resolutely dedicated to all-round democratic controlaer command— in this League, what should we do ? Rid ourselves, once for all, of international antipathies, of the idea of particular gain to be got at the general cost, of the notion that the world is necessarily a disjointed and warring welter instead of a single, well-disposed family, whose interests can be served only by friendship, fair intercourse and peace. Our disputes, it seems to me, should be viewed as domestic matters—problems to be regarded from the standpoint, not of divided and conflicting, but of united and complementary, nations. Britain and America will come together again. Historical error will be redressed. These nations will reunite ; not ignorance, not prejudice, not ill-inspired, narrow, and mistaken thinking, not any- thing, can keep them apart. Ships and railway trains are busy. Passengers and goods are moving. Letters pass to and fro. Messages are flashing. Britain and America's mutual approach obeys the urge of countless invisible forces. It is a phase of the inevitable integration of the world.

Very well, then. If Britain and America, if all the nations of the earth, are answering to irresistible centripetal action, why discuss, or worry about, or try to affect, their relations ? Why not take our ease, and leave interna- tionalism to Destiny ? First, human beings are not made so. It is the law of their nature, it is their life, to discuss, to worry about, to try to affect, their environment. Secondly, we need not look upon human agency with despair. Rich in abuses, it has its uses. Its uses are negative and positive. It can refrain from hindering, and it can help. Decrees of Destiny, in Homer's belief, could be put off, but not averted, by human agency. Human agency, unable to avert the fraternity of mankind, yet doubtless can put it off, or hurry it on. And, in this matter, what does putting off or hurrying on mean ? It means an increase or a decrease in humanity's prospective toll of unjustified bitterness, wasted treasure, and innocent blood.

World unity—this is our theme. More immediately, British-American unity. It has been suggested that any threat of tyranny speedily would demonstrate the oneness of the English-speaking branch of mankind. How to make this oneness more certain—as nearly as possible absolutely certain—is a grave and urgent question. It is a question involving the perplexity of psychology. Much as Englishmen and Americans are wont to reason in the same way, they do not always do so. Their statesmen, at any rate, do not do so. Not a few thoughtful Americans are repelled from England, and from Europe, because they declare we cannot " solve Europe's intellectual curves "- cannot understand European psychology. Mr. Martin Madden, Chairman of the Appropriations Committee of the House of Representatives, statesman ; Mr. Frank Van- derlip, banker ; and Mr. Mark Sullivan, journalist, good Americans all, recently have stressed the need for wari- ness in our negotiations with Europe, since neither party readily understands the other, and since, therefore, such negotiations may lead to misapprehension and bitterness. That this view is right there cannot be a doubt. It follows that, when our statesmen confer with each other, they should take every precaution to insure that they are speaking the same language. In the affair of the British debt to the United States they did not speak the same language. Britain's view and America's view of the debt differ in every moral and material essential. British statesmen assert they borrowed nothing from America for Britain ; American statesmen assert Britain borrowed nothing from America except for Britain. On this question, English-speaking statesmen are found using different lan- guages, whereas Frenchmen and Americans use the same language, for M. Poincare states that, in France's obligation to the United States, there was " no question of third-party security." Moreover, in Lord Balfour's words, America stood in the same relation to the Prussian attack as did Belgium, France, and other close neighbours of Prussia ; while, in the words of M. Poincare and of American thinkers, America's position, in all practical respects, was a very different one.

Let statesmen clarify their diction. Let them avoid unintelligible diplomatic forms. Let them use the ver- nacular of the people and keep to the facts—not rise too airily in the sphere of abstraction. Perhaps ninety per cent. of the language of diplomacy, it seems to me, is understood with difficulty, if at all by even the most intelligent sections of the public. Diplomatists appear to feel they must employ mystifying phraseology, much in the same way, I suppose, as the medical and juridical oligarchies employ Latin. Yet they are the servants of the peoples, and should speak as the peoples speak, eschewing all mystification, and practising scrupulous honesty. There is small place in first-order statesmanship for the intellectual rapier. States- manship is not sword's-play ; it is the science and the art of building up good will and buttressing peace among men.

Something other than difficult European logical processes and methods of expression tends, just now, to make millions of Americans feel unusually drawn to their own hearthstones. This something is the belief that, by what they did in the Great War, they came very near to gaining, not Europe's esteem, but its contumely. Our leaders in brain-power, our farmers, miners, woodsmen, our industrial workers, all laboured prodigiously to help win the War. Europe took from us—we freely and eagerly gave—all it needed for its armies and peoples. For these colossal outputs our own people paid, and Washington debited London, Paris, Brussels, Rome. Besides, we made the American army of 5,000,000, sent more than 2,000,000 of it to France, and financed our shipbuilding, naval, and military effort, while feeding our nation of more than 100,000,000 souls.

If we did not do enough for the common cause—many Americans feel we did not do enough, and yet shall do more —we did a vast deal, and it will be far better for everyone concerned if what we did do, rather than what we have not done, and may not do, shall be remembered by Europe. It was a mighty thing for freedom in the Western Hemisphere to come to the aid of freedom in the Eastern. It was a demonstration of human imagination and human audacity, unparalleled, so far as I know, in history. Not incon- ceivably, there may be further need on this side of the Atlantic for America's money and America's men. Who can tell us despotism is for ever dead ? I would beg Europeans, and especially European statesmen, not to make it unnecessarily difficult for us to come should we be called. As a final word : though the evils, embarrass- ments, griefs, and material burdens of the world are great, let us be calm, optimistic, and objective ; let us take on none of the moral hue, none of the soul-quality, of Hamlet