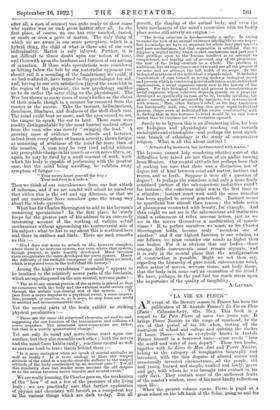 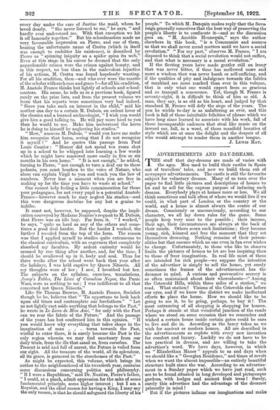 AN event of the literary season in France has been the publication of M. Anatole France's La Vie en Fleur (Paris : Calmann-Levy, 6frs. 75c.). This book is a sequel to Le Petit Pierre of some two years ago. It brings Pierre Noziere to the verge of manhood, to the eve of that period of his life when, casting off the restraints of school and college and quitting the shelter of home, Pierre—who as everybody knows is Anatole France himself in a borrowed name—must needs " into the world and wave of men depart." These two books, together with Le Livre de Mon Anti and Pierre Noziere, belong to the category of imaginative biography and introduce, with the thin disguise of altered names and occasionally invented circumstance, all the people, old and young, learned and simple, exalted and lowly, .grave and gay, with whom he was brought into contact in his early days. They contain some of the mellowest fruits of the master's wisdom, some of his most kindly reflections upon life. When the present volume opens, Pierre is pupil at a great school on the left bank of the Seine, going to and ho every day under the care of Justine the maid, whom he loved dearly. " She never listened to me," he says, " and hardly ever understood me. With that exception we hit it off famously together." But his schoolmasters made no very favourable impression on Pierre, and one of them, bearing the unfortunate name of Crottu (which in itself was enough to embitter his existence), is described by Pierre as " spinning iniquity as a spider spins its web." Even at this stage m his career he deemed that the only unpardonable crimes were the crimes against beauty, and in this respect, no less than in the malevolent injustice of his actions, M. Crottu was found hopelessly wanting. For all his erudition, then—and who ever wore the mantle of the scholar with such ease and grace ?—for all his erudition, M. Anatole France thinks but lightly of schools and school- masters. His name, he tells us in a previous book, figured rarely on the prize lists, and from the present volume we learn that his reports were sometimes very bad indeed. " Since you take such an interest in the child," said his mother one day to a certain M. Dubois, an ardent lover of the classics and a learned archaeologist, " I wish you would give him a good talking to. He will pay more heed to you than he would to me. Make him understand the harm he is doing to himself by neglecting his studies." " How," answers M. Dubois, " would you have me make him recognize that harm, seeing that I do not recognize it myself ? " And he quotes this passage from Paul Louis Courier : " Homer did not spend ten years shut up in a school to be whipped into learning a few words which he might have mastered more easily in five or six months in his own home." " It is not enough," he added, turning to Pierre, " not enough to turn a deaf ear to these pedants, you must hearken to the voice of Nature, who alone can explain Virgil to you and teach you the law of numbers. Never lose a moment when you are free in making up for the time you have to waste at school." One cannot help feeling a little commiseration for those poor pedagogues, for not every pupil is a potential Anatole France—however much he may neglect his studies—and this were dangerous doctrine for any but a genius to imbibe.

It must not, however, be supposed, despite the impli- cation conveyed by Madame Noziere's request to M. Dubois, that Pierre was an idle boy. Far from it. " I worked," he says, " quite as hard as any of the others and some- times a good deal harder. But the harder I worked, the further I receded from the top of the form. The reason was that I applied myself to studies quite extraneous to the classical curriculum, with an eagerness that completely absorbed my faculties. My ardent curiosity would be aroused by one thing after another, and, for the time, I should be swallowed up in it, body and soul. Thus for three weeks after the school went back that year after the holidays, I was held captive by Queen Nitocris. All my thoughts were of her ; I saw, I breathed but her. The subjects on the syllabus, exercises, translations, Aesop's Fables, The Lives of Cornelius Nepos, the Punic Wars, were as nothing to me ; I was indifferent to all that concerned not Queen Nitocris."

Like Sir Thomas Browne, M. Anatole France, Socialist though he be, believes that " 'Tis opportune to look back upon old times and contemplate our forefathers." " Let us not lightly cast aside anything that belongs to the Past," he wrote in Le Livre de Mon Ami, " for only with the Past can we rear the fabric of the Future." And the passage of the years has but confirmed him in this opinion. " If you would know why everything that takes shape in the imagination of man . . . turns towards the Past, wistful to enter there, it is surely because the Past is the only region wherein we may find sanctuary from our daily trials, from the ills that assail us, from ourselves. The Present is arid and full of unrest, the Future is veiled from our sight. All the treasure of the world, all its splendour, all its grace, is garnered in the storehouses of the Past." As might be expected, this volume, which brings its author to the neighbourhood of his twentieth year, contains some discussions concerning politics and philosophy. " If I were a Republican," said Dr. Noziere, Pierre's father, " I could, at. a pinch, admit oppression for the sake of some fundamental principle, some higher interest ; but I am a Royalist, and the chief reason for having a King, I may say the only reason, is that he should safeguard the liberty of his people." To which M. Danquin makes reply that the Bove, reign generally conceives that the best way of preserving the people's liberty is to confiscate it—and so the discussion goes on. " M. Amedee Hennepin," says the author elsewhere in this book, " is a Communist and assures us that we shall never mend matters until we have a social revolution." " For my part," observes M. France, " I am disposed to think that a social revolution would not suffice, and that what is necessary is a moral revolution." If the fleeting years have made gentler still an irony that was never bitter, if time has mellowed more and more a wisdom that was never harsh or sell-sufficing, and if the qualities of pity and indulgence towards the foibles of mankind are more marked than ever in this volume, that is only what one would expect from so gracious and so tranquil a senescence. Yet, though M. France is seventy-eight, it is difficult to think of him as old. A man, they say, is as old as his heart, and judged by that standard M. France will defy the siege of the years. The pen he wields to-day is as unfaltering as ever, and this book is full of those inimitable felicities of phrase which we have long since learned to associate with his work, full of those incomparable cadences that steal like music on the inward ear, full, in a word, of those manifold beauties of style which are at once the delight and the despair of all who would attempt to render them in another tongue.